Long gone are the days of the permissive consensus that brought Hungary into the European Union on a wave of support from all the country’s mainstream political parties. And far faded are the initial years of its EU membership, when as a policy-taker Hungary tried to constructively fit into and, where able, to shape its new political home. Over the past eight years not only has a clear division developed between Europhile and Eurosceptic parties (governing party Fidesz among the latter), the country also assumed the role of disruptive veto player on the European scene. The findings of ECFR’s EU28 Survey confirm this great shift in perceptions of Hungary: across the EU, experts consider that the country now shows no signs of commitment to deepening European integration. Moreover, in September 2018 the European Parliament voted to adopt the Sargentini Report, which criticised the state of democracy in Hungary. A significant share of parliamentarians from the European People’s Party – Fidesz’s political family – backed adoption. This vote signalled that the former frontrunner of democratisation has visibly diverged from the values and principles the EU is built on.

Hungary’s image has sorely deteriorated, but the Orbán government thrives in this situation, and is thus unlikely to change its strategy in 2019.

His anti-EU campaigns and rhetoric show that Hungary’s prime minister, Viktor Orbán, looks on the EU as an arena for fighting political battles for domestic consumption rather than as a platform for constructive cooperation. His government now brands any criticism from the EU institutions, fellow governments, or even political allies in the EPP, as nothing but outright attacks on the Hungarian nation itself. It is commonplace to say that Hungary has become a black sheep of the EU, but the results of the EU28 Survey show how correct this conclusion is. Despite the often frustrating cluelessness of the United Kingdom in its Brexit negotiations, Hungary has still managed to surpass Britain as the most “disappointing” member state, in the eyes of respondents. Disappointment with Hungary ranked especially high among the EU’s founding members and its affluent mid-sized states. 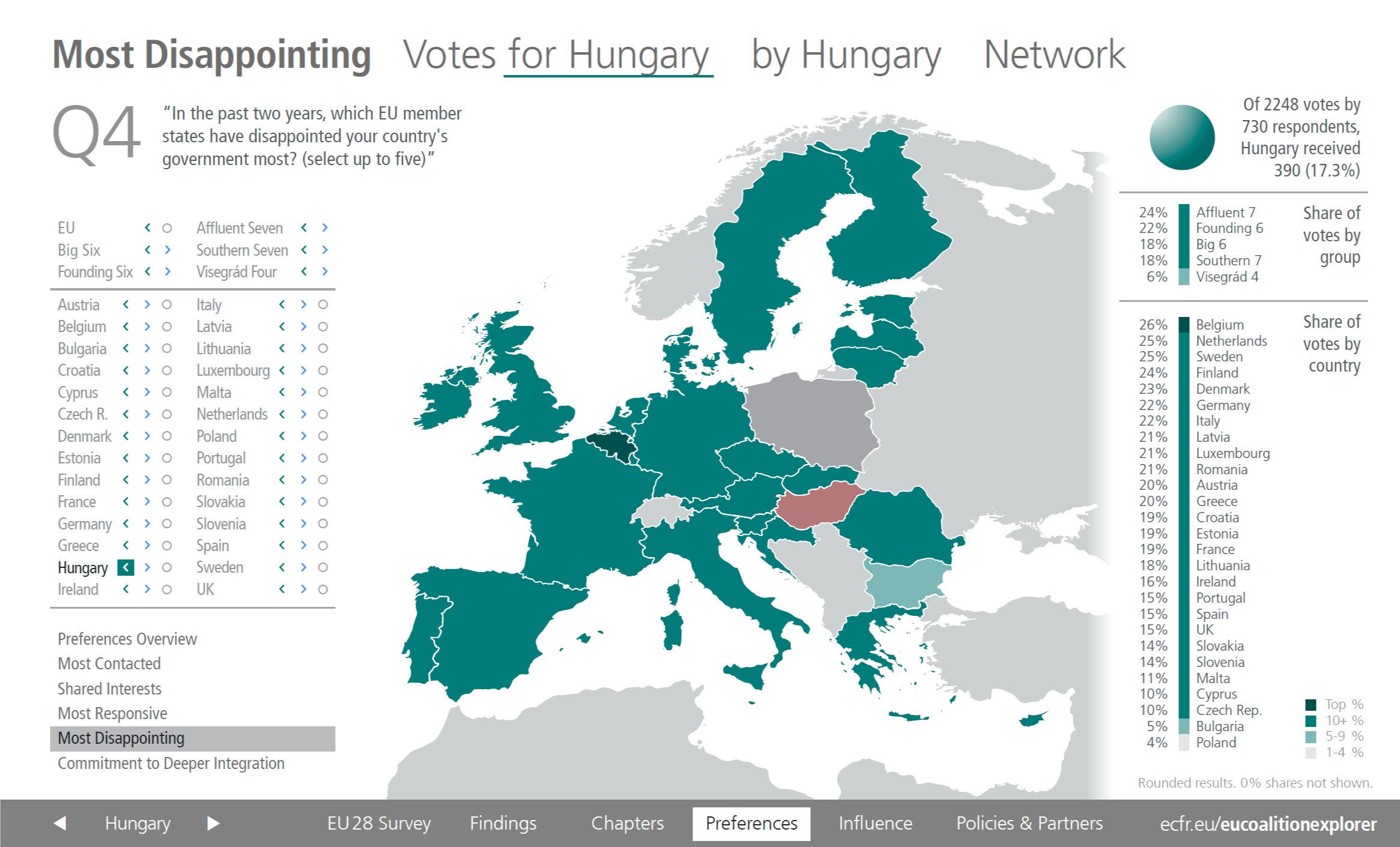 The strategic choices of the Hungarian government have also affected the how able the country is to form coalitions and has essentially resulted in central European isolation at intergovernmental level. Few experts feel that their country shares many interests with Hungary – the only exceptions being the Visegrad Group, neighbouring Croatia and Austria, and the curious case of Bulgaria. The circle of countries that frequently contact Hungary on European issues does not extend beyond these either. However, while the Hungarian government continues to celebrate the bond of the Visegrad Group, national experts point to the increasingly apparent divide between the duo of Hungary and Poland on the one hand and that of the Czech Republic and Slovakia on the other. In terms of contacts, interests, and responsiveness, Budapest’s ties with Warsaw are also significantly stronger than with Prague or Bratislava. 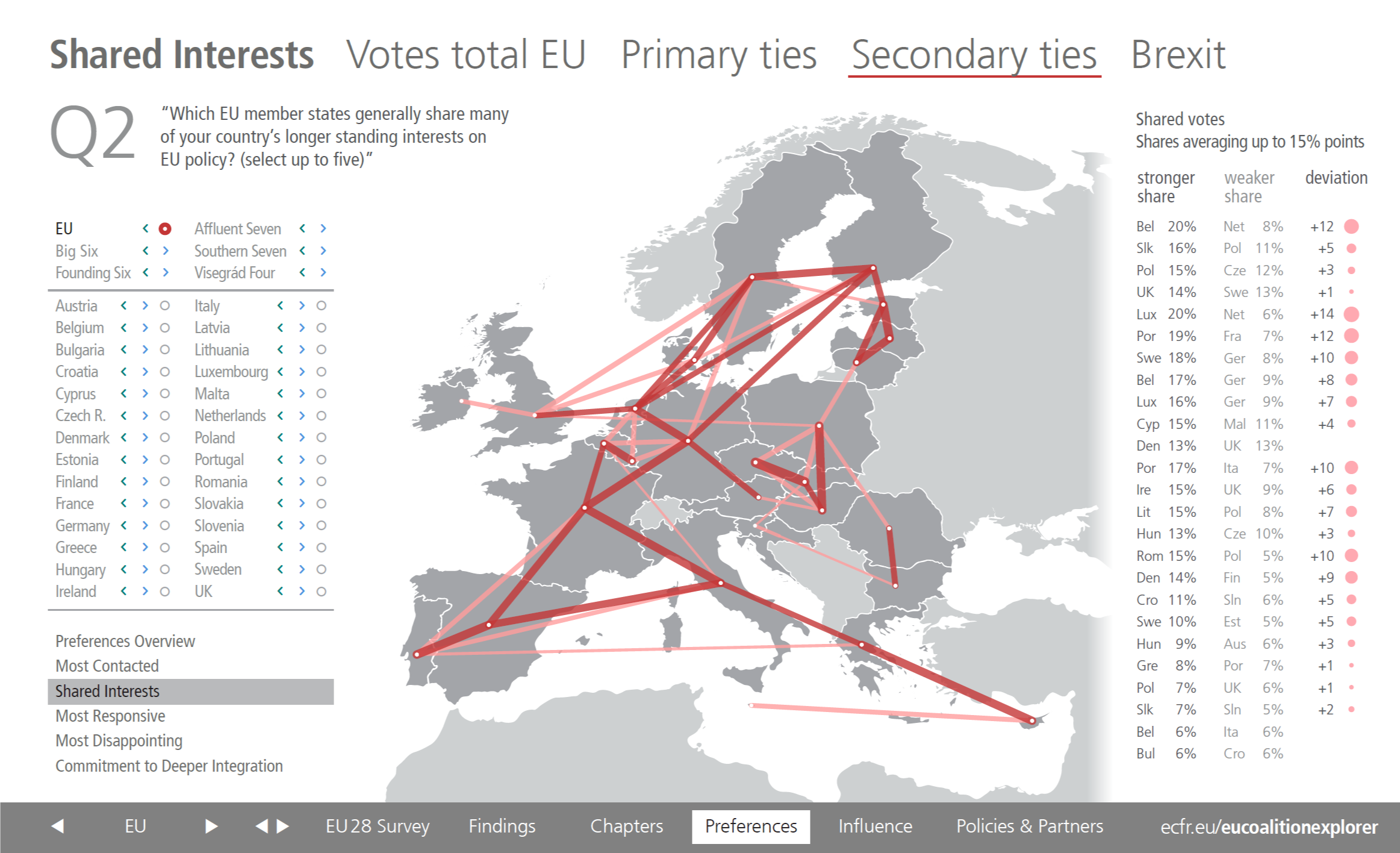 Hungary’s image has sorely deteriorated, but the Orbán government thrives in this situation, and is thus unlikely to change its strategy in 2019. The election to the European Parliament in May and the prospective formation of the new European Commission provide ample occasion for the government to continue in ‘fight mode’. Orbán portrays the poll as a battle between pro- and anti-migration forces, and it will be the European issue he gives most attention to in the first half of this year. The prime minister expects its results to confirm the rise of ‘anti-migration parties’ in the European Parliament and, with that, to alter European politics. By framing the elections to fit into Fidesz’s long-standing narrative, the government is set to continue the mobilisation of its voter base and thus raise the salience of an election that typically attracts limited domestic interest. With the probable rise of populist parties across Europe and the likely exit of the UK, party alliances will inevitably shift after May. Despite the evident division within the EPP over Fidesz, Orbán still enjoys the protection and benefits of belonging to the European Parliament’s biggest political group, and he claims to be committed to it. His meeting with Italian interior minister and Lega leader Matteo Salvini in August 2018, however, indicates that he is keeping his options open.

The future affiliation of Hungary’s governing party may also be influenced by the hearings in the framework of the Article 7 procedure in the Council, and by how governments of various political leanings choose to treat Hungary. As of now, the procedure is still undecided, and it falls to the current Romanian and upcoming Finnish EU presidencies to develop the practice. Although bilateral relations between Budapest and Bucharest are far from cordial, Hungary might still expect some solidarity and the consideration of its interests from the Romanian government, for it is also under much criticism due to its attempts to roll back democratic standards at home. Finland, however, has been in favour of the Article 7 procedure against Hungary, and it also strongly supports the rule of law conditionality proposed by the European Commission in relation to disbursement of EU funds in the future budget. In fact, Finnish respondents to ECFR’s EU28 Survey were among the most disappointed with Hungary. The second half of 2019 may therefore see Helsinki adopt a tougher stance toward Budapest in the Article 7 procedure.

Finally, beyond the elections, the budget negotiations will prevail on Hungary’s EU agenda this year. The initial European Commission proposals would see Hungary lose a significant share of its structural funds and sustain Common Agricultural Policy cuts. But as a net beneficiary, a staunch opponent of the proposed rule of law conditionality, and of the European Public Prosecutor’s Office, Hungary is unlikely to secure a better deal financially. When it comes to structural funds, it can still count on the Friends of Cohesion group, which is dominated by the ‘new member states’. On CAP, however, differences will already show. To secure a more favourable budget outcome, the EU’s “most disappointing member state” would need to prioritise exactly those constructive and compromising attitudes, which it chose to abandon over the past years in favour of confrontation and escalation.

Zsuzsanna Végh is an associate researcher at ECFR and research fellow at the European University Viadrina.