‘Jein’ has always been one of my favourite German words. It is a mix of yes (ja) and no (nein), which may sound meaningless, but is often surprisingly useful. For instance, when talking about German attitudes to their country’s foreign and security policy.

Each year the German Koerber foundation publishes a poll on the German public’s views on foreign policy. This week the 2017 edition was presented to the public. It includes a host of interesting stats: 74% think accession talks with Turkey should be broken off; 56% judge the current relationship with the US as bad or very bad; 37% think Brexit will have no particular impact on the EU.

Of course, one should be wary of overinterpreting polling numbers. Populations have rarely, if ever, coherent views. Most populations want mutually exclusive things – a fact demonstrated most prominently by the UK’s ‘have your cake and eat it’ Brexit tragedy. But two broad trends can be observed.

There is no love lost for Donald Trump in Germany. Germans adored Barak Obama (remember the crowds that welcomed him in Berlin, before he was even elected?) and followed the last US election with incomprehension. According to the Koerber poll, Germans see the relationship with Trump and the US as Germany’s second biggest foreign policy challenge – far ahead a possible conflict with North Korea, and second only to the handling of refugee flows.

More importantly, the poll points to a change in attitude that goes beyond Trump. Whereas last year, the majority of Germans considered the US to be Germany’s most and second most important partner, this spot is now taken by Macron’s France. Indeed, 34% of Germans say Germany should cooperate less with the US; and when asked whether it is more important for Germany to have close relations with the US or Russia, the US wins by a mere 10 percentage points.

Many Germans, who have grown up with stories about the rise of Nazism that caused WWII, are concerned about the white supremacy and Nazi rhetoric that can be heard on the other side of the Atlantic, and are starting to wonder whether this is the country they want to be allied with.

As a result, Germans more than ever turn to Europe, and specifically France. In the Elysee Palace in Paris, the poll must have caused quite a few smiles: France has overtaken the US as Germany’s most and second most important partner, and 90% of Germans want to cooperate more with France, more than with any other country. So, Germans are saying ja. But they are also saying nein: 59% believe the EU is on the wrong track, and 54% reject Macron’s idea of an EU Finance Minister. 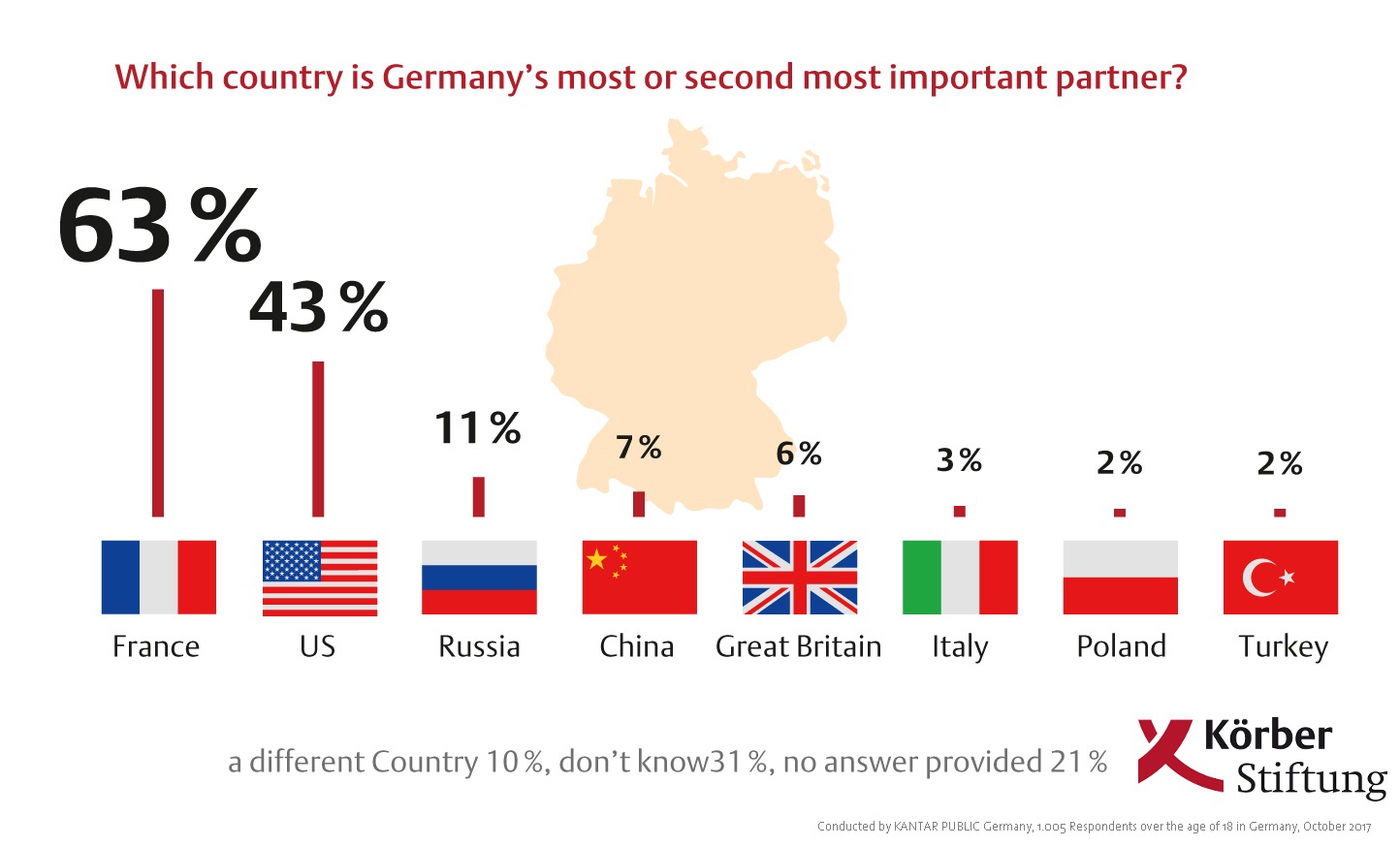 2) Germans care more about security, but don’t understand it

The poll shows that, “ensuring the security of Germany and its allies” is the number 1 area in which Germans consider their international engagement important. The ever-worsening global security situation appears to finally have woken the country from its Kantian peace dream. Germans now overwhelmingly support the idea of a common European Army (though it may be good that the pollsters did not push the respondents on what they thought this meant, since no one knows).

The most striking result of the study is that on Germany’s defence, a whopping 88% think the partnership with the EU should be prioritised, while only 9% think the priority should be the US partnership. On the one hand this is great news for the future of European defence, an area in dire need of improvement. But the extent to which Germans seem to underestimate America’s importance for Germany’s security is worrisome. Asked about the basis of US-German relations, respondents name security and defence ties dead last, after economic and trade ties and shared democratic values. Of course, one tends to emphasise the things one is good at (economy and values), and to underemphasise the things one is bad at (defence). But this result suggests widespread ignorance regarding what – and who – has kept Europe and Germany secure over the last decades. 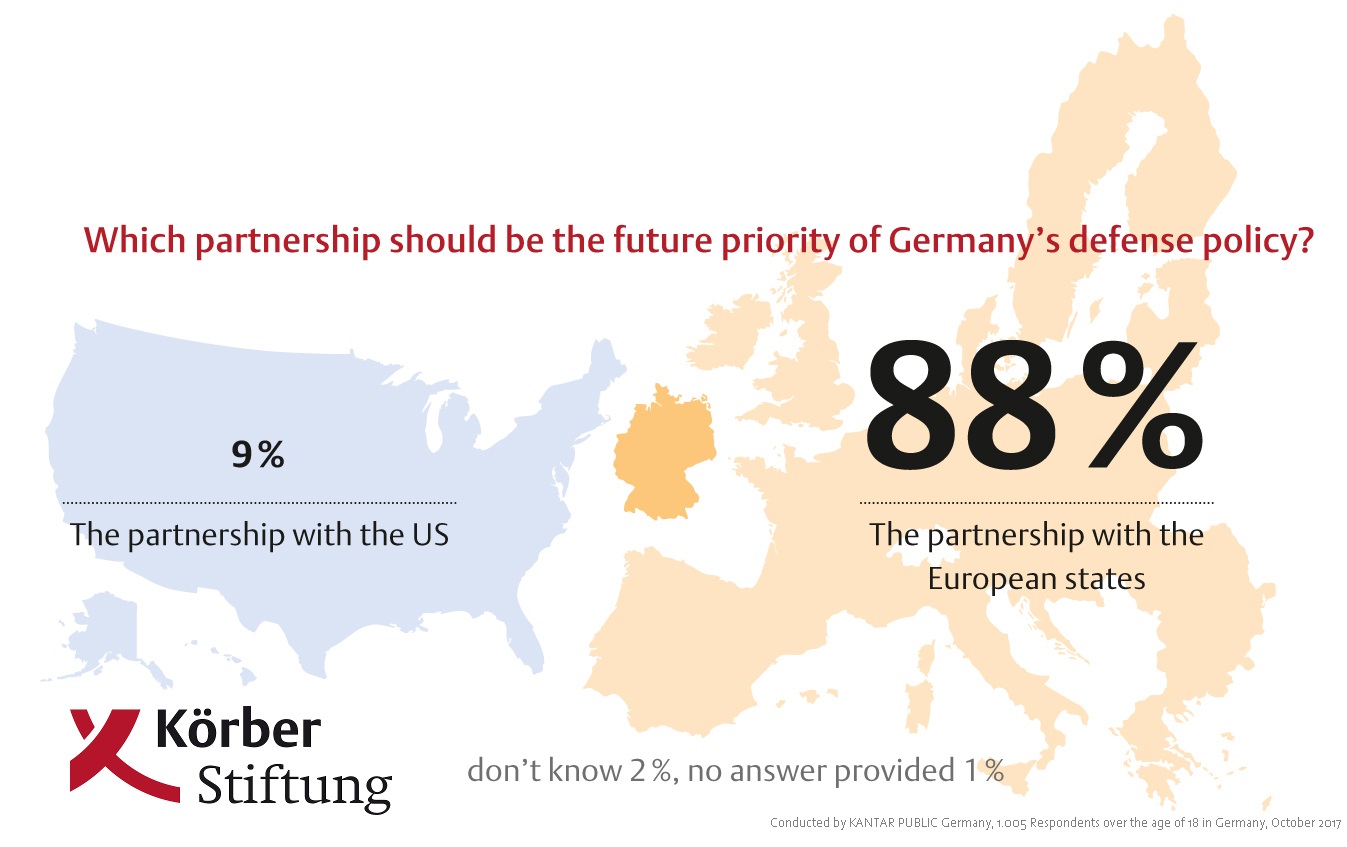 Even more importantly, while Germans are saying ‘ja’ to European defence, they are also saying ‘no’ – to actually paying for it. An absolute majority feels that Germany should maintain its defence spending at the current level, which is 1.2% of Germany’s GDP and thus well below NATO’s 2% goal.

Incidentally, last week, news reports suggested that not a single one of Germany’s six submarines were operational. It is therefore instructive to supplement the Koerber poll with another study that was published this month, the European security report by the Munich Security Conference. Rather than focusing on popular beliefs, they looked at the hard facts of European security. They are not pretty. With regard to key military equipment (armoured vehicles, artillery, tactical aviation etc), Europe has less kit today than it did in 1995 or 2005. European defence spending has continuously decreased over the last decades in proportion to GDP. Until this trend is reversed, Germans should particularly careful not to discard their American ally.

Things are changing in German society, and it will fall to the next government to turn the conflicting views into coherent policy. In its subtitle, the Koerber poll ask the question “Involvement or Restraint?” From reading the report, the German answer is a clear ‘jein’ to both.