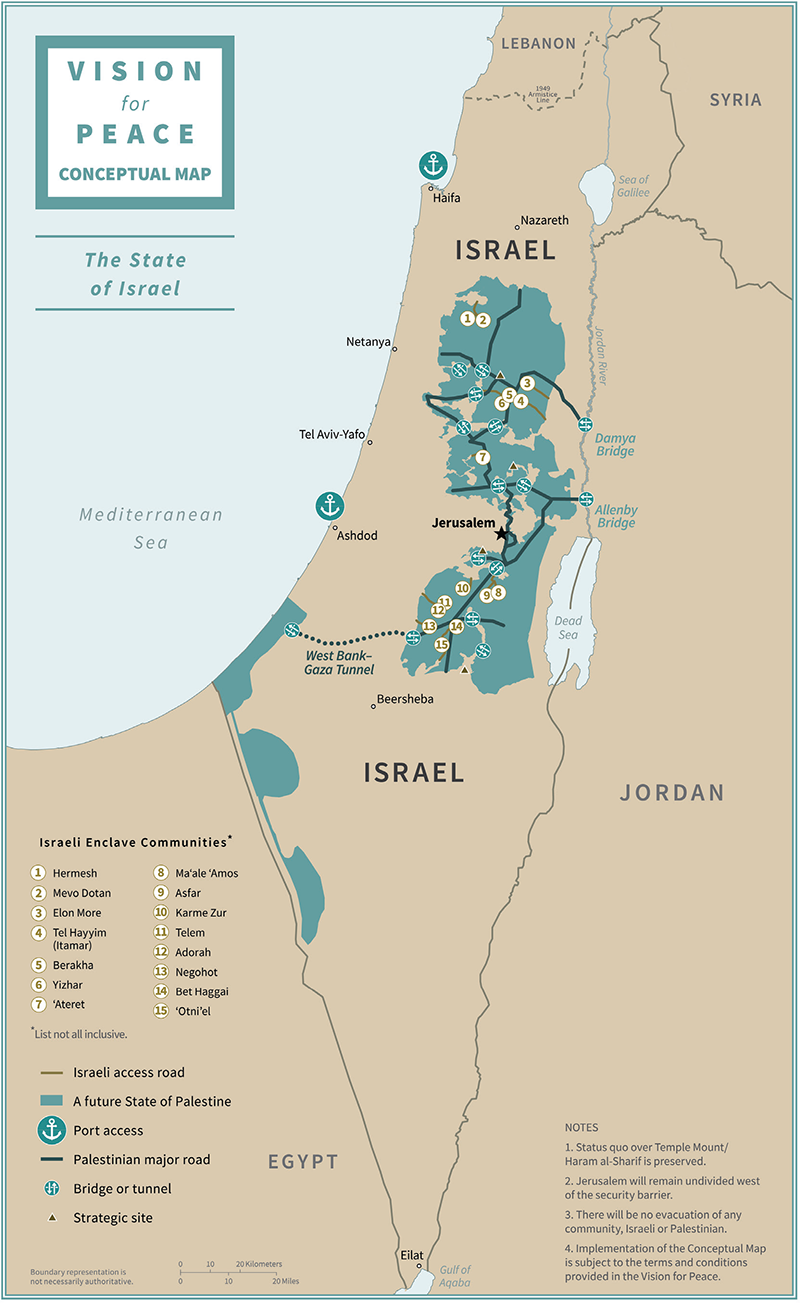 Donald Trump’s “parameters” for a final deal between Israelis and Palestinians focus on the final status issues that have been at the heart of past rounds of negotiations: future borders, the status of Jerusalem, security arrangements, and the fate of Palestinian refugees. In a number of respects, the US plan marks a radical break from past visions for a two-state solution and previous final status parameters. It also marks a new approach: whereas past US efforts have sought merely to delineate the contours for a future agreement, Trump’s team has swung fully behind the most maximalist Israeli demands in order to impose an agreement on the Palestinian side.

During the summer of 2016, a European government tasked the European Council on Foreign Relations with leading a Track II initiative to devise a new set of final status parameters in light of the existing international positions at that time. Its mandate was to develop new parameters that took into account the increasing divergence in Israeli and Palestinian positions, corresponded with established European Union policy positions and international law, and could receive endorsement from the Obama administration. The ECFR initiative was supported by a working group of experts and former officials from Europe, Israel, Palestine, the United States, and neighbouring Arab countries.

The working group’s language and ideas fed into US deliberations around what would become UN Security Resolution 2334 and were reflected in the final status parameters outlined by John Kerry in December 2016. The group chose to expand only marginally on existing positions in order to identify zones of agreement, while leaving final details to be negotiated by the parties.

In contrast, the Trump team has gone into much greater depth – producing a 181-page document – with a view to imposing final terms. In doing so, however, the US has significantly moved the goalposts in Israel’s favour. ECFR working group members had at the time expressed their concern about such an approach, warning that handing free ‘wins’ to the Israeli leadership would encourage it towards yet more right-wing and unilateral tendencies.

The exercise below is an attempt to distil the “Trump parameters” from an otherwise extensive US document that at times can be difficult to digest given its length, structure, and style. This necessarily omits the minutiae of the plan that Palestinians would have to meet in order to be granted US and Israeli statehood recognition, including with regard to negotiation modalities and the extensive conditions.

The US plan deliberately distances itself from international law and existing UN Security Council Resolutions, whose determinations have informed past parameters. It is worth noting that, despite the US assertion that there are conflicting interpretations of the relevant UN resolutions, in particular 242, in reality only Israel opposed the international consensus interpretation. Moreover, it ignores subsequent resolutions, including 2334, which have resolved any suggested ambiguities.

The Trump parameters speak of a realistic two-state solution and the need for equal rights through two states. During ECFR’s drafting process, such language was considered important in order to safeguard the rights of Palestinian citizens in Israel while still taking into account Israeli (and US) demands for recognition of Israel’s Jewish character. But the US proceeds to redefine what such concepts mean in practice. This reframing becomes clear in the subsequent parameters, but is already reflected in the clauses affirming that any Palestinian state will be allowed only self-administration under limited sovereignty, and endorsing the continuation of Israeli security control over Palestinian territory.

The US vision completely does away with the international belief that the pre-June 1967 borders should form the basis of a Palestinian state. It accepts that Israeli settlements and outposts – which have no validity under international law – should be accepted as faits accomplis.

By opposing the evacuation of Israeli settlements, and accepting that even settler outposts – which are illegal under Israeli law – can remain in place under Israeli sovereignty, the US is envisaging territorial transfers to Israel far in excess of anything that had previously been considered by either Israeli or Palestinian negotiators. Israel’s retention of roads connecting Israeli enclaves deep in Palestinian territory, and the matrix of control that comes with it, will assure the continued fragmentation of the Palestinian state.

The description of potential Israeli territory given to a future Palestinian state in exchange is also significant. While ECFR parameters call for equal land swaps, Trump mentions only that these should be reasonably comparable in size. As ECFR’s drafting group warned, a vague reference to the nature of land swaps could be used by Israel as a justification for annexation, expansion, and continued unreasonable demands. Trump’s terminology also allows Israel to give lower-value land in exchange – such as the desert areas near the Egyptian border.

In addition, Israel is allowed to claim Palestinian territorial waters, removing Palestinian access to vital resources in its Exclusive Economic Zone, including fishing rights and the Gaza Marine natural gas.

The Trump parameters introduce further Palestinian concessions not previously envisaged. It gives Israeli courts jurisdiction over disputes relating to private property rights and allows Israel to play a direct role in Palestinian territory adjacent to its security wall. Based on current practice, this could allow Israel to enforce demolition orders against Palestinian structures in this area on the pretext of security.

By indicating that Palestinians living in areas that will fall under Israeli control will become Palestinian citizens, the plan provides Israel with a mechanism to absorb Palestinian territory without having to assume responsibility for its Palestinian inhabitants. In another far-reaching move, it also opens the doors to the territorial transfer of some 300,000 Palestinian citizens of Israel to a future Palestinian state.

The Trump parameters grant all of Israel’s demands relating to Jerusalem. This will come under full Israeli sovereignty, along with Muslim holy sites. By granting the right for Jews to pray on the Haram al-Sharif (Temple Mount) it is breaking with the (pre-2000) status quo – a de facto arrangement between Israel and Jordan (in its capacity as Muslim custodian) which played an important role in preserving relative peace in Jerusalem since 1967. The status quo has been eroding over past years leading to repeated flare-ups of violence. The right of worship is an extremely contentious issue, and removing status quo arrangements in such a unilateral manner will likely provoke further violent clashes between Jewish and Muslim worshippers. By contrast, ECFR’s parameters called for special arrangements to be agreed by the sides, reflecting the established status quo.

The capital offered to Palestinians would not be located in Jerusalem and instead encompass outlying Palestinian areas located to the east of Israel’s security barrier. It does, however, meet an Israeli desire to divest itself of the Palestinian area of Kafr ‘Aqab and the impoverished Shuafat refugee camp, which are currently located in Jerusalem’s Israeli-drawn municipality (but physically separated from the city by Israel’s ‘security barrier’).

As highlighted by ECFR’s parameters, a future agreement should take into account the security needs of Israelis and Palestinians. They allow for a transitional and limited Israeli security presence but are clear that final arrangements must bring an effective end to Israel’s occupation and respect Palestinian sovereignty. During the drafting process, ECFR group members made clear that any language should avoid making Israel the arbiter of Palestinian progress and thereby allow it to maintain its military occupation permanently. Instead it envisages a role for the international community in monitoring the compliance of both sides.

Trump’s parameters take a diametrically opposite position. They frame security interests as an exclusively Israeli requirement that takes precedence over Palestinian sovereignty and rights. This in effect sanctions open-ended Israeli military control over Palestine. It also allows Israel to determine the extent to which Palestinians have complied with the security requirements and reverse the easing of restrictions (similar to Israel’s current practice towards Gaza). The parameters also suggest a possible Jordanian role in supporting security in Palestinian territory. This could be interpreted as an attempt to push Jordan to assume greater responsibility over Palestinians, as a first step towards confederation – an idea often pushed by right-wingers in Israel.