For some Europeans, cohesion within the European Union is largely useful for the access to EU funding it provides. For others, cohesion is valuable for the sense of belonging and social togetherness it creates – as a kind of glue for society. In either case, cohesion is a complex, multilayered phenomenon that is extremely difficult to translate into data. Yet the European Council on Foreign Relations has taken on this challenge, recently publishing the third edition of its EU Cohesion Monitor.

Containing more than 20,000 statistics, the monitor is a data ocean that one must navigate carefully. This involves, firstly, a knowledge of how ECFR’s methodology fits with the overall concept of cohesion and, secondly, an awareness of the questions one wants to answer most.

ECFR’s definition of cohesion has two broad dimensions: individual and structural. Measures of individual cohesion cover data on Europeans’ experiences, engagement and participation, attitudes, expectations, and positions on common policies. In contrast, measures of structural cohesion cover data on states’ resilience, economic ties, funding, policy integration, and security. In both areas, these measures break down into sub-indicators. For example, the engagement and participation indicator covers participation in European Parliament elections and the choice to vote for pro-European parties, while the economic ties indicator covers trade with EU countries (among other things).

To make its findings more digestible, ECFR divides the EU28 into 11 overlapping sub-groups. These include, for instance, the Founding Six (comprising Belgium, France, Germany, Italy, Luxembourg, and the Netherlands) and the Visegrád group (comprising the Czech Republic, Hungary, Poland, and Slovakia). 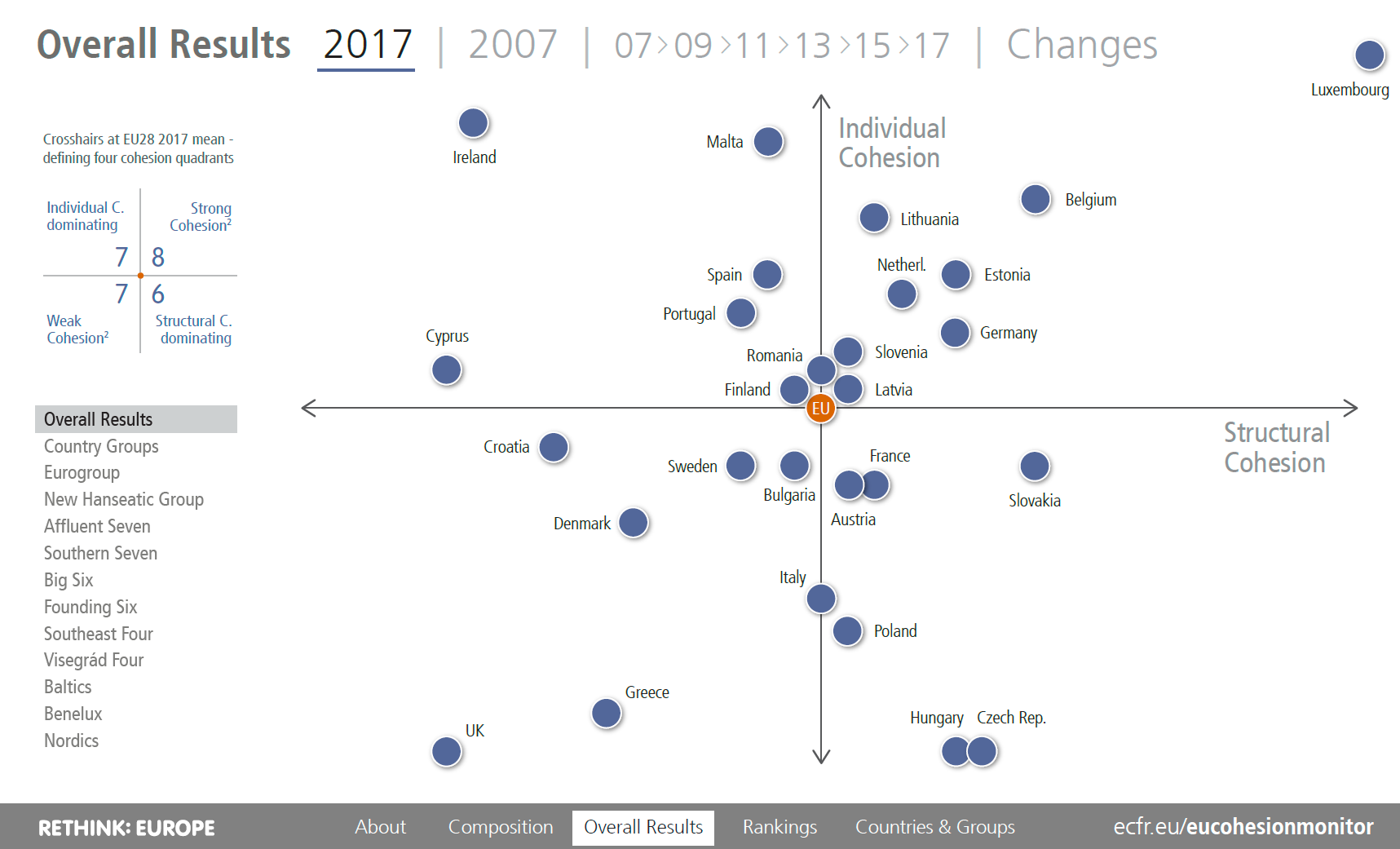 ECFR’s research shows that, by 2017, European cohesion had recovered to the levels it displayed prior to the global financial crisis and the euro crisis. In the long term, structural cohesion has even overcome post-crisis fluctuations to become stronger than it once was. Yet this has been offset by a moderate general decline in individual cohesion – a decline that is more pronounced in countries such as France and Italy, underscoring an overall loss of confidence in the EU and the rising popularity of Eurosceptic parties. This speaks to an important issue: why have Europeans’ sense of belonging and positive perceptions of the EU fallen behind economic and social cohesion? The financial crisis’ effects on the economy – which could be seen in a sharp decline in structural cohesion – are easier to overcome those on Europeans’ perceptions.

Having joined the EU 15 years ago, the members of the Visegrád group provide a reminder that the path to a consolidated – or, as political scientist Wolfgang Merkel would say, “embedded” – democracy is anything but a straight line. Twenty years ago, Slovakia’s prospective EU membership seemed in doubt, while the Czech Republic, Hungary, and Poland rushed towards Brussels. Yet since 1998 – when Slovakia’s authoritarian prime minister, Vladimir Mečiar, suffered electoral defeat – the country has worked hard to catch up. Indeed, Slovakia has even overtaken the other members of the Visegrád group: the latest edition of the EU Cohesion Monitor shows that it has surpassed them in both structural and individual cohesion.

In structural cohesion, Slovakia has a comparative advantage due to its membership of the eurozone and its high degree of economic openness, seen in its extensive exports of cars. However, this advantage could easily create vulnerabilities in, for instance, decreasing consumer demand in export countries or a lack of access to advanced technology in areas such as electric cars. In individual cohesion, Slovakia’s very low turnout in European Parliament elections is offset by Slovakians’ general attitude towards the EU – which is more positive than that of most Europeans. 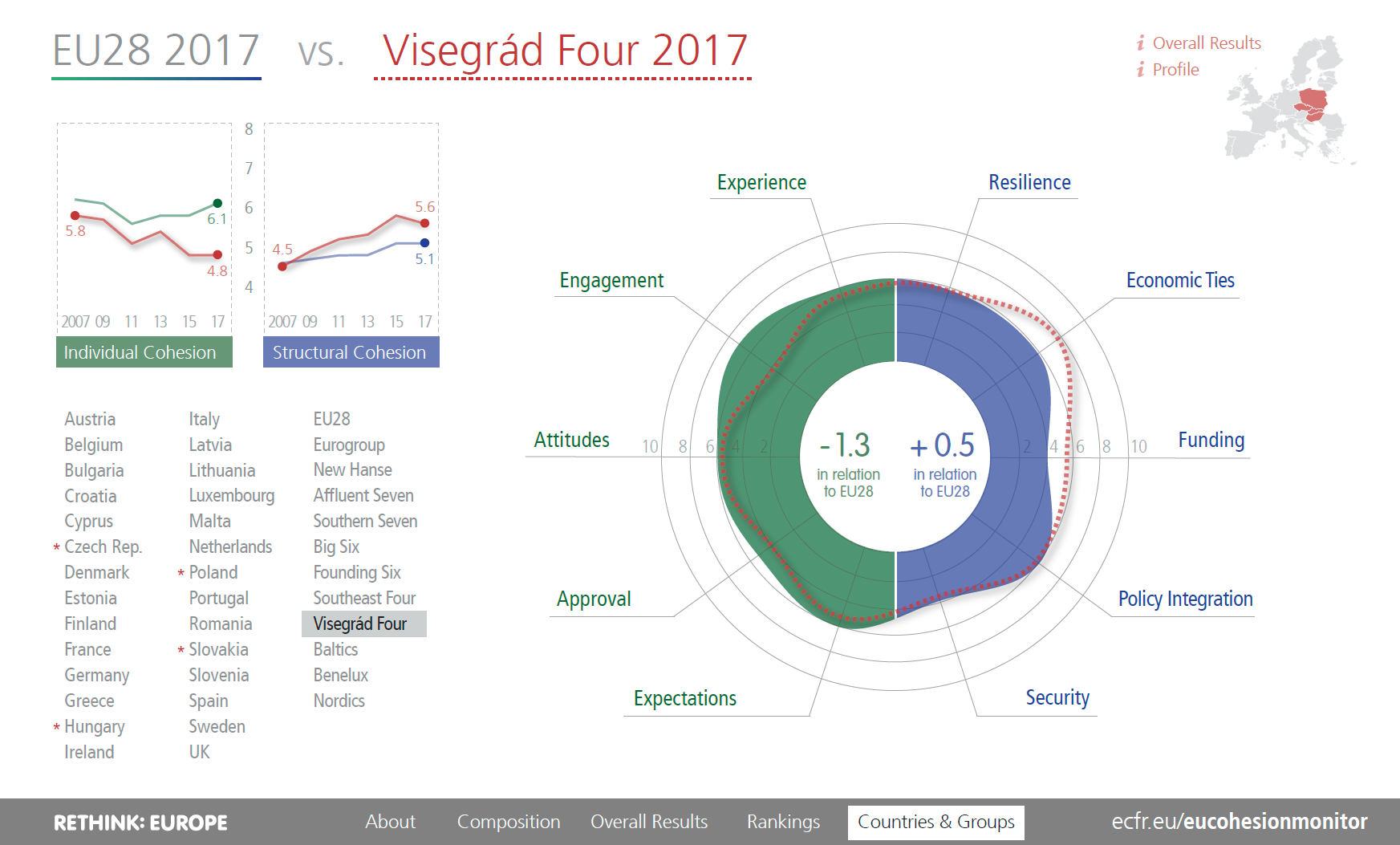 The EU Cohesion Monitor now ranks the Visegrád group as having greater engagement with other European countries than the EU28 average. This is primarily due to the significant progress in structural cohesion its members have made (chart above). Yet they have made relatively little progress in individual cohesion. Therefore, rather than resting on their laurels, the members of the Visegrád group should look to the example of all three Baltic states, which show how countries can use their EU membership even more effectively. Without political corruption, misconduct, and the misuse of EU funds, the Visegrád group could achieve even greater cohesion and prosperity. 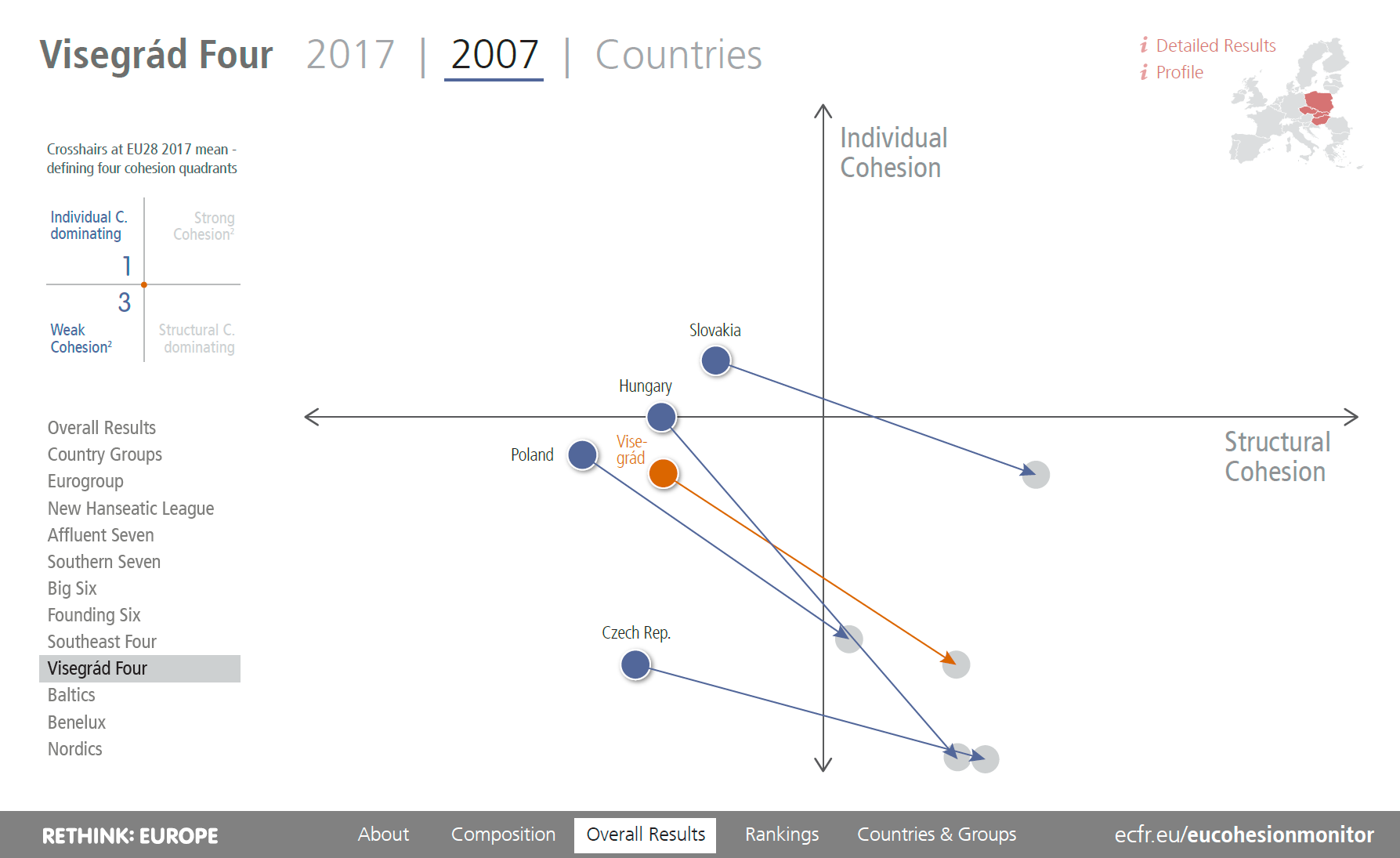 The EU Cohesion Monitor demonstrates that it is not enough for countries to engage in European integration only through policies, business links, the wider economy, and other structural aspects of cohesion: the hearts and minds of European citizens must also favour integration. Where structural cohesion increases but individual cohesion declines, Euroscepticism can still thrive. The members of the Visegrád group require greater individual cohesion, more commitment to the European project. However, they cannot achieve this unless their leaders adopt a more pro-European mindset. If Hungarian Prime Minister Viktor Orbán, Czech President Miloš Zeman, Polish leader Jaroslaw Kaczynski, or Slovakian opposition leaders Boris Kollár and Marian Kotleba continue to see the EU as a threat to national sovereignty, one can hardly expect the hearts and minds of central Europeans to change for the better.

Oľga Gyárfášová is a professor at the Institute of European Studies and International Relations at the Comenius University in Bratislava. She also cooperates with the think-tank Institute for Public Affairs.