Nearly all established parties running for the coming Bundestagswahl on 24 September have adopted a narrative that combines a pro-European outlook with an emphasis on the need for European reforms. Only the Eurosceptic AfD bucks the trend with its calls for a ‘Dexit’ referendum.

Merkel’s CDU sets itself apart: it does not explicitly endorse flexible integration, nor demand institutional reforms to strengthen the European Parliament. Rather, it contends that European integration can be accelerated by kickstarting the Franco-German motor, using the momentum created by the Pulse of Europe movement, and by reviving the long-neglected Weimar Triangle.

The SPD, Die Grünen and particularly the pacifist Die Linke emphasize the civil over the military dimension of CSDP. Whilst the latter reject militarization of the EU altogether, all other pro-European parties advocate the integration of member states’ military forces. For the SPD, FDP and CDU, this includes the creation of a European Defence Union. Schulz (SPD) and Lindner (FDP) are more ambitious than Merkel, pushing for a European army in their manifestos.

Across the political spectrum, attitudes towards NATO are ambivalent. While the SPD, FDP and CDU emphasize the complementarity of European CSDP and NATO, Die Linke favours Germany’s exit from NATO in favour of a collective security system that includes Russia. The AfD conceives of NATO as a pure defence union, but aims to strengthen European influence in the alliance.

The two percent guideline proves to be contentious, too. Those to the left of the political spectrum (Die Linke, Die Grünen, and the SPD) reject military build-up, while the FDP and centre-right CDU want to increase defence expenditure to two percent of GDP by 2024.

The European-minded parties all underline the shared responsibility of all member states for the accommodation of refugees. In their manifestos, however, they display varying degrees of satisfaction with the three pillars of the EU migration system.

Firstly, all but the CDU call for a revision of the Dublin system to improve distribution amongst member states. The  SPD goes furthest, envisioning a carrot-and-stick approach towards member states who refuse to take their share of refugees.

Secondly, SPD, CDU and FDP are united in their aim to strengthen Frontex, the European border and coast guard agency. Here the FDP is clearest about what it should evolve into: a true European border force under the supervision of the European Parliament. On the other end of the political spectrum, Die Linke wants to abolish the agency altogether, and reinstate a coordinated sea rescue under EU auspices.

Thirdly, the EU-Turkey deal may cause friction in any new government coalition: whereas Die Grünen call the deal ‘problematic’ and Die Linke wants to undo it, the CDU aspires to close similar deals with other countries in North Africa. The SPD and FDP do not address the EU-Turkey deal in their manifestos.

The parties propose a wide variety of concrete reforms to regulate financial markets and stabilise the Eurozone after the crisis. While the CDU aims at instrumentalising the Franco-German power couple “Merkron” to create a European Monetary Fund (EMF), Schulz’ reform package is far more ambitious. In addition to an EMF, his SPD proposes an economic government for the Eurozone and a common finance budget, with the desire to deepen the European Monetary Union and develop the Stability and Growth Pact further.

The FDP's financial scheme is as extensive as the SPD's, but it does not equate financial security with European integration. On the contrary, it wants to adapt the treaties to allow countries to leave the Eurozone without leaving the EU, and to phase out the European Stability Mechanism. Die Grünen push for a debt ceiling for banks and stricter merger-controls. Die Linke– determined to break the power of the financial markets – proposes a public European rating agency and a European debt conference to determine the legitimacy and sustainability of national debts.

On the future shape of EU trade policy, the parties seem to be even further apart. Die Linke uncompromisingly rejects free trade agreements such as CETA and TTIP, as does the AfD which prefers multilateral trade agreements and prioritizes the protection of German companies against uncertain legal relationships. The Greens, social- and free democrats conditionally support such free trade agreements. Merkel’s party, in turn, readily commands the fulfilment of CETA and the continuation of TTIP negotiations.

A systemic comparison of the election programmes on EU and foreign policy topics can be found in this table (last updated: 09-08-2017). 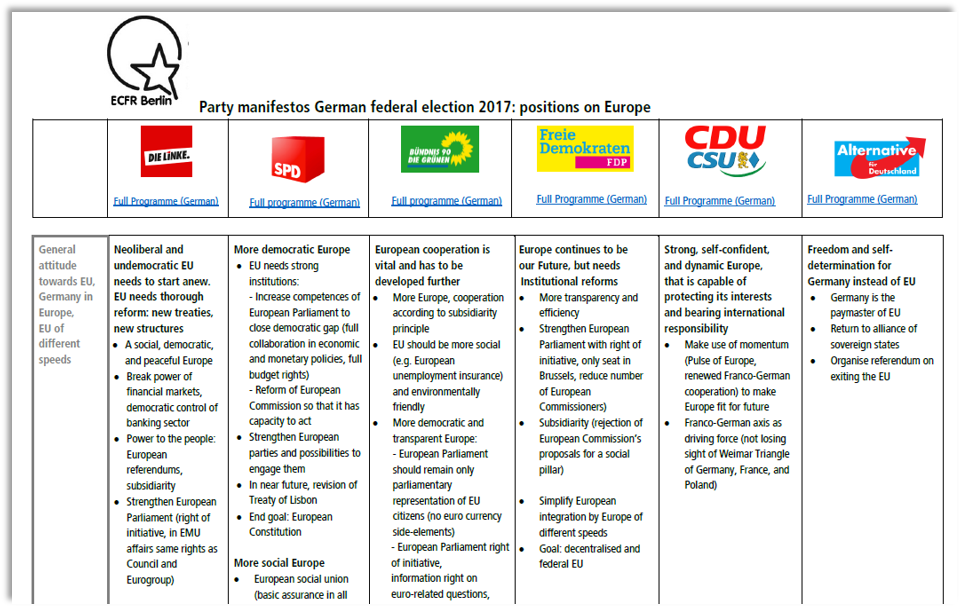