Should you be searching for a strong case of the power of smaller states in the European Union, look no further: the Netherlands is the best example of a country punching above its economic or demographic weight. And this is in spite of its reluctance towards deeper integration. The Netherlands has the sixth largest economy in the EU, ranks seventh in defence spending, and is eighth in population size. But the Dutch come in fourth out of 28 – behind only Germany, France, and Italy – in terms of relevance as measured by ECFR’s EU Coalition Explorer, even though their (and Italy’s) commitment to deeper integration is generally viewed to be the weakest of the founding EU members.

Policymakers and planners in The Hague currently have cause to review their country’s place and role in its interactions with member states. After all, Brexit means that an important ally and like-minded partner on issues ranging from security to trade is leaving the bloc. For Dutch diplomacy, this implies a growing dependence on its closest partner, Germany. Relations with Berlin are already key to Dutch EU policymaking. As the Coalition Explorer shows, the ties between both countries are mutually strong — for Germany, the Netherlands is its most important EU partner after France. Relying on that link alone, however, could be too narrow a base to satisfy the traditional inclination of the Dutch political class to balance its relations with Germany — and, on top of that, to achieve some sort of counterweight to the Franco-German axis. Close relations with Britain have served that purpose well over many years, even though the British opt-outs from the euro and Schengen already weakened London’s weight in the balance. Furthermore, a reliance on Germany alone could devalue the bilateral link in the eyes of Berlin — a close partner with additional options would certainly count more than one without such alternatives.

With Britain out, the Netherlands will want to develop alternative options. If the Franco-German tandem cannot be balanced without Britain, then possibly a closer relationship with France might achieve something in the Dutch interest. Getting one’s own interests recognised in Paris, and being seen as a valuable partner there, could help to secure the Dutch position. An analysis of the interaction preferences of both countries shows the current weakness of this link. When it comes to the density of contact between the two, The Hague’s focus on Paris is strong (weaker only than that on Germany and Belgium), but the French response is weak. However, on shared interest and on responsiveness, the relationship between the Netherlands and France is insignificant — it does not show up in the list of Dutch preferred partners at all. While Paris — and Berlin — view The Hague as among the top five most influential EU member states in general, at 7 percent respective readings for both countries are slightly lower than that of all capitals taken together (9 percent). They are also significantly lower than the self-assessment of the Dutch professional class, which sees their country at 15 percent.

On the upside of this, the French view the Netherlands as the most influential among the highly affluent smaller member states of the EU: the Benelux countries, the Nordic countries, and Austria. Thus, in the lead of a closer cooperation between these countries, and possibly adding others such as Ireland, Portugal, the Baltics, or Slovenia, the Dutch role could grow in both the eyes of Paris and Berlin. It remains an open question whether this will be achieved by initiatives such as the “Hanseatic League” on eurozone issues. The Hague has potential to expand on a northern agenda and constellation, but this might constrain its role to that of a veto actor. The goal of securing the partnership with Germany and winning standing with Paris might be reversed.

The Hague has potential to expand on a northern agenda and constellation, but this might constrain its role to that of a veto actor.

The message of closer interaction between the smaller but capable members would have to be a constructive one — an ambition to be part of the solution and not of the problem, just like France and Germany like to see their roles in the EU. Such a group, committed to using and shaping the EU as a means to address common interests and challenges, could be valuable to the Franco-German tandem. After all, in the current EU, France and Germany cannot count on a stable support coalition. To be in the lead of this closer cooperation, Dutch diplomacy cannot rely on getting good marks on the policy influence rating in the EU Coalition Explorer alone. ECFR’s analysis reveals some weak spots for the Netherlands in its relations to other countries. Looking at interaction preferences, for example, Austria places the Netherlands in second place though with considerable distance from Germany on all three dimensions measured by ECFR. Austria, meanwhile, does not show up at all on the Dutch interaction radar. The same pattern obtains for Ireland: the strong Irish interest in dealing with the Netherlands is met with indifference. The asymmetry in interaction with Luxembourg is deep; the impact of the Grand Duchy on the Dutch radar is minimal. The Netherlands’ focus on Denmark is moderately strong, but in turn much weaker than the Danish interest in interacting with The Netherlands. The gap also signifies unused potential, because Denmark lacks a really strong mutual relationship with any other member state while being affected by Britain’s exit from the EU as much as the Netherlands. All of these weak spots need to be addressed if the Dutch want to secure and enhance their privileged role among the wealthy smaller EU members. 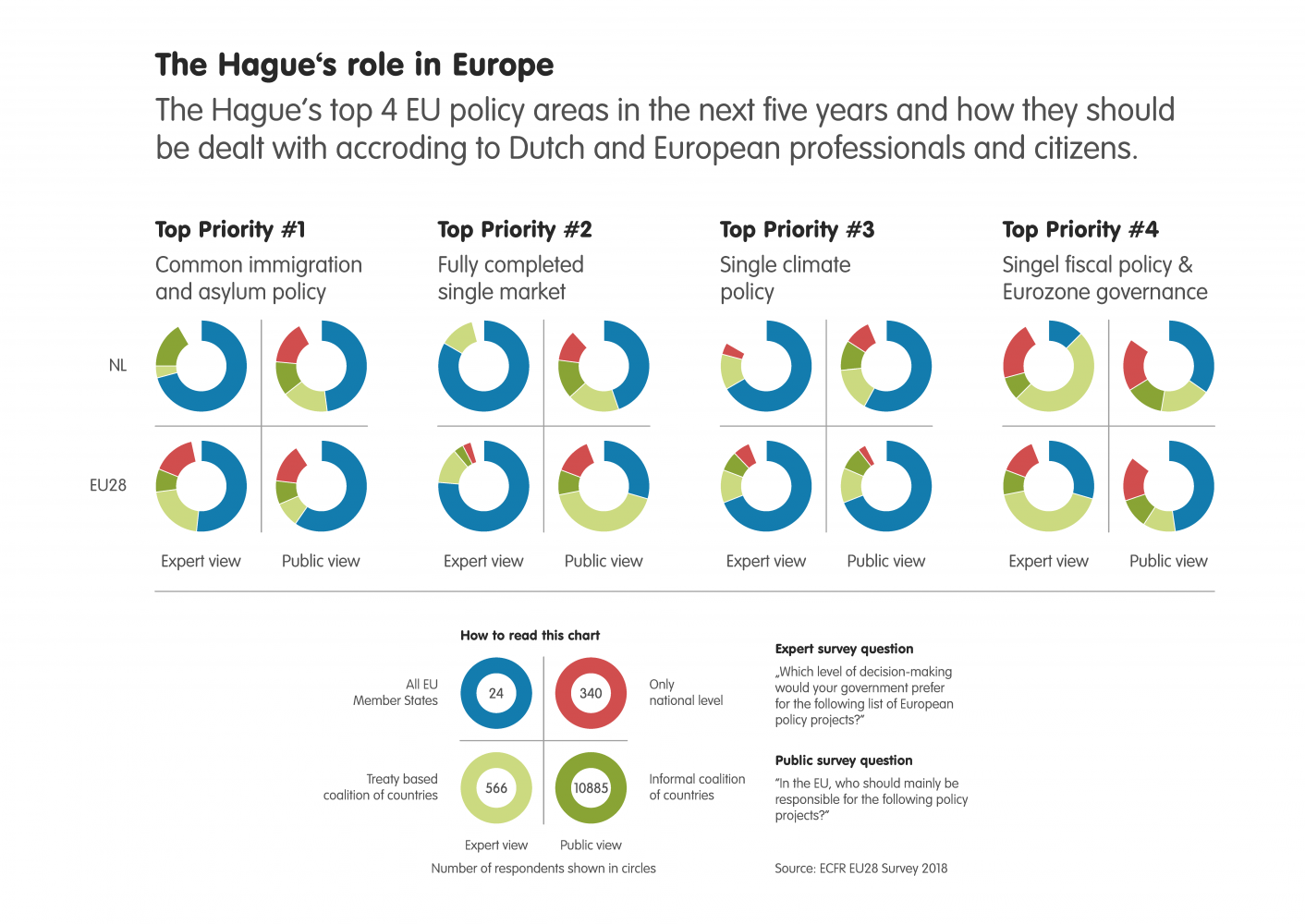 The Netherlands may also need to reach beyond its own neighbourhood or friends. Here, the Dutch outreach currently primarily focuses on the north. Austria, Slovenia, and Portugal show interest in the country but do not enjoy a mutual response. Other countries in the south and east of the EU have no mutual link with the Netherlands. It is telling that seven of the eastern and south-eastern EU members do not list the Netherlands as the most influential among the affluent smaller countries. Deepening relations with Portugal, the Czech Republic, Slovakia, and the Baltic states would be first step for the Dutch to broaden their outreach, going beyond their comfort zone, but still being less difficult to approach successfully than for other countries. The map of countries showing disappointment with the Netherlands reveals where the major hurdles are found in eastern and south-eastern Europe. 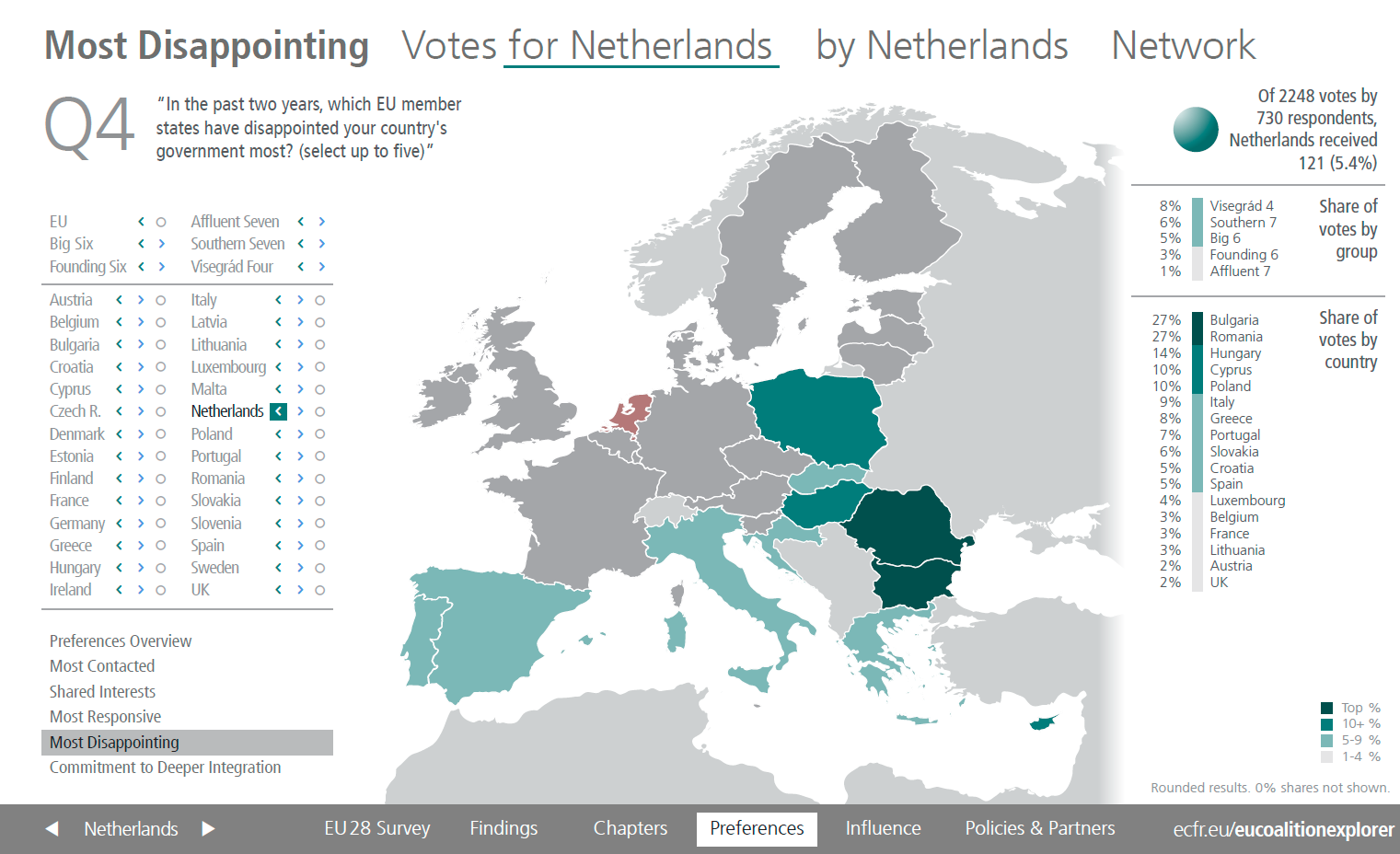 On the other hand, Dutch EU policy does not lack confidence in its impact. Among respondents to the ECFR survey, 9 percent of the votes on overall influence went to the Netherlands, which is the third highest vote after Germany and France with 21 and 19 percent respectively, ahead of Britain at 8 percent and Italy at 7 percent. The Dutch respondents, however, put their own country at 15 percent — nowhere in the EU is the view of the country’s overall influence more positive than in the Netherlands itself. To be fair, the Dutch are not the only ones to overstate their influence; actually, misreading this is rather widespread among capitals, as shown elsewhere. Countries with an even higher overstatement of their influence compared to the general view are Italy, Spain, Ireland, and Sweden.

One reason for Dutch overconfidence could be the complementarity of their own agenda with that of many other countries. The most important issues for the next years from a Dutch perspective are: immigration and asylum policy; completion of the single market; climate policy; single fiscal policy; and common digital policy. But only one, climate policy, is much more a Dutch issue than it is shared with many other member states. On the other issues, the Netherlands finds many partners sharing their preferences and is named fairly often as a preferred partner by them. Some linkages are particularly worth pursuing in light of the outreach options discussed above. Thus, the single market issue could be a strong bridge towards deepening contacts with the EU’s east, whereas climate policy is not just a priority in Denmark or Sweden but also in Portugal.

Domestic public opinion represents a key constraint on the leadership ambitions in Dutch EU policy. Though ECFR’s EU Cohesion Monitor shows a weak rise in attitudes towards the EU and growing approval of EU policy outcomes, a comparison between preferences of policy professionals and the general public generally show less support for EU among the latter. The sample for the Dutch public is not fully representative and should be taken as an indication, but the message is fairly clear: in contrast to the professional view, the public is less supportive of addressing new challenges in the circle of all member states, except on eurozone governance, a common social policy, or common defence structures — here support for EU-wide initiatives is clearly larger than among the professionals, who tend to favour moving ahead in smaller circles.

Ultimately, a visibly engaged Dutch policy seeking to build coalitions and shape decisions in the EU will have to deliver on the expectations of the people. Influence and reputation form part of the delivery, though they could hardly compensate for a lack of more tangible outcomes. However, if the alternative was not to move ahead on key issues for the Netherlands because of a lack of agreement, then leadership in coalition-building could become an essential resource of domestic political support.

Dual intentions: Why the Belarusian regime and its people are not one and the same