Over the course of the coronavirus crisis, China has made headlines not only due to the health emergency that emanated from Wuhan and put the world in lockdown for months, but also because the country’s overall response has increasingly challenged long-held assumptions about its international role.

Europeans had for many years believed that, in the end, China would have an interest in a functioning global economic order because it benefited most from the current form of rules-based, globalised trade. The events of recent months have demonstrated that Beijing does not have an appetite for investing in the global economy. Rather, it aims to focus on domestic growth and efforts to limit China’s dependence on global supply chains.

Most Europeans were convinced that China would support multilateralism, because the Chinese leadership placed a heavy emphasis on multilateral solutions and invested significantly in its presence in international organisations. As the controversial interaction between China and the World Health Organisation over the course of the pandemic has demonstrated, the Chinese Communist Party can pressure international institutions in ways that help it wield influence globally.

Perceptions of China have worsened to a significant degree during the crisis in eight of the nine countries covered by ECFR’s recent Unlock survey.

And, finally, Europeans were convinced for a long time that China had no interest in destroying the European Union, as it was a key trading partner for Beijing and potentially an additional great power to the United States in a more multipolar world order. China’s attempts to divide Europeans during the crisis, along with its fierce and openly hostile rhetoric targeting the capacity of Western democracy to effectively respond to the health emergency, have served as a wake-up call.

But has this led to a real change in how most Europeans see China? The European Council on Foreign Relations has collected vast amounts of data from public opinion polls, expert surveys, and mapping exercises in the last few weeks. Zooming out and looking at the various data sets together leads to one clear assessment: China-EU relations are entering a new stage – across Europe. 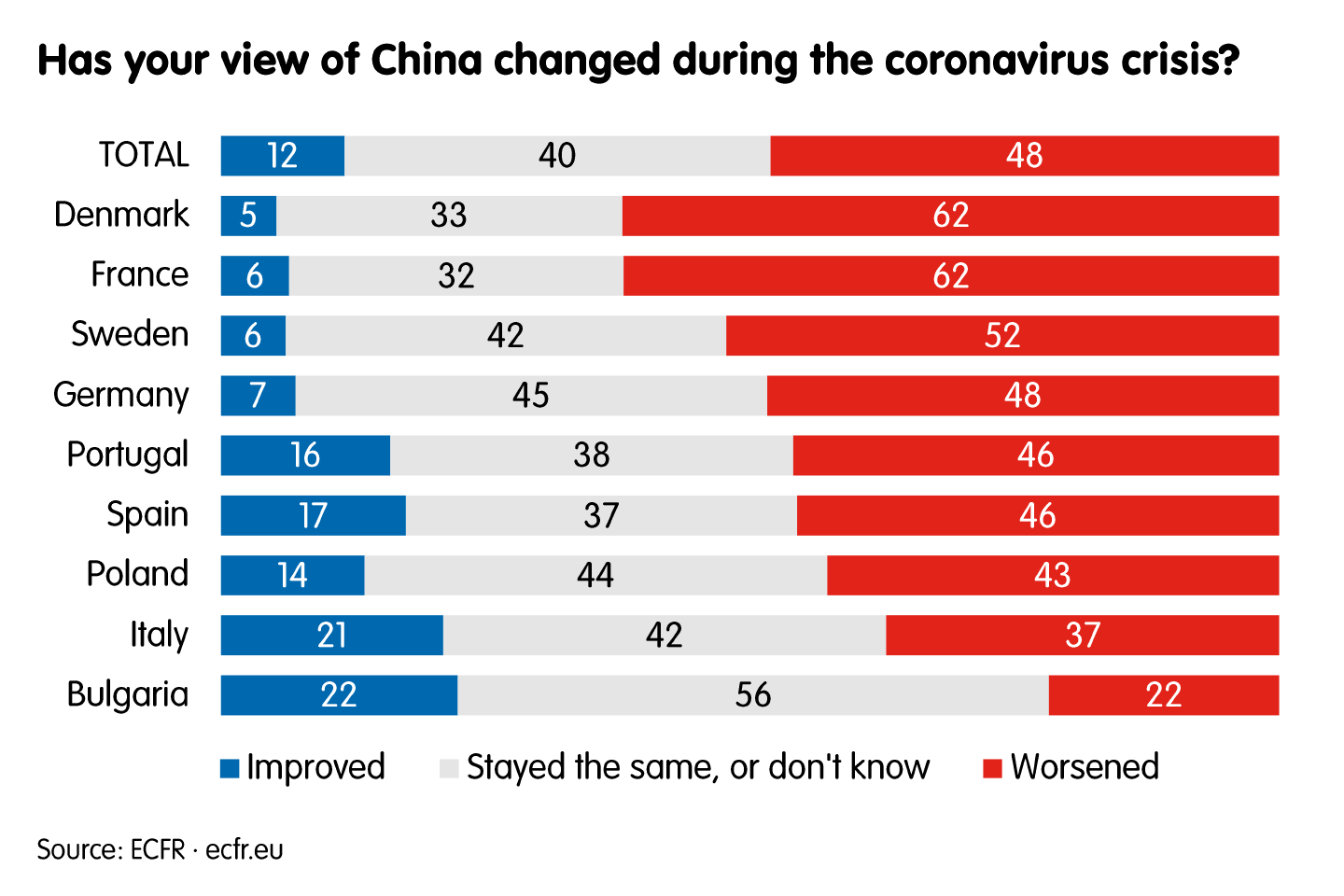 Perceptions of China have worsened to a significant degree during the crisis in eight of the nine countries covered by ECFR’s recent Unlock survey. In France and Denmark, for example, 62 per cent of respondents now have a more negative view of Beijing. And even in Italy – which received a lot of attention and widely publicised support from Beijing during the height of the health emergency – almost 80 per cent of people do not view China in a more positive way.

The fact that, despite Beijing’s propaganda efforts, Chinese donations of medical assistance to Europe have yielded few results is also demonstrated by the EU Coalition Explorer. This study shows that there is a high degree of convergence between and within member states on the need for a pragmatic turn in their dealings with China. The ECFR European Solidarity Tracker now also includes a specific data set on Chinese donations to EU member states, to increase transparency about China’s interactions with Europe throughout this period and counter the narrative that Beijing selflessly rushed to the aid of the EU in its time of need. Quite the contrary: the tactics Beijing employed and its lack of transparency in providing aid – which was often hard to distinguish from normal purchases of medical kit from China, the largest producer of masks and other protective equipment worldwide – indicates that Chinese mask diplomacy has failed and even backfired.

The EU Coalition Explorer clearly shows how divisive the issue is in Italy’s domestic politics and between its political parties. The coronavirus effect is also highly visible in the recent surge in Europeans’ conversations about dependence on China in areas beyond medical equipment. The 5G debate is seeing another big wave of controversy, and a rethink is under way everywhere from Denmark to Italy. Each of these data points has a bigger story behind it – one that remains to be told – but gives an indication of where the debate is moving. For Beijing, it should serve as a clear warning. This summer could turn out to be quite chilly for China in Europe.