As EU member states work to finalise integrated national energy and climate plans for 2021-2030, they are contributing to European climate policy and the governance of the energy union in a wide variety of ways. As ECFR’s EU Coalition Explorer 2018 shows, their efforts have given rise to a range of climate policy partnerships. Member states will soon introduce comparable plans with the help of the European Commission, which will ensure that each contributes to the achievement of the union’s goals for 2030.

The process involves coordinated planning, reporting, and monitoring, as well as a mechanism through which member states can update their programmes in 2023. In other words, there is a lot of room for adjustment, allowing countries to adopt more ambitious goals and to increase their coordination with others to maximise the effect of the undertaking. In this context, the Coalition Explorer provides a detailed overview of both connections between countries and the groupings that may advocate for – or veto – climate and energy initiatives.

Despite their long-term significance, these policy areas are not major priorities for European countries – for which issues such as immigration and asylum take precedence. Overall, member states rank the importance of a common energy policy and a single climate policy in sixth place and tenth place (out of 18 policies) respectively. However, in this, there are considerable differences between various groups of countries. While the Big Six (comprising France, Germany, Italy, Spain, Poland, and the United Kingdom) and the Southern Seven (comprising Cyprus, France, Greece, Italy, Malta, Portugal, and Spain) are very close to mainstream EU positions, there is far less common ground between the Visegrád group (comprising Poland, Hungary, Slovakia, and the Czech Republic) and both the Affluent Seven (comprising Austria, Denmark, Finland, Sweden, Belgium, Luxembourg, and The Netherlands) and the Founding Six (comprising Belgium, France, Germany, Italy, Luxembourg, and the Netherlands). The Visegrád group ascribes a relatively high value to energy policy (ranking it in second place) and a comparatively low one to climate policy (ranking it in 11th place). In contrast, the Affluent Seven and the Founding Six rank climate policy in fifth place and seventh place respectively, and energy policy in ninth place and tenth place respectively. 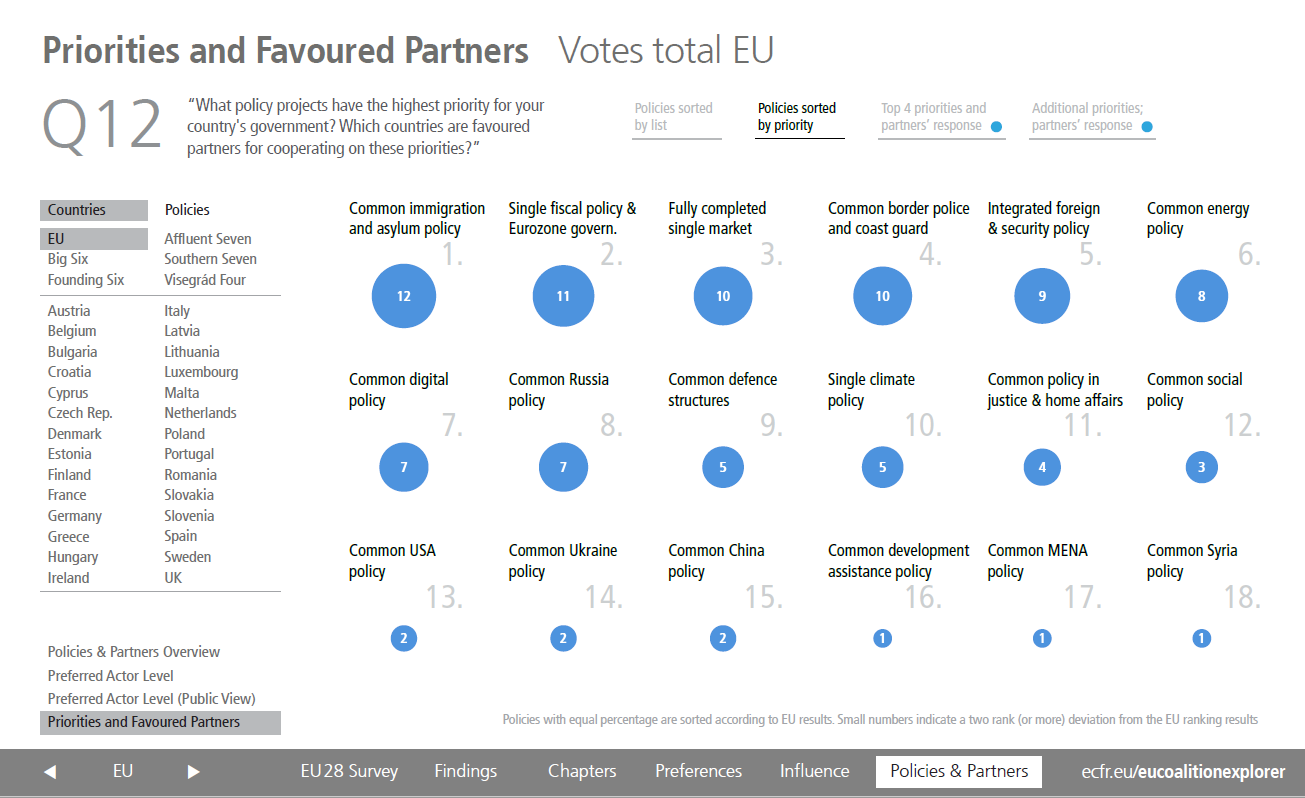 Another way to gauge and predict the formation of coalitions is to examine individual EU member states’ priorities. Although the EU, sensibly, bundles energy issues with climate ones, these policy areas have led to the creation of distinct coalitions. The ten EU countries most committed to a single climate policy are – in descending order – the Netherlands, the UK, Sweden, Denmark, Portugal, Belgium, France, Luxemburg, Finland, and Ireland. Meanwhile, those most committed to a common energy policy are Lithuania, Poland, Slovakia, Bulgaria, Cyprus, Latvia, Croatia, Denmark, Spain, Ireland, and Romania (these last two share tenth place). Interestingly, Denmark and Ireland are the only member states in both groups. Moreover, central and eastern European countries dominate the energy group, while northern and western European nations make up the bulk of the climate group.

Yet neither Germany nor France ranks energy policy or climate policy as a top priority. Given France’s efforts to lead the Paris Agreement on climate change, it is surprising that the country ranks climate policy and energy policy in seventh place and eighth place respectively. Despite the domestic popularity of its Green party, Germany ranks these policies in tenth place and 12th place respectively.

To be sure, Germany’s and France’s huge bureaucratic capacity and political influence make their support valuable. But expectations that they will lead the way on each and every policy could prove to be a distraction. Smaller countries may stand a better chance of building effective coalitions on climate policy and energy policy because they prioritise these areas more. For instance, the Netherlands ranks climate policy in third place, favouring France, Germany, Sweden, and Denmark as partners in the area. Poland ranks energy policy in second place, preferring to work with Lithuania, Germany, the Czech Republic, and Slovakia on energy issues. The presence of Germany and absence of Hungary from this list are important: Poland is often at odds with Germany but still seeks its cooperation, while Hungary’s involvement would be essential to a unified Visegrád group position on energy policy.

ECFR’s data indicates several important trends. Few member states see the UK as an important partner on energy policy and climate policy – likely due to the country’s vote to leave the EU. And there are clear regional patterns in climate and policy issues, as is especially clear in countries’ general preference for working with their neighbours in these areas. There seems to be a northwestern group of member states that could form the core of a climate policy coalition, as well as a central European and Baltic group that could create an energy alliance.

Generally, northern and western states prioritise climate policy, while the central European countries that have joined the EU since 2004 tend to see energy policy as more important. These differences will be manageable so long as member states can find common ground on the areas. As the Coalition Explorer shows, there is a clear mandate for both climate and energy policymaking at the EU level. This suggests that member states should move out of their comfort zones through the expansion of policy coalitions beyond their regions, using their plans for 2021-2030 as a mechanism for coordination and cooperation that strengthens European unity.