More than a year after the British referendum on European Union membership the full implications of Brexit for the United Kingdom and the EU remain unclear. Even expert observers struggle to predict the next turn in Britain’s European divorce, let alone the long-term consequences for European cohesion and cooperation. For many, the unfolding Brexit drama confirms Britain’s role as a European pariah. After all, the United Kingdom has always been somewhat detached from its partners “on the continent”.

However, a close look at data from ECFR’s EU28 Surveys conducted among European decision-makers and policy professionals reveals a different story. Based on polling from 2015 and 2016 among several hundred expert respondents the UK ranks as one of the best-integrated EU member states when it comes to the invisible web of cooperation relationships that connects European capitals. When, in the summer of 2016, we asked more than 340 expert respondents from across the EU, the UK ranked as the third most contacted and the fourth most responsive EU member state (compared to 2015: 3rd and 7th respectively). The UK is in second place among the EU28 when we asked respondents which other EU member states generally share many of their own country’s interests on EU policies (2015: 7th). If these three indicators are taken together the UK and France share the second place in a ranking of all 28 EU member states. This is not only remarkable for an outlier but is also unlikely to have changed fundamentally since the Brexit vote, especially as the networks of personal and professional ties Britain enjoys and has built with its EU partners over years have not disappeared overnight.

The same holds true for our ranking of influence in the EU among the six biggest EU member states, the Big Six (Germany, France, the UK, Italy, Spain, and Poland). The UK is perceived as the third most influential member of that group when it comes to overall influence on EU policy. The UK also comes third when we asked more specifically for influence on fiscal policy. But it is in foreign, security, and defence policy where Britain – in both relative and absolute terms – is credited with having the most influence. While it ranks third again, the expert vote is almost evenly split between Germany, France, and the UK (Figure 1). Again, the overall scores are almost identical to the 2015 data. 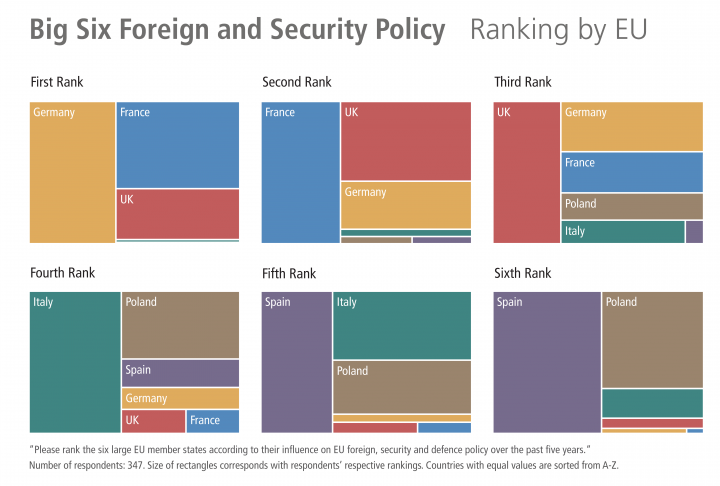 In short, in the eyes of hundreds of policy professionals from across Europe, the UK counts as well connected within the EU and holding significant coalition-building potential among its member states if it were to stay in the union.

This is further illustrated by looking at where the votes for the UK in our 2016 survey came from. Figure 2 below, taken from the EU Coalition Explorer’s chapter on preferences, shows this information in a breakdown of country groups and individual EU member states.

Figure 2: Indicators of connectivity: votes for the UK, from left to right 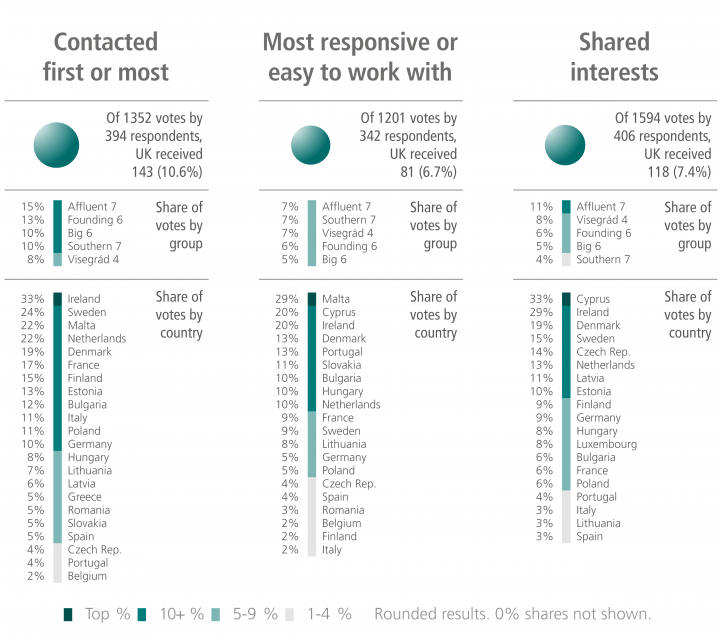 The UK receives votes from many different corners of the EU. In absolute terms the majority of votes in the survey come from the Big Six on the one hand, especially when looking at sheer contact frequency (“contacted first or most”), and Britain’s smaller northern and western European neighbours on the other.

One of these two patterns changes when looking at the indicators for responsiveness and shared interests: votes for the UK from the Big Six start to fall. Interestingly, across these three indicators, British experts in our survey named Germany as their first port of call among the Big Six. This reflex, however, is not shared by German professionals, who tend to be more orientated towards France. Contrary, experts from the Netherlands, Sweden, and Denmark are consistent in their orientation towards the UK across the three indicators. The relationships are also reciprocal: British respondents frequently name these three countries in their answers to the same questions.

Other data from the EU Coalition Explorer shows that the UK is also one of countries with the highest preference to work in coalitions of member states, such as formal agreements outside of the existing treaties or more informal forms of cooperation. But Britain has decided to leave rather than to shape the EU. How it will maintain its high levels of connectedness and influence on EU affairs in the coming months and years is one of the key questions for decision-makers in Whitehall to answer.

The results of our study suggest that Britain should keep Denmark, Sweden, and the Netherlands particularly close – especially after any Brexit deal has been negotiated. The catch for London is that Britain’s traditional allies have started to look elsewhere and also maintain strong ties with each other and particularly with Germany. Our data form the EU28 survey shows that above all this is the case for the Netherlands and Sweden. Following the UK through the exit door is not an option for them nor any other EU member states.

While the terms of the EU-UK divorce are decided in Brussels and London, a process of reflection and intensified outreach is under way in The Hague, Stockholm, Copenhagen, and other capitals of the EU. Add the reshuffling of several of Europe’s central cooperation relationships to the growing list of Brexit implications.

For more details on the EU28 Surveys, additional findings and commentaries, as well as access to all our data and the EU Coalition Explorer please visit www.ecfr.eu/eucoalitionexplorer.