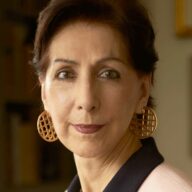 Roxane Farmanfarmaian is director of international relations and global studies at the Institute of Continuing Education at the University of Cambridge, senior research fellow at King’s College London, affiliated lecturer on the modern Middle East at the department of politics and international studies at the University of Cambridge, and senior associate fellow at the European Leadership Network.

Farmanfarmaian is a frequent speaker and media commentator on Middle East current affairs, particularly in relation to Iran and the Gulf. As a regional expert and consultant, she has worked with a variety of governmental and commercial organisations, including the UK House of Lords and the US Department of Defense. Previously a journalist, she has published books including Blood and Oil: A Prince’s Memoir of Iran, from the Shah to the Ayatollah and Media and Politics in the Southern Mediterranean: Communicating Power in Transition After 2011. She holds a PhD and MPhil from the University of Cambridge and a BA from Princeton University. She lives in London.