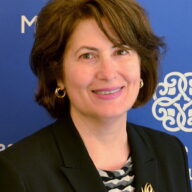 Randa Slim is senior fellow and director of the conflict resolution and track II dialogues program at the Middle East Institute, and non-resident fellow at the SAIS Foreign Policy Institute.

Slim is a former vice president of the International Institute for Sustained Dialogue. Slim was a senior programme adviser at the Rockefeller Brothers Fund, a guest scholar at the United States Institute of Peace, a programme director at Resolve, and a programme officer at the Kettering Foundation. A long-term practitioner of track II dialogues and peacebuilding processes in the Middle East and Central Asia, she is the author of several studies, book chapters, and articles on conflict management, post-conflict peacebuilding, and Middle East politics.