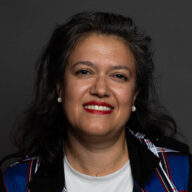 Marisa Figueroa is networks manager at the European Council Foreign Relations. She develops the organizational and advocacy objectives of ECFR’s national offices and coordinates ECFR’s Brussels activities and outreach.

Figueroa joined ECFR as a junior researcher and administrative assistant in the Madrid office in 2008 and later became programme manager there. From August 2016 to February 2018, she was advocacy manager of ECFR. Prior to joining ECFR, Figueroa spent five years at the Spanish think tank Elcano Royal Institute as a programme assistant for several research areas. She also worked on multimedia projects on international topics in Spain. Figueroa studied political science at Universidad Católica de Córdoba (Argentina) and completed a Master’s degree in international relations at Escuela Diplomática (Ministry of Foreign Affairs of Spain) and Universidad Complutense.