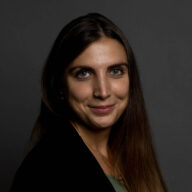 Lorena Stella Martini is the national office assistant in Rome of the European Council on Foreign Relations. Previously, she held the position of advocacy and communication assistant in the same office.

Martini holds a double master’s degree in comparative analysis of Mediterranean societies and international studies from the Mohammed VI Polytechnic University (Morocco) and the University of Turin. She previously obtained a master’s degree in Middle Eastern studies from the Graduate School of Economics and International Relations (ASERI) at the Catholic University of Milan, and a bachelor’s degree in languages for international relations (majors: English and Arabic) from the same university. Throughout her university years, she spent several months in Morocco. Martini has prior professional experience with think tanks and NGOs, and has done research on individual freedoms in Morocco. She is particularly interested in sociopolitical dynamics in the MENA region, with a focus on Morocco and Iraq.

Movement to action: How Russia’s war on Ukraine could reshape EU migration policy

The EU has responded to a huge influx of Ukrainian refugees with an unprecedented show of solidarity. It should take this opportunity to develop a common asylum policy.

Structured approach: How the EU can prepare itself for the next wave of migration

Migration is first and foremost a structural problem, yet the EU persists in responding to it as an emergency. Now is the time to change course.

Both parties have interests in fostering this relation and making it work and go further. To do so, they have to remain firm in their commitments and cooperate to reach realistic and sustainable goals

Lorena Stella Martini comments on the strengthening of relations between Italy and Algeria in the framework of Meloni’s visit to Algiers.

Lorena Stella Martini comments on the relations between Morocco and Spain, with a focus on Ceuta and Melilla

Negotiating new agreements with the Libyan leadership would certainly be extremely complicated right now, given that the country is once again divided among different authorities

Arturo Varvelli and Lorena Stella Martini analyse the foreign policy strategy of the Draghi government towards the Southern Mediterranean, and in particular North Africa