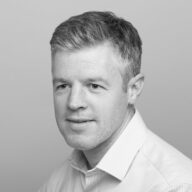 James Lynch was a visiting fellow with the Middle East and North Africa programme at the European Council on Foreign Relations. Lynch started his career at the UK Foreign Office, where he was political officer in the British Embassy in Doha, worked as a MENA research analyst, and headed the FCO Gulf team. He subsequently spent seven years at Amnesty International, where he led work on migrant workers’ rights in the Gulf, and managed the organisation’s research and advocacy on the Gulf states, Yemen, and Iraq. He is a co-director of FairSquare, a human rights research group, and a contributing author to What Next for Britain in the Middle East?: Security, Trade and Foreign Policy after Brexit, published in September 2021.

Governments across the world have powerful digital tools to control and repress their populations. The EU should treat this as an urgent security and political concern. 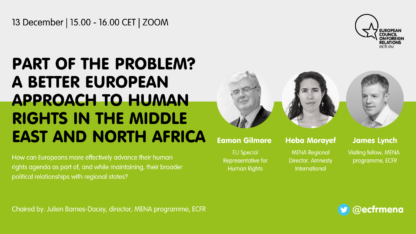 Part of the problem: A better European approach to human rights in the Middle East and North Africa

European states face accusations of neglecting the matter of human rights in their southern neighbourhood, and even of being complicit. Yet they are failing to maximise the influence they could bring to bear.