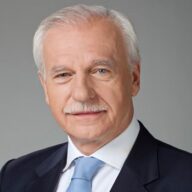 Andrzej Olechowski has served as both minister of foreign affairs and minister of finance of Poland. He has twice been a presidential candidate and is a co-founder of the political party Civic Platform. Previously, he served as secretary of state in the Ministry of Foreign Economic Relations and deputy governor of the National Bank of Poland. He has also worked as an economic affairs officer in Geneva and as an economist at the World Bank in Washington, DC. He sits on the boards of various charitable and educational foundations and is the author of numerous publications on foreign policy.