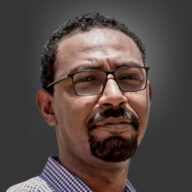 Amgad Fareid Eltayeb was a visiting fellow with the Africa programme at the European Council on Foreign Relations. He previously served as assistant chief of staff to Sudanese prime minister Abdalla Hamdok and as political advisor to the UN special political mission in Sudan (UNITAMS). He contributed to the momentum that led to toppling of Omer Bashir’s Islamist regime in April 2019. He also served in the leadership council of the Sudanese Professional Association, chairing its foreign relations committee, and as a member of the foreign relations committee of the Forces of Freedom and Change.

Eltayeb has made significant social and political contributions to Sudan’s progressive movement. Notably, he was the founder of Nafeer Initiative in 2013: a campaign coordinated a nationwide aid effort for those affected by the torrential floods of that year. He also helped found two of the biggest youth movements in Sudan: Girifina and Sudan Change Now in 2009 and 2010 respectively.

Eltayeb has extensive experience in political analysis and research. He worked for several years as the lead analyst and policy coordinator for the Sudan Democracy First Group, in addition to roles as a collaborative researcher with Oxfam, SIHA, and other organisations. His work has featured in publications such as Foreign Policy, the Sudan Tribune, ‘ITPCM International Commentary’, and others.

Back to barracks: Building democracy after the military coup in Sudan