With elections approaching, the fact that Italy’s EU cohesion profile is approaching Britain’s is cause for grave concern across Europe.

For decades, Italy played a crucial role in building the European Union. For French and German policymakers Europe was a pragmatic means of avoiding conflict through economic integration. But for Italy the European project was civilizational; a matter not so much of the mind but of the heart and soul.

Brussels was the place to create new governance beyond the limits of domestic politics, trapped in the dualism of Christian Democrats and Communists. Europe was the way out.

But today, Italy is the sick man of Europe. Since the early 2000s, Italian governments have slowly retreated from the vanguard of advancing integration. Instead, the rise of Silvio Berlusconi and his Forza Italia established an “Italy first” approach and a cost/benefit view of EU-membership. As a result, Italy has not been seen in the driver’s seat of EU affairs for many years.

The financial and refugee crises have profoundly affected politics and society, nowhere more so than in Italy. Looking at indicators of co-operation across Europe, from trade and financial flows to individual experiences, voting behavior and attitudes, Italy has fallen way behind the other founding member states of the EU. This is the result of a study measuring EU cohesion – the willingness of EU states and citizens to cooperate – for the past decade.

By 2007, before the Lehman Brothers crash, Italy already had the lowest macro-level cohesion among the founding members, but its micro-level of individual cohesion was still higher than the EU-average. Socioeconomic indicators were poor but the Italian people were still strongly pro-European. 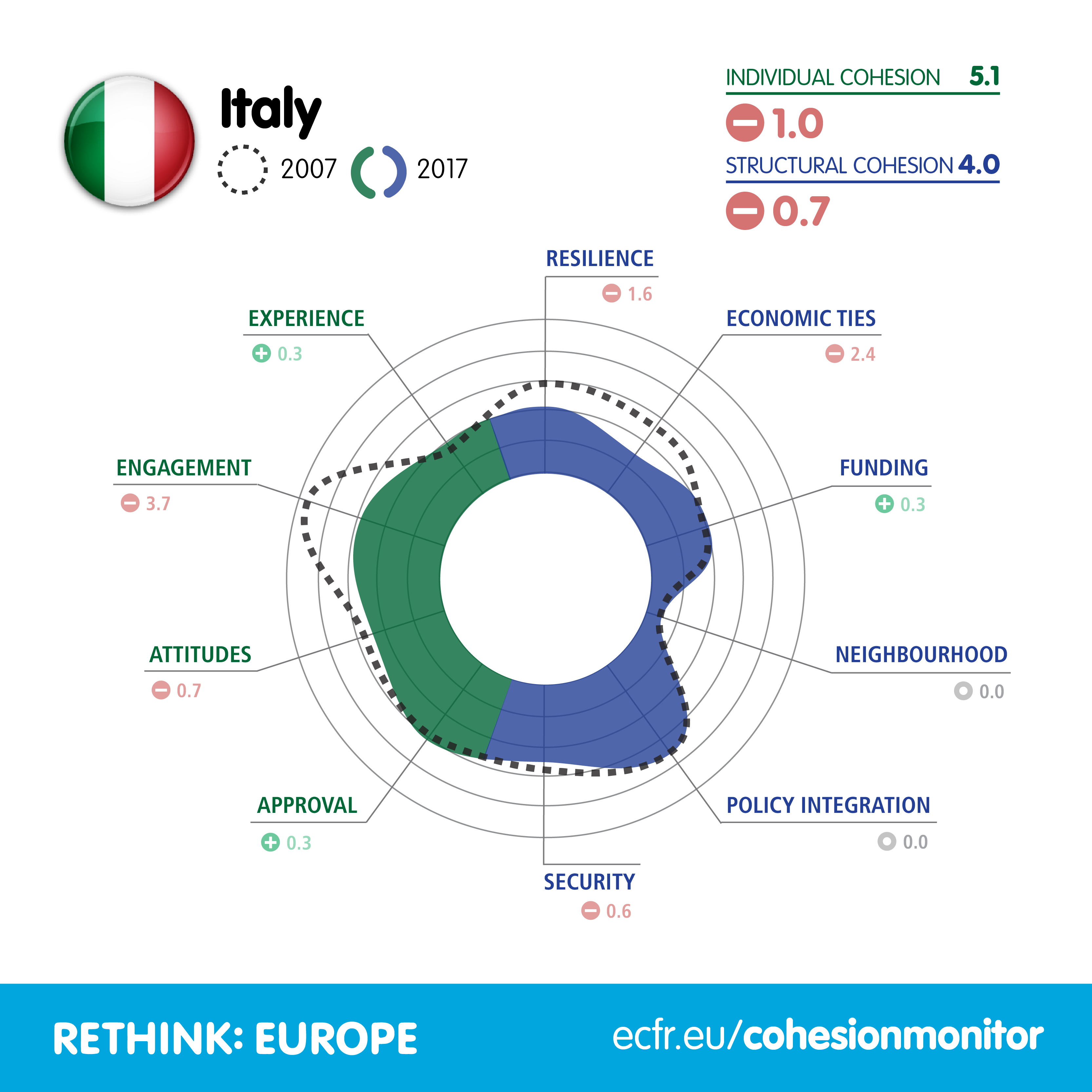 Ten years later both structural and individual cohesion have eroded further. While EU cohesion has grown overall, Italy is emblematic of a decline in cohesion in the west and south of Europe – a decline which has also affected France, Spain, and of course the UK.

Today, all but two indicators of cohesion in Italy fall below the EU average. Only the degree of political participation (no opt-outs) and the level of cooperation on security extend above the average of the 28 member states.

As the comparison between 2007 and 2017 indicates, cohesion in Italy has mostly suffered from a further weakening of the socio-economic argument for Europe, and from the rise of anti-EU or deeply eurosceptic parties. Among the 28 member states, Italy now ranks 23rd on individual cohesion (down 13 places) and 25th on structural cohesion (down 6 rank places).

Italy’s closest neighbor in the geography of the cohesion matrix today is Britain. When the Brexit referendum was held in 2016, the first edition of the “EU Cohesion Monitor” showed Britain’s position in the southwest corner of the matrix, indicating weak cohesion overall. The UK had lost significantly in structural cohesion since 2007. While that change did not cause the negative outcome of the referendum, it did little to prevent it, as domestic recognition of the EU’s value was so low. Low cohesion did not cause Brexit, but it certainly contributed to it. 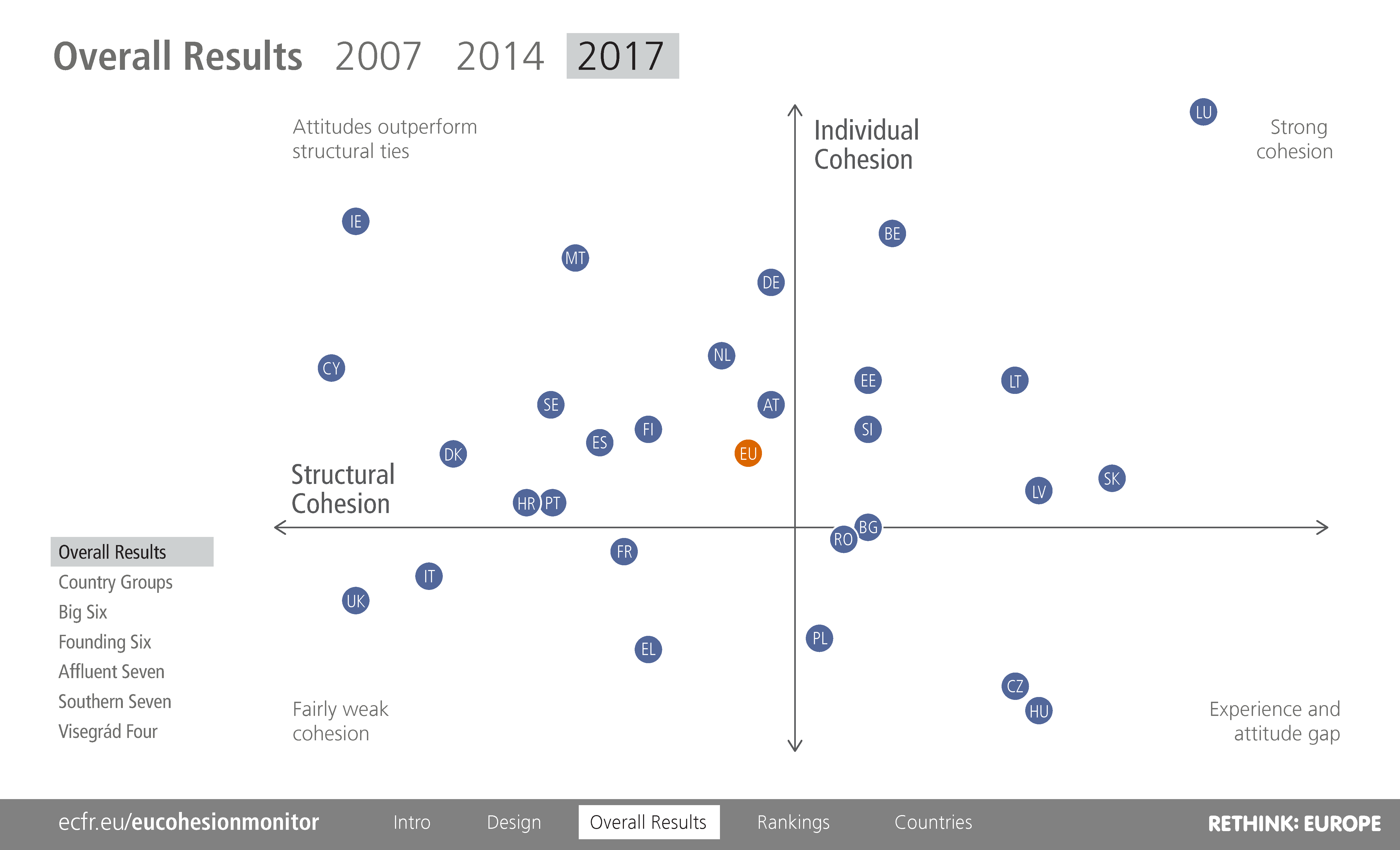 With Italian elections approaching, the fact that Italy’s cohesion profile is following Britain’s path is a cause of grave concern all over Europe. The next Italian government could well be the most anti-EU of Italy’s history. And given Italy’s historic role in building the EU, a Eurosceptic government in Rome would strike at the heart and soul of the European project.

The EU Cohesion Monitor is an index based on publicly accessibly data for all 28 member states drawn from official sources, surveys and indices. Cohesion is defined as the willingness to cooperate within the EU using the sociological understanding of the term. All together 32 factors are assessed, grouped in 10 indicators, six of which measure cohesion on a structural or macro-level of state, society and economy, and four of which measure cohesion on the micro-level of the individual citizen. The analysis, an interactive data atlas and the raw data are available free of charge at www.ecfr.eu/eucohesionmonitor