In the coming weeks, the US administration will intensify its economic pressure on Iran through sanctions designed to curtail the country’s oil exports. Given that these exports account for a significant percentage of state revenue (despite government efforts at economic diversification), the measures will hit Iran hard. Yet the sanctions will also have an impact on energy markets far beyond Iran, and may lead to a rise in global oil prices. Moreover, they could have a negative effect on global energy security by tapping into most of the spare capacity in the market.

Since President Donald Trump withdrew the United States from the Iran nuclear deal (formally known as the Joint Comprehensive Plan of Action, or JCPOA) in May this year, US officials have stated that they aim to prevent Iran from exporting any oil whatsoever. Although the second phase of the new US sanctions only come into effect on 4 November, Iranian oil production and exports have already started to decline – partly because the US has issued conflicting statements on whether it will provide sanctions waivers to some importers, and partly because the August 2018 round of US sanctions set restrictions on payments, shipping, and insurance.

In this series of commentaries, ECFR assesses the likely impact of US sanctions on economic ties between Europe and Iran, covering strategically important areas such as trade in essential goods, energy, and banking. The series examines how European governments can minimise the fallout of their attempts to maintain Iranian compliance with the nuclear deal.

Part 1: Trump’s Iran sanctions: an explainer on their impact for Europe
Part 2: Iran: The case for protecting humanitarian trade
Part 3: Can Iran weather the oil-sanctions storm?

Having borne the brunt of US secondary sanctions in 2012-2015, companies and countries around the world are now well aware of the consequences of non-compliance. They also have a good idea of how accurately the US tracks Iranian exports and how far its surveillance capabilities reach. The Obama administration had to engage in extensive negotiations with importers of Iranian oil to explain the consequences of non-compliance. This time around, the rules of the game are much clearer.

Another factor is that, unlike in 2012, there now is enough oil to make up the shortfall in the market. In recent weeks, traders and importers of Iran’s oil have said they can easily find substitutes for the product. Major oil producers such Saudi Arabia, the United Arab Emirates, and other OPEC members have collectively increased their supply of oil by around 1 mb/d since May, and have signed contracts with importers to provide substitutes for Iran’s oil in the future. However, this substitution of Iranian oil weakens the security of global energy markets: buyers are tapping into most of the world’s spare oil production capacity, heightening the risk of a rise in oil prices.

As oil prices are now much lower than they were between 2012 and 2015, the discount rates at which Iran hopes to export oil provide relatively little incentive for buyers to violate US sanctions. Meanwhile, by restricting financial transactions with Iran and the insurance of Iranian oil, the US sanctions that came in to force in August 2018 have created a tighter regime than that implemented under the Obama administration.

Ambiguities over how the US will enforce its sanctions make it difficult to estimate the size and duration of the coming decline in Iran’s oil exports. While the US sanctions in place during 2012-2015 accompanied similar EU measures and had a basis in UN sanctions targeting Iran’s nuclear programme, the US is now implementing unilateral sanctions while Russia, China, and Europe continue to support the sanctions relief specified in the JCPOA.

Yet US secondary sanctions have proved to be powerful. There are indications that importers of Iranian oil such as Japan, South Korea, Sri Lanka, and most European countries will no longer buy the product after November. Although China has consistently stated that it will continue to import oil from Iran, it is also attempting to use this position as leverage against President Trump in its ongoing trade war with the US. India, which buys more Iranian oil than any country other than China, significantly reduced its imports of the product in August, but is still negotiating with US administration over sanctions waivers.

Following the introduction of US sanctions on Iran-related financial transactions and oil tanker and cargo insurance, Iran’s crude oil exports dropped from an estimated 2.3 mb/d in July 2018 to less than 2 mb/d the following month. As such, the cause of the decline is not necessarily compliance with the US ban on Iran’s oil imports but rather the new challenges of paying for, and safely transporting, the product. Judging by purchase contracts at the National Iranian Oil Company and other sources, exports of Iranian oil may drop as low as 750,000-850,000 b/d by November. 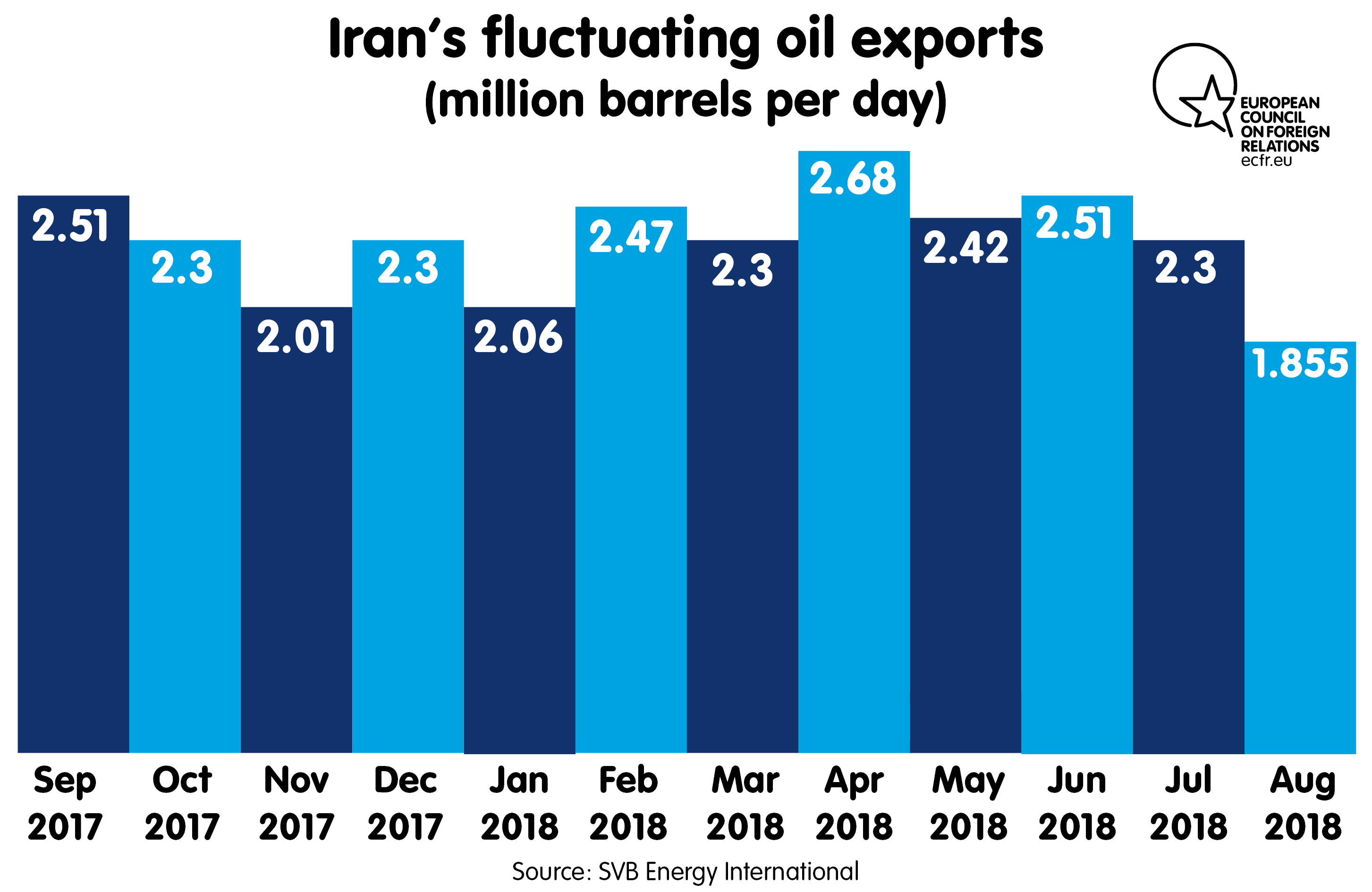 In August, amid this sharp decline in Iranian oil exports, OPEC increased oil production to 32.89 mb/d, its highest level in ten months. It appears likely that OPEC will further increase production, despite Iran’s efforts to lobby against such a move. Potentially adding to Tehran’s woes, Russia – which is not a member of OPEC – increased its oil output by around 148,000 b/d to 11.215 mb/d in July, coming close to its post-Soviet record high of 11.247 mb/d.

As no sanctions regime is immune to shifts in the market, time could work against the US policymakers targeting Iran. Along with the increased oil supply from OPEC countries and Russia, other market conditions could have a drastic effect on Iran’s oil exports. The US administration’s ambiguous statements on the scope and duration of its sanctions could lead to non-compliance and even cause the measures to fall apart earlier than planned. For instance, if countries such as India and China continue to import discounted Iranian oil while others stop doing so, the sanctions regime may gradually become ineffective. This is especially so given that, if oil prices rise in line with market expectations, Iran’s discounts on barrels of oil and freight costs will become increasingly appealing.

Nonetheless, the new round of US sanctions will undoubtedly damage Iran’s economy. At a time when it is grappling with several domestic economic challenges, the Iranian government will have to be careful in dealing with further cuts to its revenue. Of course, having survived a series of US and EU oil embargos in the last four decades, Iranian leaders may decide to weather this latest storm through strategic patience and reliance on an “economy of resistance”. Tehran may feel it can manage these sanctions while continuing to comply with the JCPOA, allowing the measures to gradually erode.

hina, Russia, and many European countries seemingly aim to support this approach, creating financial incentives that maintain Iranian compliance with the JCPOA (even if most European countries and companies are likely to comply with US sanctions). These incentives will be designed to help Iran’s economy survive the sanctions, partly by mitigating the decline in Iranian oil exports.

It is unclear whether this approach will work. The Iranian economy currently appears vulnerable to the new sanctions: the Central Back of Iran has been forced to devalue the rial much faster in recent months than it did during 2012-2015. The aftershocks of the currency devaluation and rapid inflation may exacerbate the sporadic unrest across the country that began last January – mostly due to Iranians’ economic grievances.

If American sanctions truly block the majority of Iran’s oil exports, the country may opt for an aggressive response. Iranian leaders, including President Hassan Rouhani, have suggested that Iran will disrupt oil shipments from neighbouring countries, targeting the Strait of Hormuz and/or Bab el-Mandeb. Iran could also engage in cyber sabotage or attacks in the Middle East intended to create panic among oil traders, driving up global oil prices. Such operations would create widespread chaos and perhaps lead to the formation a global political and military alliance against Iran.

The prospect of further talks between Tehran and Washington is fading as Iran’s oil production and exports continue their decline. But the ongoing negotiations between Iranian leaders and supporters of the JCPOA may produce a compromise that encourages Iran to wait patiently, in the hope that the course of events will turn in its favour and it will overcome the sanctions.

Sara Vakhshouri is the president of SVB Energy International.