ECFR Warsaw office and the Heinrich Böll Foundation Representation in Warsaw had the opportunity to host a public debate titled Ukraine Fatigue? How the EU should support Ukrainian transformation and headed by three experts on the topic of Ukraine: Gustav Gressel, ECFR Senior Policy Fellow, Katarzyna Pełczyńska-Nałęcz, head of the Open Europe programme at Stefan Batory Foundation and member of ECFR Council, and Yevhen Hlibovytsky, member of Nestor strategic consultancy group. The debate was based on a recent publication by Mr Gressel Keeping Up Appearances: How Europe is Supporting Ukraine’s Transformation and moderated by Piotr Buras, head of ECFR Warsaw Office. 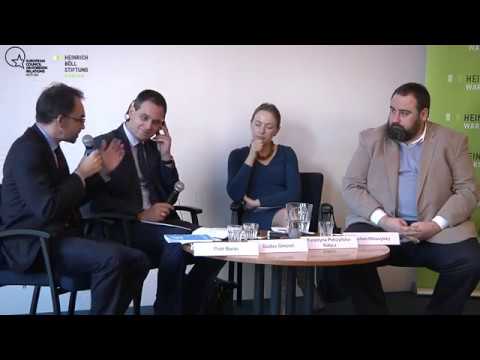 The discussion was dominated by several themes: an assessment of reforms in Ukraine so far, disagreements over the importance and the future of the Minsk agreements, the future of Ukraine-EU relations in the face of a growing fatigue and a plethora of European crises, and the role of Poland in the transition process.

Mr Gressel presented the progress made in reforming various sectors of Ukrainian government and society, praising the changes in the defence sector, continuing tax devolution, agricultural reforms and the implementation of a transparent electronic procurement system, all of which have already brought palpable results. However, in his view the judiciary, law enforcement and security services remain stagnant and corrupt. In assessing Ukrainian reforms Mr Gressel highlighted the importance of personnel changes combined with grass-roots activity and increased oversight, while downplaying institutional factors. This view was supported by Mr Hlibovytsky, who characterised the Ukrainian state as “a low-trust actor” in contrast to high trust placed in the civil society, and advocated a shift in methods and expectations as the pace of the reform effort inevitably slows down. He also underscored the surprising reduction of oligarchic influence in the government and society, citing US pressure as one of the factors behind this development.

As for the Minsk agreements, the panellists were of the same mind that their full implementation would be neither feasible nor desirable, with Ms Pełczyńska-Nałęcz arguing that it would result in an internally divided, non-functional Ukraine rife with criminal influence. They differed, however, on the tactical importance of the agreements: Mr Gressel argued that the EU pays too much attention to the issue to the detriment of Ukrainian reform efforts and highlighted the role of military reforms, rather than diplomatic activity, in stopping in its tracks the Russian summer offensive in 2015. Ms Pełczyńska-Nałęcz countered that Ukraine needs to remain flexible on the agreements as they are an important face-saving measure for all parties involved and contain provisions worth implementing, particularly in the humanitarian domain. To this Mr Gressel replied that the Ukrainian government had after a time learned to treat the issue instrumentally, however this is hampered by the lack of intra-Ukrainian communication. Mr Hlibovytsky, on the other hand, argued that the Minsk agreements distort the optics, burying the example of a successful transformation of post-Soviet identity under a crisis-management narrative.

The panellists presented different, though not necessarily contradictory, perspectives on EU-Ukraine relations. Ms Pełczyńska-Nałęcz stated that the due to a multitude of crises EU has moved from a strategic offensive stance – actively promoting its values and institutions – through strategic defence – protection of these values and institutions – to reach a state of inertial defence, where the focus is first and foremost on the avoidance of war and conflict, forcing Ukraine and its advocates to adapt. She also argued that Ukraine has to become a partner of the EU rather than just a recipient of European support. However, Mr Hlibovytsky presented a sombre view of EU support for Ukraine, claiming that its input in reform process often suffers from lack of understanding of domestic situation and in some case is counterproductive. He stated a common perception of “goalpost moving” by the EU in Ukraine, a point echoed by Mr Gressel, which feeds into a growing scepticism concerning the institutional dimension of European integration. Mr Hlibovytsky also lamented the lack of an attractive goal to motivate Ukrainians after the Association Agreement and visa-free travek with the EU. Ms Pełczyńska-Nałęcz, however, countered, that the implementation of the Association Agreement alone is a long task with tangible benefits. Mr Gressel stated that the EU policy towards Ukraine is becoming more consisted but criticised European leaders for limiting their Russia containment policy to a leaky regime of sanctions. He also advocated an increased use of benchmarks – similar to those used for pre-accession countries – and aid evaluation as means for increasing aid effectiveness and efficiency. DCFTA implementation, he argued, will benefit from the expertise of “new” EU member-states, while satisfying EU standards will not only enable Ukraine to trade and cooperate with the Union, but will also increase its competitiveness and credibility on other markets.

Finally, Ms Pełczyńska-Nałęcz and Mr Hlibovytsky commented on the role of Poland in Ukrainian transformation. Ms Pełczyńska-Nałęcz argued for Poland to transition away from its current role as Ukraine’s advocate to become a credible intermediary and interpreter between it and the EU. Mr Hlibovytsky, however, bemoaned the deterioration of Polish-Ukrainian debate – in large part due to historical misunderstandings – and the invisibility of more contemporary narratives, such as those of Ukrainians living in Poland and rest of Europe. In his view, the Polish government has vacated its unique role as a partner that understands “the shades of grey” in Ukraine.