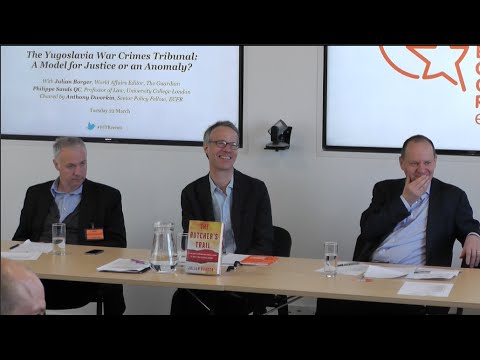 On 24 March, the Hague tribunal handed down its verdict in the case against former Bosnian Serb President Radovan Karadžić for genocide and other charges – the most significant verdict yet in the tribunal’s history. The event looked at the ICTY’s track record about the future direction and potential of the International Criminal Court.

Julian Borger (@JulianBorger) is the world affairs editor for The Guardian. He covered the Bosnian War for the BBC and The Guardian, and returned to the Balkans to report on the Kosovo conflict in 1999. He has also served as The Guardian’s Middle East correspondent and its Washington bureau chief. Borger was part of the Guardian team that won the 2014 Pulitzer Prize for public service journalism for its coverage of the Snowden files on mass surveillance. He is the author of the recently published book The Butcher's Trail: How the Search for Balkan War Criminals Became the World's Most Successful Manhunt.

Philippe Sands QC (@PhilippeSands) is professor of law at University College London and a barrister at Matrix Chambers. He has been involved in several cases arising from the collapse of the former SFRY. His new book East West Street: On the Origins of Genocide and Crimes against Humanity is published on 26 May (Weidenfeld & Nicolson).

Anthony Dworkin (@AnthonyDworkin) is a Senior Policy Fellow at ECFR, where he leads the organisation’s work in the area of human rights, democracy, and justice as well as working on political developments in North Africa after the Arab uprisings. He was formerly the executive director of the Crimes of War Project and editor of the book Crimes of War: What the Public Should Know 2.0 (Norton, 2007).