Daniel Smilov, Political Scientist and Programme Director at the CLS

On 22 October, ECFR Sofia gathered 20 political representatives, analysts, academics, and journalists to discuss Bulgaria’s perspective on German foreign policy and the impact of the Ukraine crisis on the Balkans and the Black Sea region. The debate was part of the German foreign policy review being held in European capitals. It took place on the eve of the formation of a new Bulgarian government, and the discussion outlined the perceptions and expectations of Germany’s foreign policy held by different sections of Bulgaria’s political spectrum.

Attitudes towards and expectations of Germany

Strong disintegrational forces are on the rise within the European Union, such as, for example, Euroscepticism, the “different-speed” approach to Europe, and the ethnic tensions that trouble the Western Balkans. In light of this fact, the participants identified one key question: is Germany interested in investing in a stronger Europe? Although Germany has been perhaps a reluctant leader, its leadership within the EU is both genuine and necessary.

The participants said that there is a lack of understanding of Germany within Bulgaria, mainly due to uneasiness as to whether our appreciation for Germany is based on values or on interests. Traditionally, average citizens as well as the political establishment have in general had a positive attitude towards German policies. The work of German political foundations has been extremely important in Bulgaria. In recent years, however, there have been some disappointments, most notably regarding the politicisation of the Schengen issue and negative propaganda on Bulgarian working migrants. It will be important in the future to avoid increased divisions between eurozone and non-eurozone countries.

Bulgaria is a country situated at the meeting point of influences from the EU, Russia, and Turkey. Therefore, it sees German leadership as very important, within the EU context as well as with regard to NATO’s positioning in the region. As south-east Europeans, Bulgarians have always looked to Russia and Germany as two big powers on either side of the Bulgarian territory and have carefully watched the relations between the two – and the German adoption of a realpolitik approach towards Russia has not gone unnoticed in Bulgaria. Seeing itself at the intersection of numerous influences, interests, and responsibilities, Bulgaria perceives Germany as a natural counter-balancing agent that can ensure stability in the region, especially given the repercussions of Russian President Vladimir Putin’s policies on the Western Balkans and Turkish President Recep Tayyip Erdogan’s policies on the Middle East. Interestingly, Bulgaria looks at Turkey predominantly through the lens of its role in resolving the ISIS crisis, which it sees as one of the most pressing issues on the European foreign policy agenda.

According to the officials present, Bulgaria would like to see the enlargement process revitalised. It wants to see the continuation of progress on the Black Sea region, the Danube Strategy, energy security cooperation, and the Common Security and Defence Policy elements that are relevant to the region. The growing influence of Russia in the Western Balkans has a negative effect on the EU agenda of the countries in the region. 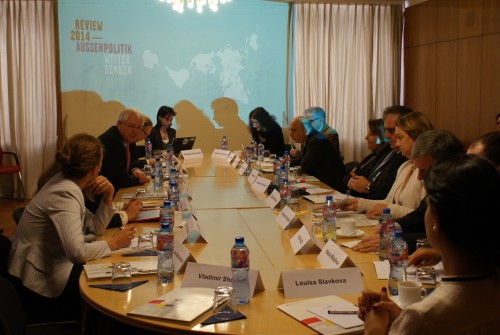 The crisis in Ukraine is seen from two angles. On the one hand, Europe should seek to draw conclusions from the crisis with regard to the tenets of the international order that it has been promoting. Does the situation in Ukraine mean the “end of history” for the EU? Should it abandon its “illusions” that it can use soft power to protect its interests as well as aid like-minded countries on their path to democratisation? And if this is so, what is the EU’s end game for Ukraine? What is the EU willing and able to offer so as to create a permanent solution?

A more practical vein of arguments looked at the Ukrainian problem in terms of ways to offset the dependencies that Russia uses to “buy” itself political power. As a country completely dependent on Russian gas, Bulgaria is concerned about the prospect of a gas crisis in the winter. Bulgaria is also dependent on Russian arms supplies – the air force is entirely reliant on Russian equipment and Russian supplies of other types of materiel are similarly important. We should discuss the choices that we have to carefully manage this dependence: do we need to develop the army as a strategic tool or should we decrease the military budget and rely on NATO? Bulgarians share the German public’s reluctance towards any military deployment abroad.

Current Russian behaviour is aimed at destabilising the periphery of the EU by means of corruption, anti-EU propaganda, and energy dependency so as to rebuild Russia’s influence in the region. As the core of the EU, Germany should bear this in mind. Russia is more dependent on the EU than the EU is on it, so if we impose sanctions, Russia suffers more than we do. Any long-term strategy, however, should include engaging Russia in a dialogue with the EU, while gradually decreasing our energy dependence on Russia. We should adopt tailor-made instruments for the various countries within the Eastern Partnership – which was, in fact, Germany’s own idea at the outset of the Eastern Partnership.