On 24.04 in Warsaw, ECFR Warsaw co-organized an event with the Institute for Advanced Studies / Political Critique and Friedrich Ebert Foundation on „German foreign policy at the crossroads“.  In the context of Stefan Meister's recent paper on German-Russian relations, the meeting concerned, to a greater extent, the Polish understanding of these dynamics.

Piotr Buras set up the ground for the talk by referring to a Wolfgang Ischinger's statement that the Germany is a power focused on maintaining the status quo and adhering to soft power instruments. This strategy is not sustainable and was challenged by high international expectations towards Germany and its involvement in the world politics including the Ukraine crisis.

Jörg Lau replied that undeniably Germany needs to be more active, he referred to words of Radek Sikorski, that active Germany is better for Poland and Europe than passive. He listed three major reasons for reframing the German foreign policy:
– the current President of Germany, Joachim Gauck is very engaged in the human rights field,
-disillusionment of non-involvement policies that pushed Germany aside; Guido Westerwelle was especially blamed for weakening the Germany's position,
-the current Ukrainian crisis demands more responsibility of Germany in the international field.

Hans Kundnani explained that since year 2000 Germany became a country increasingly dependent on the export of its goods and services. The economic interests have been major drives for the Berlin's policies. Hans Kundnani doubted whether the discussed change in Germany goes beyond rhetoric's when seeing the helplessness of the German MFA. Now it is a crucial moment to define how to respond to a powerful partner (Russia) who does not want to cooperate. China, another strong partner of EU, might be a much more challenging case in the future.

Anna Kwiatkowska-Drożdż agreed with Hans Kundnani by saying that Germany has no strategic concept of its relations with Russia, and this is based on the opinion of German intellectuals. She also mentioned the failed Partnership for Modernization program. In her opinion, Germany still believes in the anachronistic Ostpolitik. The most disturbing fact is that Russia is the only country of the post-Soviet bloc which is treated seriously by Germany as partner for a dialogue on security policies and other issues.  As for the solution to the problems caused by Putin's Russia, the underlying expectation is that at some point Putin will simply step down from Kremlin. There are also many instances of Germany's activities that undermine sanctions imposed on Russia which were meant to lead to a political isolation.

Jörg Lau reminded that the Ukrainian crisis has been caused by the success of the EU Eastern Neighbourhood policy which turned out to be very attractive for Ukrainian people. This could have almost led to demise of Ukraine. Jörg Lau sees the helplessness on the Ukrainian side as there is no comprehensive vision of Ukrainian future. The crisis is a beginning of something new, and the military aspects in this conflict are overrated.  On the question coming from Piotr Buras  that 40%+ Germans want their country to be a middlemen in the conflict, Jörg Lau challenged the statement by saying that results are inconclusive and sometimes can prove the opposite.

In the Q&A session we received thought-provoking commentaries from the audience. Witold Rodkiewicz from the Centre for Eastern Studies described Putin's policies as very pragmatic. He said that Germany can be blamed to some extent for the Ukrainian crisis as EU already allowed Putin to take over territories adjacent to Georgia in 2008. The price tag for Putin's intrusive policies in that context was too low.  No wonder that, in Putin's calculation, Ukrainian crisis has not generated high expenses for his regime yet. The key word of the Germany's policy is still the interdependence, which completely failed and will not stop Putin. Knut Detlefsen, from Friedrich Ebert Foundation, said that the change in German foreign policy may be a turning point and a chance for the EU foreign policy that could enhance EU's standing in the global politics. 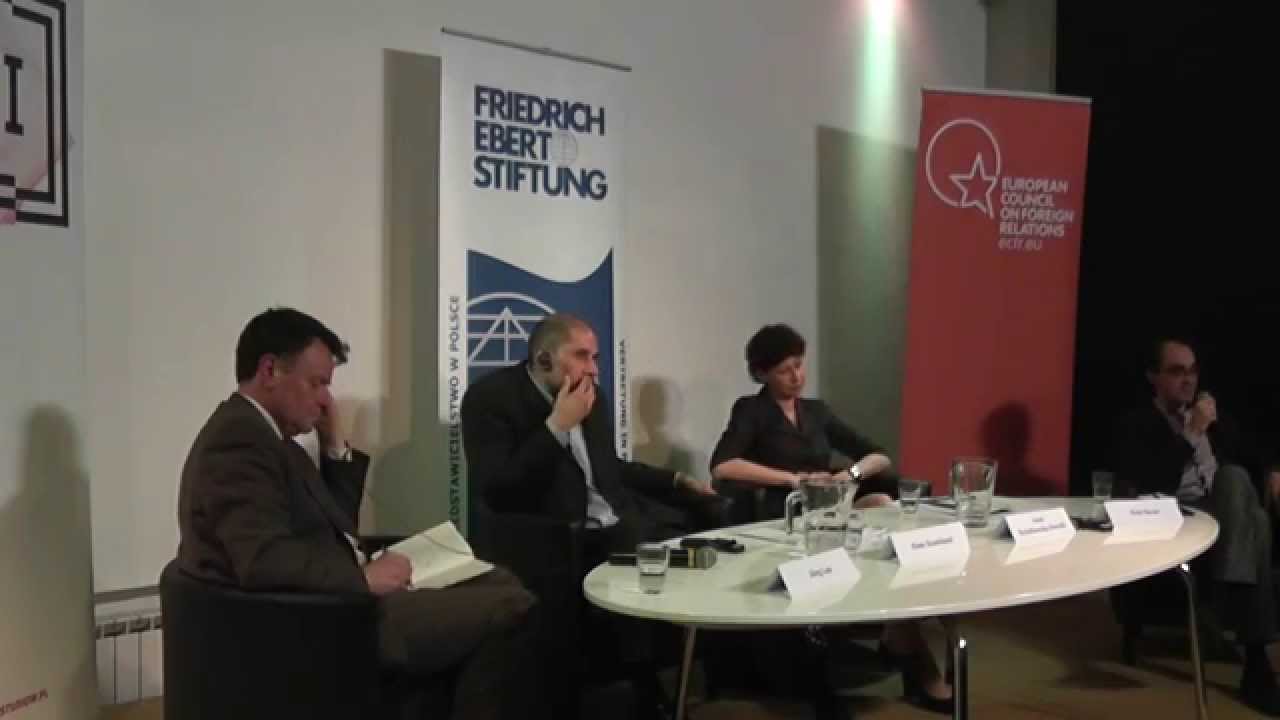