The seminar was a part of a wider reflection on the EU’s strategy in the changing world conducted jointly by ECFR, Confederation Lewiatan and Konrad Adenauer Stiftung.

The seminar was conducted under Chatham House Rule so no names will be quoted and associated with the statements below. 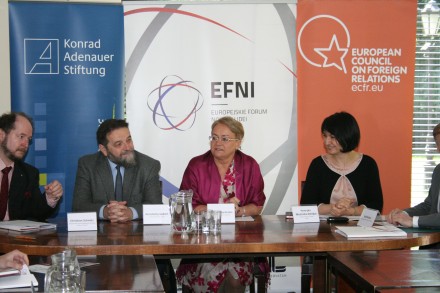 On EU in the global world

There was a rather broad consensus that the role of High Representative should be strengthened in the process of shaping the foreign policy of the EU.  This post requires a close cooperation with European Commission and other EU institutions and an unofficial mandate from them to act. However, a remark has been made, that so far, the spectrum of the issues the High Rep. has to deal with might be slightly too wide and there should be a debate on priority areas and policy directions for the new High Representative in order to avoid the situation where he or she is doing very little  but in every aspect of the EU foreign policy.

EU foreign affairs need  more ‘policy-wise’ approach – currently we can observe a form of cooperation not oriented on the common interests. The important question to ask would be whether the EU has enough of common interest to conduct such a policy. Propositions such us Polish initiative on energy union requires wide and thorough debate. There is consensus among member states that the common policy should enforce stability and strategic security in the region.

The Ukraine crisis showed vulnerability of UE’s foreign policy to the interests of particular states and economic interdependencies with Russia. The important question to discuss within the EU is whether the crises like this  are determining the EU foreign policy as a whole and where this foreign policy is actually shaped. Are the foreign ministers responsible for the foreign policy or they are just executing their governments’ strategies? It is to be brought up, while discussing the EU neighborhood, that while the Europe pictures herself as peaceful, some international actors perceive the old continent as a threat to their interests. ENP needs rethinking. Poland and Spain could take a lead in shaping the ‘East-South trade of policy’ with their experience both in MENA region and Eastern Europe. ENP should also be talked about not in singular, but in plural form.

We have to remember, that for some EU countries the Ukraine Crisis is not a real game changer. They find it hard to understand why defense should matter. CSDP is not ready to perform collective defense in the region. The Franco-German cooperation has reached its low point and now new leaders need to step up. Possibly, a group of “Big 6” could take the lead, but it is extremely tricky to get them agree on particular issues. Germany has been absent in the discussion on military forces, but this is now changing.

It is arguable, whether the growth in expenditures for the defense would be enough to increase the effectiveness of EU military forces. Definitely, a more effective spending of the resources which EU states already provide for the common budget is needed, but also a wide debate on the areas of spending. There is a rather significant discrepancy between the strategic interests of Eastern European countries and their Western neighbours.