The data is extracted from a national representative study, conducted by Alpha Research on demand of the European Council on Foreign Relations for the period 23 February – 4 March 2015. 1000 citizens of age were interviewed at their homes throughout the country. A doubly stratified sample was used on the basis of region and type of the settlement. The respondents are sampled through sex, age, and level of education quotas.

Bulgarians continue to like Russia but they do not believe that the country can be a model for development and provide more credible guarantees for prosperity and security than the membership in the EU and NATO – this is the main finding from the study on the public opinion on the conflict in Ukraine and the position of Bulgaria done by the sociological agency Alpha Research on demand of the European Council on Foreign Relations.

Despite the Crimea annexation and the conflict in Ukraine, the emotional attachment of the Bulgarian people to Russia remains strong. Even after the events from the past year, the positive attitude towards the country has remained unchanged for 54% of the interviewees and 7% claim that they support Russia more today than before the Crimea annexation. For 40% of the interviewees, the actions of Russia in this conflict provoke a negative attitude. From them, only 9% state that they have had a negative attitude towards Russia before the conflict and another 30% have changed negatively their attitude due to the Russian policy towards Ukraine. To recap, only in a year Russia managed to provoke in the generally Russia-friendly Bulgarian population a change towards a negative attitude (in 30% of the interviewees) that is four times larger than the change towards a positive attitude (only in 7% of the interviewees). The main social groups among which Russia becomes unpopular are citizens of the capital and above all, people between 18 and 30 years of age. Meanwhile, people aged over 60 remain the nucleus of the support for the Russian policy. 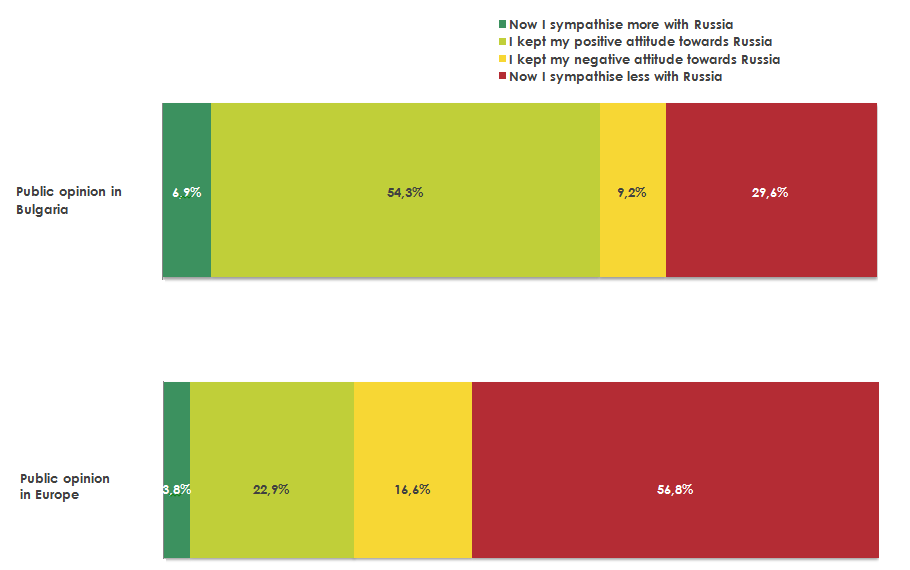 Although traditionally reserved towards the participation of Bulgaria in military unions, the majority of the Bulgarians support the country’s membership in NATO. For 42% of the people, our participation in the Alliance is important for the Bulgarian defence and security, as opposed to 22% who believe that the membership is harmful for the country. 53% think that Bulgaria should fulfil all its obligations as a member of the Alliance, 32% believe that, depending on the situation, we could not fulfil some of them and only 14% state that we should not fulfil any of them and it would be better if Bulgaria left NATO.

Given the long-standing economic relationship between Bulgaria and Russia, the majority of Bulgarians (61%) do not support the imposition of severe sanctions against Russia as opposed to 39% who would support it.

Would you approve the imposition of additional sanctions on Russia if it violates the ceasefire agreement in Ukraine?

The importance of the commercial and tourist exchange with Russia, or simply the fact that a portion of the people sympathises with this country, do not put into question the European and Euro-Atlantic choice of Bulgaria for the great majority of the Bulgarian population. On a hypothetic referendum regarding the foreign policy future of the country, 63% would vote “yes” for the conservation of the orientation towards NATO and the EU and 33% would vote “yes” for a pre-orientation towards Russia and the Eurasian Union.

The public opinion remains practically unchanged in comparison with last year. The pro-European orientation and the support for EU policy prevails in all education and age groups. The desire for a political union with Russia dominates only among the supports of the Bulgarian Socialist Party, Alternative for Bulgarian Revival and Ataka. In the electorates of all three parties around 35-38% support the EU as opposed to 59-62% who would prefer a union with Russia. For the past year, there is no change in the opinion and the number of these groups. The new trend is the radicalisation of the so called “extreme political Russophiles” (around 6-8%) who support Russia’s policy unconditionally to such an extent that they are willing to prioritise it at the expense of the national interests.

The strong figures and leaders who could influence in a positive way the outcome of the Russia-Ukraine conflict are perceived to be the Russian President Vladimir Putin (51%); the German Chancellor Angela Merkel (31%), and the US President Barack Obama (25%). The EU and its leaders are seen as missing in the resolution of the conflict – only 2-4% think that the President of the European Council Donald Tusk, the President of the European Commission Jean-Claude Juncker and the High Representative Federica Mogherini are capable of influencing positively the outcome of the crisis.

The geographic location of Bulgaria, the military conflicts not too far away from the northern and the southern borders as well as the terrorist attacks in different parts of the world in the past months focus further the attention of the public of those issues. 75% of the people think that the actions of the Islamic State and similar terrorist organisations are a bigger threat to peace than the Russia-Ukraine conflict. This is yet another reason Bulgarians insist on the participation of Bulgaria in coalitions and organisations which are capable of guaranteeing its national security.

Which of the two represents a bigger threat for the peace in Bulgaria? 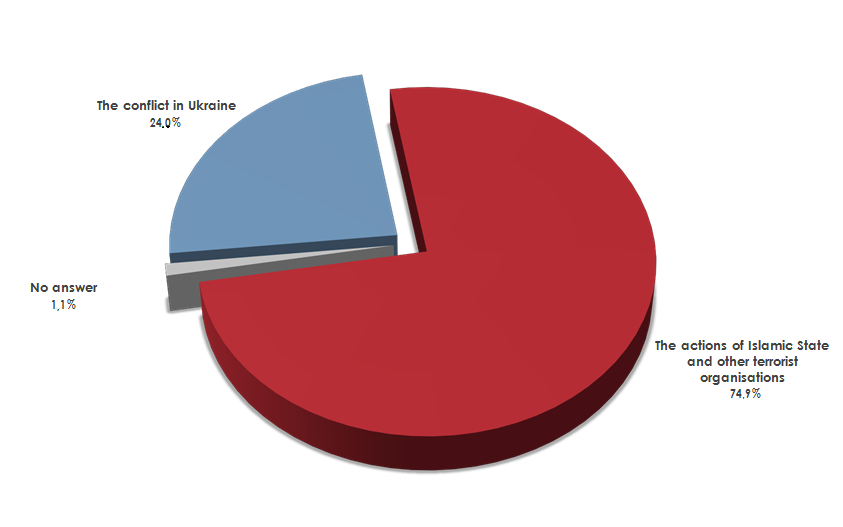