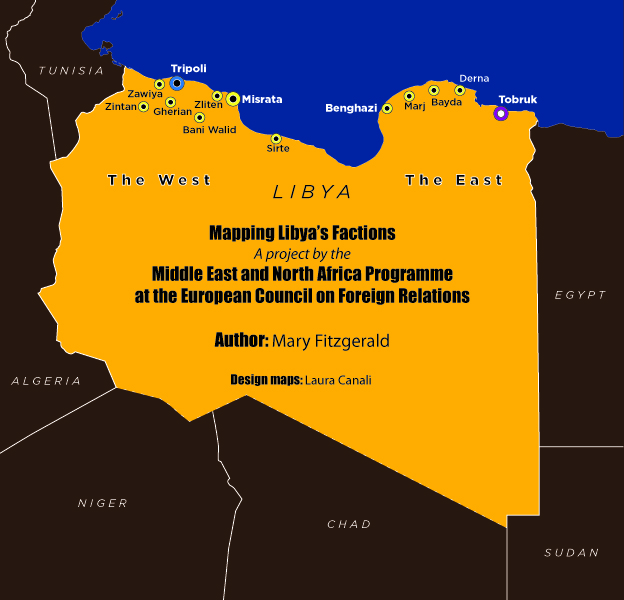 The conflict in Libya is often seen as too complicated to understand and too difficult to solve. With various interventions by regional powers, and dozens of different armed groups involved, loosely part of two broad coalitions that each have its own government claiming legitimacy, the complications are headache-inducing. Hence, Libya is often neglected by European policy-makers and by public opinion despite its proximity to the EU, just 350 km south of Malta and Italy.

For this reason, ECFR conducted a mapping exercise of the different political and armed groups in Libya. The author, Mary Fitzgerald, is an award-winning journalist and analyst who has reported from Libya since 2011. “Mapping Libya’s factions” focuses on the politicos and the militias that are more involved in the fighting that started in May 2014 – these are mostly located nearer to the Mediterranean coast, while the South of Libya has been the site of more longstanding local conflicts which are only partially related to the ongoing civil war.

While this mapping exercise was underway, the Islamic State set up its first bases in Libya, starting with the eastern city of Derna and then quickly spreading as far as Tripoli in the west. With the first big attack in the capital, on 27 January against the Corinthia Hotel, the Islamic State attracted Western attention to Libya. Yet it is hard to separate the civil war that started in 2014 with the rise of IS in the country: the former breeds the latter.

Those concerned with the growing presence of jihadists in Europe’s nearest neighbourhood should therefore also focus on the Libyan civil war and on ways to end it peacefully. The current conflict can, in fact, be mapped (albeit within limits and with an ever-present risk of errors), just as there are policies that can be implemented to bring about a political solution. The UN-led political dialogue is important and all efforts should be directed towards its success. But other measures are needed as well, such as the “Libyanization” of the fight against IS in which the West pressures the different factions to fight against IS instead of fighting each other. Also, preserving the independence of Libyan economic institutions is important, just as is working on local security plans.

For most of these things to be implemented, a full understanding of the different Libyan actors is essential. This mapping exercise is meant to be a first step in this direction, as a well as a resource.

From parliament to street: Iraq’s emerging politics of domination

Tools of influence: Drone proliferation in the Middle East and North Africa