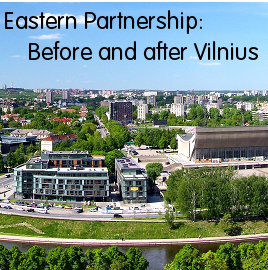 This memorandum is part of a joint initiative of the German Council on Foreign Relations (DGAP) and ECFR in cooperation with the Robert Bosch Stiftung and the Foundation for German-Polish Cooperation. It has been signed by Andrzej Olechowski (former Minister of Foreign Affairs), Adam D. Rotfeld (former Minister of Foreign Affairs, Co-Chairman of Polish- Russian Group on Difficult Matters), Rainder Steenblock (Green Party Politician, former Member of the Bundestag), Rita Süssmuth (CDU Politician, former President of the Bundestag) and Karsten Voigt (SPD politician, former Coordinator of the German-North American Cooperation at the German MFA) and will presented at an event in Berlin on 22 November.

The Eastern Partnership (EaP) summit in Vilnius may mark a turning point in the EU’s policy towards its Eastern neighbours. If the association agreement with Ukraine is signed and the agreements with Moldova and Georgia are initialled, this will be a major step towards bringing the Eastern partners closer to the EU, stabilising the Eastern neighbourhood, and transforming these countries in line with the principles of rule of law, democracy, and free market economies. If this process is delayed, it may result in negative consequences for the EU and its Eastern neighbours. Nevertheless, the summit in Vilnius will not mark the end of history. The need for a bolder approach by the EU to tackle the challenges emerging in its Eastern neighbourhood will not diminish. On the contrary, the prospective developments necessitate new strategic thinking among the EU member states and its institutions.

Today, the EU’s Eastern policy is facing a decisive test.

Firstly, the political game in the Eastern neighbourhood before the summit in Vilnius shows that Russia has now realised that the EU is serious about bringing the Eastern neighbours closer in terms of universal values and European norms and procedures, as well as economic integration and political co-operation. Consequently, Moscow has been trying to prevent this by pressing these countries to join the Eurasian Economic Union that will be established in January 2015, imposing trade barriers, and openly threatening them with wide-ranging negative consequences (in the form of new trade wars) in case they decide to embark on the path of integration with the EU. This pressure is likely to be maintained if the summit in Vilnius is a success. Moscow will certainly try to exert influence on the ratification process. The EU therefore has to find a way to respond and show effective solidarity with its Eastern neighbours.

Secondly, the decision of the Armenian government to join the Russian-led customs union, the ambiguous position of Georgia (which is floating this idea), as well as the state of democratic transition in Ukraine show that the EU’s Eastern policy has only had a limited impact on the processes going on in the Eastern neighbourhood and that the success record of this policy has been limited. The deficits of the Eastern policy are well known: the lack of strategic interest, largely bureaucratic approach, tensions between EU member states, weak incentives for meeting the EU’s expectations and demands. Insufficient progress in the democratisation process in the EaP countries, as well as the EU’s lukewarm engagement, has led to the stagnation of the Eastern Partnership. It is in the European Union’s interest and is its responsibility to reverse this process now.

Most importantly, Germany and Poland should both play leading roles in this endeavour. Over recent years many voices have called for closer co-operation between both countries in order to conduct more effective and co-ordinated political action. However, although the Eastern policy is one of the most frequently discussed issues by Warsaw and Berlin, it has not translated into meaningful political initiatives. Part of the reason for this has been each country’s diverging interests and perceptions regarding the EU’s Eastern neighbours. However, German and Polish approaches have changed considerably in recent years. There is much less disagreement between Polish and German elites about the analysis of Russian foreign policy or the state of democracy in Ukraine. This better mutual understanding with regards to Eastern Europe has proved to be one of the main prerequisites for the foundations of the new Polish-German “partnership for Europe”. The necessity of strengthening the EU Eastern policy “beyond the summit of Vilnius” means that a closer Polish-German co-operation in this field is indispensable.

There is a lot Poland and Germany can do together:

First of all, they should help the summit in Vilnius to be a success. The association agreement and the Deep and Comprehensive Free Trade Area (DCFTA) with Ukraine should be signed and the agreements with Moldova and Georgia initialled. The time is ripe despite the well-known deficits in the democratisation process and enforcement of the rule of law in some of the countries.

Secondly, Poland and Germany should insist that the establishment of the rule of law is given priority in the implementation process of the new agreements and in the run-up to their ratification. The goal and ambition of the EU is to support the democratisation process in the EaP countries. However, the rule of law is the first, indispensable precondition of this transformation. It is also crucial for the successful implementation of the DCFTA with Ukraine. As a result, the ratification process (in the European Parliament as well as in national parliaments) should focus on the enactment of the key structural reforms (judiciary). Furthermore, technical assistance programs in that area should be offered to the EaP countries. This is the only way for the EU to preserve leverage on this country after it has signed the agreement.

Thirdly, after the agreements have been signed, both sides – the Eastern partners and the EU – will bear the responsibility for making them work. While the association agreements will bring major and lasting benefits to both the associated partners and the EU, their implementation will involve some short-term, tough, and sometimes socially difficult adjustments. Poland and Germany should stress the need for solidarity with the Eastern neighbours. The likely on-going pressure from Russia may considerably impair their national economies and stir up domestic political unrest. The EU has to make sure that closer relations with the EU do not become detrimental to the national interests of the Eastern neighbours. If the association with the EU is a source of problems for the respective countries, it is the EU that will be blamed. Therefore we must offer them concrete assistance drawing upon EU instruments and structures, especially in case of a continued campaign by Russia. Opening EU markets to products that may be subject to new Russian import restrictions would be an important measure. The EU should also consider giving the associated partners access to existing financial instruments or developing a new EaP fund to support the economic transformation and liberalisation process.

Fourthly, Poland and Germany should initiate, strengthen, and support the EU’s efforts to co-operate with the civil society in the EaP countries. The role of national public opinion, non-governmental organisations, and the media in these countries will be instrumental for the implementation of the association agreements. Without domestic pressure on the political elite, the risk of delaying tactics is very high. This is also why the EU should promote the idea of association and launch an information campaign about the benefits of EU integration.

Fifthly, signing the association agreements will advance the common European market and open up European economic integration towards the East. If and once this has been made, the next step could be a new partnership and co-operation agreement with Russia andtalks about an EU-Russia free trade area. Closer contractual relationships between the EU and its Eastern neighbourhood and the EU’s pursuit for closer co-operation with Russia are not contradictory. Poland and Germany would play an important role in this process.

Sixthly, Poland and Germany should work together on a sustainable policy towards the Eastern neighbours by including the Visegrad and Nordic countries in their deliberations. The strengths of the Eastern foreign policy come from a comprehensive approach that involves all stakeholders.

Due to their interests, geography, and history, Poland and Germany are two indispensable nations for the EU Eastern policy. After the EaP summit in Vilnius, the challenges in the Eastern neighbourhood will by no means disappear. On the contrary – whether the summit proves to be a lasting success remains to be seen in the years to come and will largely depend on the EU’s ability to improve its performance in the region. It is time Warsaw and Berlin made the best of their new “partnership for Europe” and take on their responsibility to offer new ideas for the EU’s Eastern policy beyond Vilnius, motivated by a political philosophy of inclusiveness and co-operation.

The memorandum was published in Gazeta Wyborcza and in Die Welt.