Ahead of federal elections, Germany is showing signs of complacency about its economic success, with none of the big candidates addressing the factors that might lead to German manufacturing losing its edge 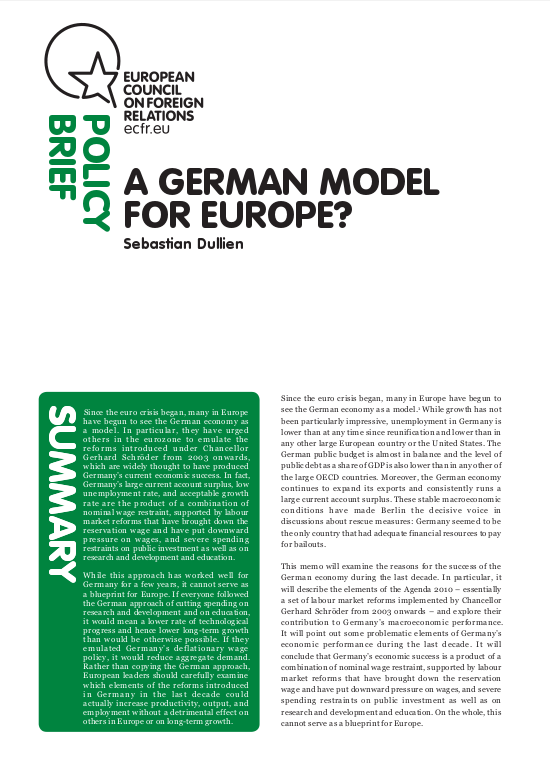 Since the onset of the financial crisis, Germany has found itself envied for its economic success. It boasts one of the continent’s lowest unemployment rates and an almost balanced budget. It is also Europe’s manufacturing powerhouse, with a current account surplus that rivals China’s. But ahead of federal elections there are signs of complacency: manufacturing is in danger of losing its edge, and none of the big political parties are addressing the causes in their election platforms.

Germany’s manufacturing success is a rare combination of good luck and side-effects from past economic reforms. The country has benefited enormously from its historic strengths in capital goods, luxury cars and chemicals exactly matching demand from fast-growing emerging markets. In addition, the labour market reforms of Gerhard Schröder’s government at the start of the century have led to strong wage restraint, increasing the sector’s price competitiveness. Finally, Germany’s success has been helped by the co-operative mood between employers and workers. French manufacturing managers look with envy at how easily their German counterparts can ask their workforce for flexibility over working hours in order to provide for customer wishes and swift after-sales service.

The factors behind these successes are now under pressure. Economic growth in emerging markets has slowed. Beijing is trying to rebalance the Chinese economy from an investment-driven growth model to a consumption-driven one. In Europe, investment remains weak. All this translates into lower demand for German goods abroad.

Meanwhile, one result of the crisis is that wages have been pushed down across Europe, while German wages have slowly been increasing thanks to the low rate of unemployment (especially in the south of the country).

In addition, the foundations for doing business in Germany are deteriorating, increasing costs for companies and making flexibility more difficult. Public spending on education and on research and development as a share of output might not be as dismal as in Italy, but after severe cuts from the mid-1990s onwards, it now trails behind a number of countries that belong to the OECD, the Paris-based club of mostly rich nations, such as Austria, Finland and France. For roughly a decade now, public investment has been lower than the depreciation of public capital.

For a while, these trends were not widely noticed. After the investment boom following reunification in the early 1990s, infrastructure was in a relatively good state. But potholes are increasingly evident on the roads. The recent flooding led to the most important main artery in train traffic from Berlin to the west of the country being closed for the rest of the year, more than doubling the travel time from the capital to Volkswagen’s headquarters in Wolfsburg. When highly qualified engineers spend their time in traffic jams, they are not doing productive work at a client’s site. The problem is amplified by the fact that qualified personnel are increasingly scarce, given the workforce’s rapid ageing.

An increasing number of bridges are closed to heavy loads, and lorries sometimes have to make detours of several hundred kilometres, with one night of transportation easily turning into three. Other parts of the infrastructure are creaking: some of the most important waterways date back to the Kaiser.

All this makes production in Germany increasingly difficult and expensive, and the economic data have begun to reflect this. Productivity measured in output per working hour is now roughly at the level of 2007; such stagnation has not been observed here since the second world war.

In principle, the solution is easy: spend more on infrastructure and stop starving universities and research institutes of funds. Finding money should not be difficult. After years of tax cuts, there is room for slightly higher taxes, especially if the proceeds are put into productivity enhancing investment.

And although Germany has signed up for the EU fiscal compact and included an amendment in its constitution to limit public borrowing, some wiggle room remains. The rules still allow the central government a structural deficit of 0.35 percent of gross domestic product. Using these projected surpluses and the borrowing that is legally possible, one could easily increase public investment by €20bn, or 0.75 percent of GDP, annually.

However, this is not being planned. Instead of using these funds for infrastructure investment, the government plans to run a small but growing surplus in the coming years. And ahead of the elections, both Angela Merkel’s ruling Christian Democrats and the opposition Social Democrats (who strongly emphasise the need for more investment) are campaigning on their so-called fiscal responsibility.

If they follow through with their promises, this might lead to the very outcome they promise to prevent: the burdening of future generations. After all, a few percentage points of less government debt cannot buy the benefits of a world-leading manufacturing sector.

This article first appeared in the Financial Times