Politics and markets don't have much in common, but there is one aspect characteristic for both spheres: As quickly as market actors try to anticipate and assess changing conditions, political actors adjust to new realities. Almost at the speed of light (as Javier Solana would have said in his time as High Representative of the EU) the ‘EU-3’ were washed away as a meaningful term by Brexit. With Britain out, the group of three EU-heavyweights in international crisis management is no more.

Before this had dawned on most observers, the political process had adjusted – German Chancellor Angela Merkel quickly met with French President Francois Hollande and Italian Prime Minister Matteo Renzi. A new trio was born before the Brexit dust had settled, for now not meant to take on international crises but to keep the EU together, and – not least – to contain each other’s ambitions. Knowing that Merkel had to give her best to preserve the integrity of the Union, Hollande and Renzi might have spotted a window of opportunity to harvest some concessions in terms of increased deficit spending at home and/or in Brussels hidden under a grand scheme of relaunching Europe. Thus they were just as eager to seize the moment as Merkel was to control their aspirations.

Germany, it seems, will become even more dominant in a EU without the anti-federalist Britain. This will naturally amplify objections to German dominance from other EU members. Brexit means that governments such as those of The Netherlands, Denmark and Sweden, not to speak of the current PiS-lead government of Poland, are losing their preferred ally in Brussels politics. As a result, their political frustration over the EU and their own role in its processes could grow.

One year after Merkel’s game changing word of welcome to refugees stranded in the Balkans, and one year before the next general elections, the Chancellor has no appetite for surprises.

In turn, this would raise the transaction costs of German EU-policy and make it more difficult for Angela Merkel to deliver on her promise to the German people of keeping the EU together and under her pragmatic control. So while German interest in controlling the trajectory of integration is growing with Brexit, achieving this by way of German heavy-handedness is not an option for the Chancellory. One year after Merkel’s game changing word of welcome to refugees stranded in the Balkans, and one year before the next general elections, the Chancellor has no appetite for surprises. Europe needs to deliver on its strengths rather than on some people’s dreams. And it must stick to its principles in its negotiations with London while also delivering a new deal with the UK that will be palatable to European business interests.

The Bratislava summit takes place against this backdrop. Seen from Berlin, EU governments need a refocusing on the added value of cooperation, and a return to using the EU for problem-solving – on internal and external security, on migration, on economic recovery and growth. While not allergic to historic reference and solemn rhetoric, Merkel and her team do not want the EU to dive into a maelstrom of redesign and relaunch. The German motto for the year ahead calls for under-selling and over-performing from EU leaders and institutions instead of the habitual opposite.

The Chancellor has sensed the risks of Germany's exposed position. For the first time in years she has actively reached out to consult with EU governments, to sound out partners, hear about their reading of the situation, explore common ground and anticipate their positions in the upcoming debates on EU policies and Brexit negotiations. Over the period of one week she met with 15 colleagues from the European Council, and her choice was by no means accidental.

Starting with a meeting of the new trio with France and Italy, Merkel was eager to reach out to the “affluent smaller” member states, who are connected by the policy convergence that open economies, modern industry, and a high standard of living and social security bring about. In this, the Nordics, the Benelux and Austria share many preferences with Germany. In her week of consultations, Merkel met with five of the seven from this group. 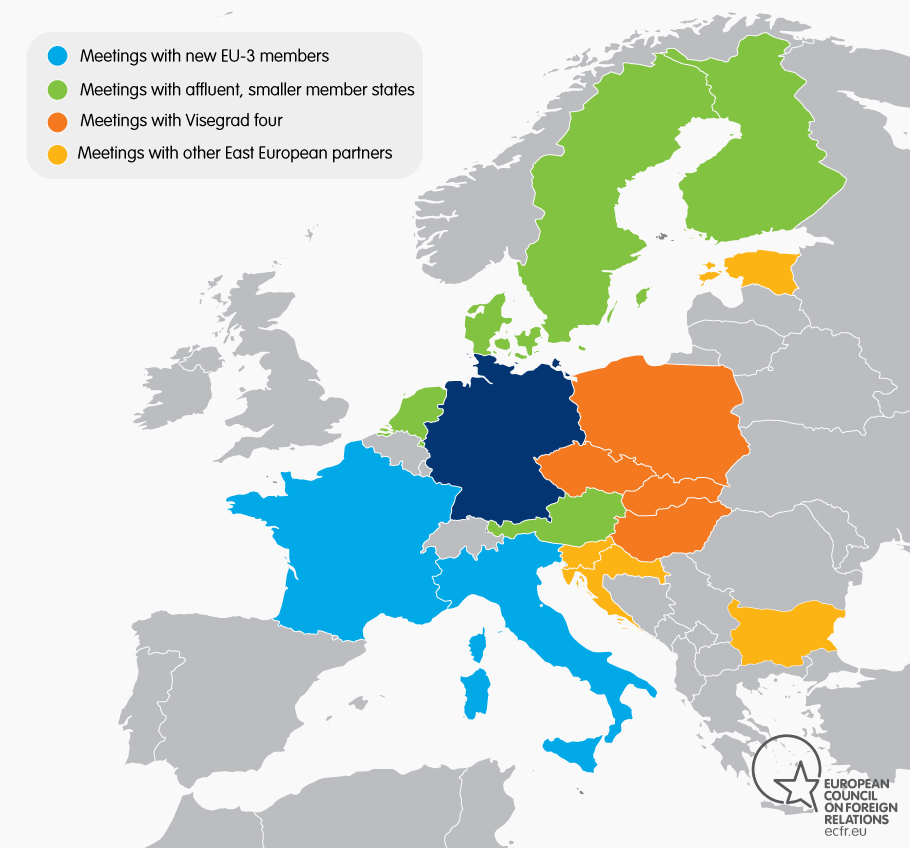 The Chancellor also pointedly included a visit to Warsaw. This allowed her to demonstrate once again that Germany is willing to work closely with Poland and continue that special relationship if and when the Polish government is ready to engage. At the same time, she made sure to pay another visit to Prague, home of the least EU-skeptic government currently among the Visegrad-group, as well as a trip to Estonia’s capital city, Tallinn, to demonstrate in passing that German does not see Poland as the only access point to the EU’s eastern bloc. To complete the picture, Merkel also met with all heads of government of the Visegrad-group, and with her EUCO colleagues from Bulgaria, Croatia and Slovenia.

While the series as such or its exact composition should not be over-estimated, the fact is that the political dynamics within the EU are changing, and Germany is evidently trying to explore alternatives to its unipolar position. Angela Merkel seems to have concluded that the level of political fragmentation in the EU needs to be addressed as it opens spaces for EU-critical political actors within member states to exploit divisions on the community level. The Chancellory will have run the calculations on the future of qualified majority voting in the Council without the UK, showing that matters will become more difficult for the net-payers to the EU budget. Also, winning majorities won't become any easier with the hardening of veto-groups such as the Visegrad countries.

In our last policy brief, Almut Möller and I argued that Europe needs a refocusing on the political centre and on the nurturing of core coalitions among member states. In order to lead, Germany needs a group of ambitious and integration-ready partners engaged in EU affairs across the board. This must be flexible enough in composition and commitment to be more steady than the prevalent ad-hoc constellations. While there would still be room for bi- or trilateral initiatives on specific issues (such as the trio of France, Germany and Italy on crisis management, or Germany and Poland on territorial defence), such a dispersed model would transform the notion of political leadership.

In light of the above, this appears to be an idea whose time has come.