The Intergovernmental Panel on Climate Change recently reminded the world that rising temperatures mean we will all be in very deep trouble this century. But perhaps some will be in less trouble than others.

The northern ice is melting faster than previously thought, and the Arctic could even be ice-free by 2040, meaning the scramble for the top of the globe may accelerate. With new sea routes opening up and oil and gas waiting to be discovered, the biggest winner of this evolving situation is likely to be Russia. Out of all the Arctic countries, it is the one currently exhibiting the greatest determination to benefit from its location, after long centuries of waiting for its northern seas to finally come into play. If other countries – Arctic or otherwise – do not soon back up their strategies with meaningful investment, then they could find themselves left behind in a new race for the North Pole. 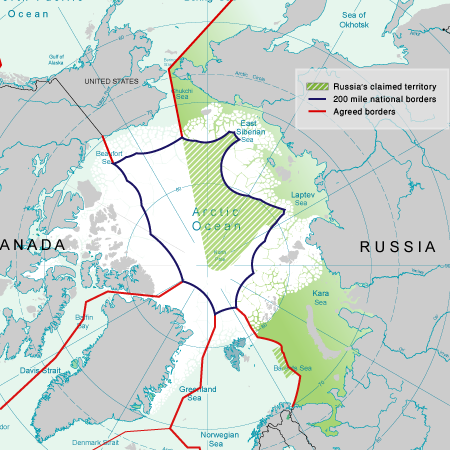 The melting of the Arctic ice will have not only environmental impacts but geopolitical implications too. It will likely reveal enormous oil and gas reserves. And the Northern Sea Route now emerging is a transport corridor with huge commercial and military potential, shortening the route from Asia to Europe by 35-40% in comparison with the route via the Indian Ocean and the Suez Canal.

Few investors are currently looking for new resources very far north but as the ice melts, more and more energy companies are considering their options. Meanwhile, just this summer Venta Maersk became the first commercial container ship to complete a successful trip from Vladivostok to St Petersburg along the Northern Sea Route. Earlier in the year, Russian gas company Novatek shipped a cargo of LNG to China, taking just 19 days instead of the usual 35 that the Suez route takes. Navigable seas mean that Russia can export its own LNG much more easily and thus unlock supplies from its remote Siberian fields. This in itself is an immense economic opportunity for Moscow.

Climate change also means that the navigation period is getting longer. And for colder times Russia has an impressive fleet at its disposal: 40 icebreakers, including nuclear ones. Nuclear icebreakers are superior to their diesel-powered counterparts: they can cut through much thicker ice and are easier to manage as they do not need refuelling in the inaccessible north.

Even if Russia does not win rights to the extra Arctic territories it is claiming, it will still oversee the Northern Sea Route

Russia is not alone in the Arctic, of course. The United States, Canada, Norway, Denmark, Sweden, Finland, and Iceland all have territory that lies within the Arctic Circle. Yet other countries beyond these would like a piece of the pie, arguing that the Arctic belongs to nobody and that it is a “global commons”. China – nowhere near the Arctic – declared its intention of becoming a “polar superpower” in 2014. In 2018 it issued its Arctic Policy, in which it vows to pursue its interests in the region. China is now investing in its fleet of icebreakers and intends to cooperate to build a “polar silk road”.

This has led to comparisons with the 19th century Great Game in central Asia. The analogy is perhaps inevitable, but it is not quite accurate. The Arctic is regulated by treaties to a large extent, especially the 1982 United Nations Convention on the Law of the Sea (UNCLOS). This goes into great detail on delimiting territorial seas, economic zones, and the right of transit passage. And the Arctic Council comprises countries and indigenous peoples of the Arctic. The council works on sustainable development and environmental protection and is an important platform for dialogue and peaceful cooperation in the Arctic. However, its mandate explicitly excludes military security.

Meanwhile, UNCLOS is, of course, open to interpretation, leading to border disputes. For example, the definition of ‘continental shelf’ lies at the heart of the dispute over the 1,800km-long Lomonosov ridge, believed to be particularly rich in oil and gas. Russia is determined to secure the rights to the ridge. The Arktika 2007 research expedition made headlines when Russia tried to prove its case: expedition scientists claimed that the crust structure of the Lomonosov ridge corresponds to the adjacent – Russian – continental shelf.

Canada and Denmark both oppose the claim, with Denmark aiming to prove that the Lomonosov ridge is an extension of Greenland. The UN is unlikely to solve this dispute any time soon: Russia has been manoeuvring on this front for a while. In 2012, Russian scientists suggested renaming the Arctic Ocean “the Russian Ocean”. Five years before that, Arktika 2007 undertook a dangerous diving mission to the North Pole seabed where it planted the Russian flag on the Lomonosov ridge. Importantly, Russia is building up its Arctic military presence, creating new Arctic brigades, establishing an Arctic Joint Strategic Command, and restoring cold war-era airports. The Arctic region remains one of Russia’s main strategic priorities, as is clear from its Arctic Strategy announced by Vladimir Putin in 2013 and 2008.

Other Arctic nations have their own strategies for the region. They put a lot of emphasis on sustainable development, environmental protection, the rights of indigenous populations and peaceful conflict resolution.  The military component is much less visible, and they also invest less in infrastructure that helps access the north. While icebreakers are a vital instrument in accessing much of the Arctic, paving the highways of the Arctic, the US possesses only two. Barack Obama called for more icebreakers, but results are yet to be seen. Acquiring new ships of this type is not easy, as each costs about $1 billion and takes 10 years to build. Meanwhile, Putin behaves in a proprietorial way over the region, most recently inviting India to join its Arctic projects.

Even if Russia does not win rights to the extra Arctic territories it is claiming, it will still oversee the Northern Sea Route and capitalise on increased traffic in the Arctic. Russia has already set up the Northern Sea Route administration, which is a federal budgetary institution giving permits to navigate the route and assisting with icebreakers and ice pilotage. As well as being much shorter than the alternatives, this route is also deeper, meaning that ships can carry more cargo. The other northern route – the Northwest Passage off Canada’s coast – is not as attractive, as the waters there are shallow. Moreover, shipping there will be complicated by contested sovereignty claims over these waters.

In recent years, one has become used to saying that Russia has a strategy for everything: a strategy for its western neighbourhood, strategy for Eurasia, strategy for destabilising and dividing Europe. While Russia is very active on many fronts, it is not always successful at achieving its aims and the word “strategy” is often an exaggeration. The country is not omnipotent and it does not have the resources to deal with every issue on its borders.

However, Russia does have a long-term, viable strategy for the Arctic that it started to pursue before others fully grasped the region’s strategic importance. Importantly, Russia has the tools and the infrastructure it needs to work in the harsh conditions in the north. It will be difficult for others to catch up when Russia has this headstart.

Other countries should prepare for Russia continuing to want more than it receives under UNCLOS. Given its strong interest in the Lomonosov ridge, the military changes it is making in the Arctic, and its wider drive to influence the shape of the world order, it is not unimaginable that Russia may simply move in to begin exploiting the Lomonosov ridge, creating a fait accompli that only other major powers could undo. At the moment it is not clear who would wish to confront Russia in this way, or even whether they have the full complement of strategy, skills, and technology to do so.