Last week, a moment that Saudi Crown Prince Mohammad bin Salman had long awaited finally arrived: state-owned energy major Saudi Aramco launched an initial public offering (IPO). Yet the move was less ambitious than originally planned. For the time being, the company will only be listed on the local stock exchange, Tadawul. The widely discussed international portion of the operation – opposed by some within the royal family – has been postponed again. There remain concerns about opening the books of Saudi Arabia’s most important company to intense scrutiny, as well as irremediably reversing a decades-long nationalisation process of which Saudis are proud.

However, this domestic IPO still somewhat addresses Mohammad bin Salman’s priorities: raising capital for the Public Investment Fund to support Vision 2030 economic diversification initiatives; and consolidating his decision-making model based on a “can do” mentality, in spite of established traditions. On a more strategic level, the operation is symbolically important as an attempt to turn the page on a narrative on Saudi Arabia that has prevailed since the attacks against Aramco infrastructure at Abqaiq and Khurais in September 2019: that the country’s assertive Iran policies have backfired and left it more vulnerable, including its economic crown jewel. Riyadh is making a serious attempt to address this sense of vulnerability.

Before September, few in Riyadh expected that the Islamic Revolutionary Guard Corps would orchestrate or support a direct attack against key Saudi oil infrastructure – as alleged by Saudi Arabia itself, the United States, and the E3. Given that Saudi Arabia’s relations with the United States had markedly improved under the administration of Donald Trump, Saudi leaders expected that they could count on the efficacy of US military deterrence. If they were shocked by the fact that said deterrence did not deter, they were even more concerned that the White House’s reaction was to lead from behind, leaving Saudi Arabia to take charge.

As Saudi Arabia would never initiate a formal escalation or rise in tensions into a full-blown conflict with Iran, Riyadh formally resorted to a narrative of strategic patience, endorsing further US sanctions and insisting that economic pressure would bring Iran back to the negotiating table from a position of weakness. At the same time, the September attack rang alarm bells: betting so much on the non-interventionist Trump to confront Iran could be counterproductive. Some in Riyadh calculate that Trump, already focused on re-election, might try to cut a hasty deal with the Iranians to boost his standing at home, thereby ignoring Saudi priorities. In this context, Riyadh’s primary aim is to avoid further attacks.

Thus, Saudi Arabia, actively seeks either de-escalation or a halt to the rise in tensions. Riyadh has responded to conciliatory messages by Tehran via the Pakistani prime minister, Imran Khan. The assumption is that there is unlikely to be another attack while attempts at dialogue continue. Saudi Arabia has been more responsive than usual to renewed Kuwaiti and US calls for progress towards the resolution of the dispute with Qatar that began in 2017.

Some in Riyadh calculate that Trump might try to cut a hasty deal with the Iranians.

Saudi Arabia has seized the opportunity to re-open direct talks with the Iran-backed Houthi rebels in Yemen – who are scared that they will be scapegoated for the Saudi Aramco attacks and subjected to international retaliation. Riyadh has also actively mediated – with the support of Abu Dhabi – an agreement between Yemen’s Southern Transitional Council and the government of Abd Rabbu Mansour Hadi that might prevent the outbreak of a civil war within a civil war in Yemen, at least for the time being.

While this less adventurist trend began in late 2018 – when members of the old guard such as Minister of State Musaib al-Aiban regained key positions Saudi government, in the aftermath of Jamal Khashoggi’s murder – it has accelerated in the past two months. Many of these developments appear to be tactical rather than strategic, but Europeans should take this chance to try to push Gulf players one step forward in the very long and tortuous process of establishing a sustainable détente.

Saudi Arabia has not formally refused to discuss French President Emmanuel Macron’s initiative to revive the Iran nuclear deal, which factors in Gulf Arab states’ concerns about Iranian ballistic missiles and regional policy. This month, the Saudi Ministry of Foreign Affairs announced that it was working on a strategic partnership framework with France. Mohammad bin Salman has recently been communicating directly with Macron.

But Macron’s initiative has limitations. Firstly, while it privately has the support of Germany and a few other European capitals, the plan is highly personalised at this stage, which might leave it with less diplomatic fuel than it needs to fly. Secondly, the extent to which the US will support the initiative remains unknown. Finally, and most importantly, Iran would not be sitting at the table in a position of weakness and compromise, something which has been a consistent goal for the Saudis.

Indeed, Riyadh accepts that diplomacy and negotiations are the only sustainable way forward for regional powers, if they are to coexist in a shifting geopolitical reality. However, because the timing, context, and structural conditions of such negotiations will determine Saudi Arabia’s future position in any regional arrangement, these three factors are of huge importance to the Saudis.

For this reason, Riyadh is not ready for regional security talks. If the Europeans, under French leadership, want to achieve more permanent results – beyond tactical manoeuvres – they ought to narrow their focus to some of the regional issues on which Riyadh and Tehran oppose each other, directly or indirectly. Europeans should work towards achieving a geopolitically balanced and sustainable solution on the ground. This would not only be more realistic than Marcon’s initiative, but could also lay important groundwork for future international talks on Iran’s role in the region. 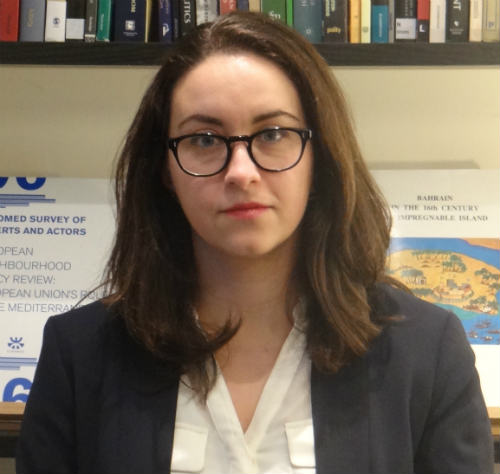