Since joining the European Union, Romania has put considerable effort into promoting European values and fostering its pro-European ambitions. The core symbol of the country’s pro-EU orientation was its inspiring fight against corruption: in the last five years, Romanian anti-corruption authorities successfully convicted several thousand people in politics, ranging across all the major parties and from the top to the bottom of Romanian politics – ministers, members of parliament, mayors, major party figures. The EU gave its full backing to this anti-corruption drive, which was led by now-former National Anticorruption Directorate chief Laura Codruta Kovesi. But the political will to tackle corruption at the highest level of politics slowly but surely began to fade two years ago, with the electoral success of the Social Democratic Party (PSD).

This year, the PSD government began pressuring the Romanian judiciary and anti-corruption authorities in a manner reminiscent of its counterparts in Poland and Hungary. Watching and learning from those countries’ governments, it declared anti-corruption authorities “politically motivated” and accused prosecutors of a “political witch hunt.” It proposed a number of bills which would introduce significant changes to decriminalize certain corruption offences, increase the burden of proof, and reduce prison sentences for politicians. The government has also engaged in aggressive rhetoric against individual judicial figures and prosecutors involved in corruption cases which revolve around PSD members. Romania’s newfound vigour for examining “judicial independence” has emerged to the backdrop of numerous PSD members finding themselves under investigation for corruption and abuse of power, including the leader of the PSD himself, Liviu Dragnea, who already has one preliminary conviction for abuse of office to his name.

In response, the last several months alone have seen the EU issue several warnings to Romania, castigating the government for its infringement of democratic standards and values. The government, meanwhile, insists that the EU’s reactions to its changes to the judiciary are “unfair” and “politicized”.

This controversy comes at a time of strategic importance for the country, as it prepares to assume the presidency of the Council of the EU. A “Europe of common values” is one of the stated topics of Romania’s presidency, but recent developments are likely to exert a negative impact on perceptions of Romania’s presidential term right across the EU.

The results of ECFR’s 2018 EU Coalition Explorer indicate that Romania’s six months of presidency is indeed an opportunity that it cannot afford to squander. But the research among policy professionals active in European diplomacy reveals that the country has failed to position itself as a reference point for European policy matters in the bloc – and specifically among member states that it presumes to be its own key partners. Analysis of the strength of networks between different EU members show that Romania is a generally poorly-connected member state. For example, insiders divulge that Romania regularly reaches out to the large member states but that it gets little-to-no response back. It enjoys some reciprocity in its relations with Bulgaria and – to a lesser degree – with Poland. But these are not balanced, and a fairly strong asymmetry exists with both countries. Similarly, few believe that Romania exerts any great influence on EU policies. This year’s EU Coalition Explorer data show that the country has failed to position itself as a reliable partner or leader across the majority of policy areas over the last two years. 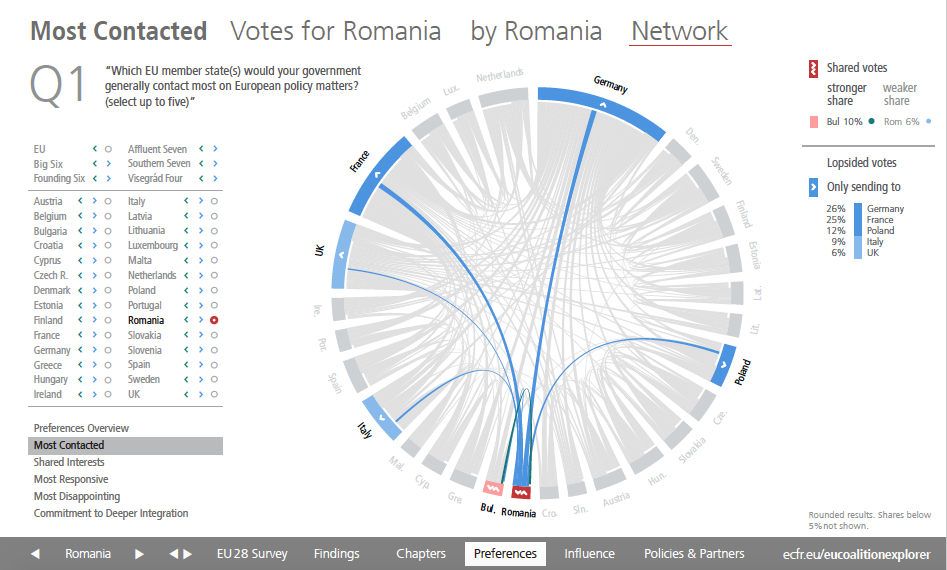 These findings suggest that Romania should seize the opportunity of the EU Council presidency to build trust and influence in the bloc. Next year, perhaps more than most, is one which will define the future of the European project: growing security threats in the east, Brexit, and the European Parliament election will all present their own difficult challenges.

Instead of wasting political capital and goodwill on reversing its own progress on corruption, Romania would do well to focus its political energy into clearly articulating its positions on matters of importance to the country, such as: the future multiannual financial framework and policy/spending priorities within the framework; and the security and defense policy of the bloc, not least in the country’s own Black Sea neighborhood. The government would find hands willing to help on this sort of agenda: Romanian participants in the Coalition Explorer cite three foreign policy issues as their top EU priorities over the coming years. These are: an integrated foreign policy; a common Russia policy, and common defense. There is a clear opportunity to align domestic and EU-level interest on these issues.

Romania’s 2019 presidency offers a significant opportunity – and a challenge too. It could represent a real turning point after months of worsening relations between Bucharest and Brussels. For the good of its country, the Romanian government urgently needs to find the political acumen to prioritize medium-term and long-term national benefit over short-term party gains.

Luka Orešković is an associate fellow at the Institute for Quantitative Social Science at Harvard University, and has served on the economic council of the president of Croatia. He has been an associate researcher at ECFR since 2013.

The gulf between them: What Arab Gulf countries can learn from Iran’s approach to Iraq