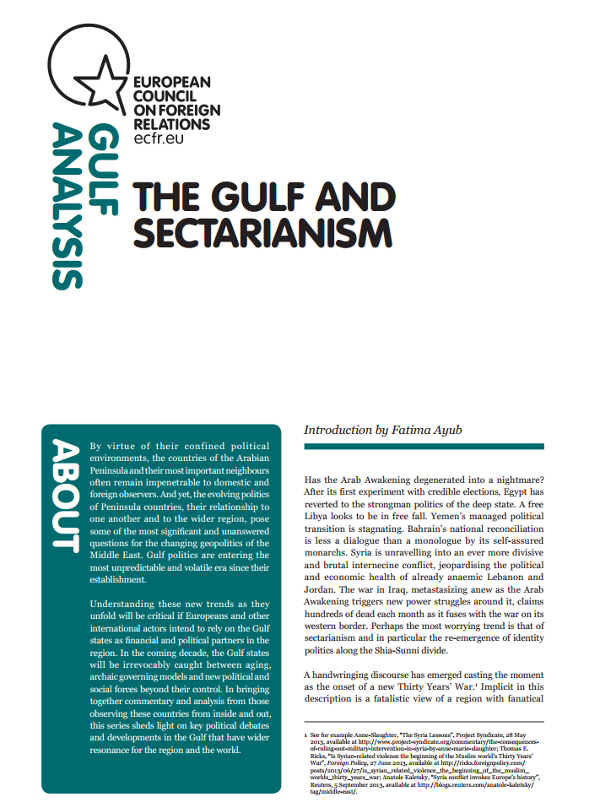 Events in the Middle East and North Africa (MENA) continue to take an unpredictable turn. In particular, the continued souring of relations between the US and Saudi Arabia – long key allies in the region – has the potential to radically reshape local geopolitical dynamics. The renewal of military ties between Russia and Egypt (inconceivable without Saudi support and financing), and talk of closer co-operation between Saudi Arabia and Israel over Iran, are both a case in point.

The main point of contention between Riyadh and Washington is the apparent easing of US-Iranian tensions. Isolating Iran and rolling back its influence in the region – in Lebanon, Syria, Iraq, Palestine, and elsewhere – remain paramount for Riyadh, whose policy choices are driven by a combination of classic regional balance of power politics overlaid with Sunni-Shia sectarian tensions.

Saudi Arabia has also made no secret of its disappointment over US policy in Syria and Egypt (and for different reasons in Palestine), interpreting both as further evidence of Washington’s unreliability as an ally especially in times of need. Even if no rapprochement materialises between the US and Iran, it remains doubtful whether US-Saudi relations will return to normal.

While it is true that disagreements between the US and Saudi Arabia are nothing new, what makes things different this time around is not only the inclusion of Iran, a clear “red line” for Saudi Arabia, but also the vastly changed regional context in which their disagreements are being played out. Greater regional instability adds a measure of unpredictability previously unseen and only heightens the possibility that actions will lead to unintended consequences.

Until now, no single organising principle or strategic framework exists that can explain the many changes currently transforming the region. Not one regional actor or outside power appears strong enough to dictate the pace or direction of change, while pronouncements of a new era dominated by Sunni-Shia tensions gloss over a number of other dynamics pushing and pulling the region in different directions. These include more traditional state-to-state rivalries and balance of power politics, the re-emergence of powerful civil society actors organised around novel forms of civic mobilisation and engagement, the rise of political Islam as a force to be reckoned with (or suppressed), and the continued proliferation of rival non-state actors.

What the Arab uprisings have affirmed, however, is the declining influence of outside powers in the region, coupled with the growing importance of local actors in shaping regional dynamics. The last decade in particular has seen Turkey and Saudi Arabia emerge alongside Iran as regional heavyweights capable of mobilising substantial state resources to project power and influence across the MENA (with Egypt poised to join their ranks depending on domestic developments). This includes providing financial and military aid to allies in the region.

What they also unleashed were more complex and fragile balance of power arrangements as different actors jostle for power. Particularly in a region that has largely bucked the trend towards greater integration and security co-operation, coalition building around shared strategic interests takes on added importance. As the fault lines of Saudi-Iranian rivalry continue to restructure the region, however, these coalitions are becoming more defined in scope. Both Saudi Arabia and Iran are powerful enough, and their enmity strong enough, to drag the region into a prolonged period of polarisation and brinkmanship. Replete with rising sectarian tensions, this is a worse case scenario for MENA.

While the mutual importance of their relationship makes the possibility of a decisive break between Washington and Riyadh highly unlikely, the policy decisions that Saudi Arabia makes have the potential to impact the entire region. Not waiting to see how negotiations over Iran’s nuclear programme pan out, it has already sent a volley of warning shots across America’s bow.

The possibility of closer Saudi-Israeli co-operation over Iran is one option that looks increasingly plausible. Both countries have found common cause in their dismay over Washington’s recent overtures towards Tehran. Neither wishes to see Iran brought in from the cold.

Intended to convey the extent of their displeasure at the US, and to apply pressure aimed at complicating current negotiations with Iran, media reports over the weekend claiming that Saudi Arabia and Israel have been working together on contingency plans to attack Iran should P5+1 talks fail to curb its nuclear programme will only further fuel speculation over a deepening of ties between the two countries.

It is highly unlikely that either Saudi Arabia or Israel will act independently of the US on Iran. Nor is it likely that a deepening of Saudi-Israeli relations, if it materialises, will extend much beyond increased co-operation and co-ordinated messaging on Iran. No new and powerful alliance is in the making. It is worth pointing out, however, that both countries share a number of common strategic concerns. Both seek to isolate and weaken Hezbollah in Lebanon and are also in favour of some sort of military strike against the Assad regime in Syria, though differences remain over whether to topple the regime or not (while Israel’s overriding concern has been to neutralise any possible military threat posed by Syria, including from chemical weapons, fears over who might succeed Bashar al-Assad have tempered any enthusiasm regarding his possible overthrow).

Throwing a lifeline to Russia?

For Russia, the news has gone from bad to worse since the start of the Arab uprisings. In the case of Libya, a UN-imposed arms embargo and the overthrow of Muammar al-Gaddafi is estimated to have cost Moscow some $4 billion in lost arms contracts. In Syria, its interests hang precariously in the balance, including lucrative arms deals, substantial oil and gas interests (including the protection of Russia’s natural gas exports to Europe), and its naval base in the port city of Tartus, which provides the Russian navy with its only direct access to the Mediterranean. This has all happened at a time when US-Russian rivalry over access and influence in the region has noticeably intensified.

The prospect of renewed military ties with Egypt has the potential to throw Moscow a much-needed lifeline in the region. For such relations to progress, Saudi financing and support will be crucial. Beyond enhancing Egypt’s military capabilities and strengthening its hand against the Muslim Brotherhood, Riyadh’s interest also lies in trying to weaken recent Russian-Iranian co-operation over Syria. Closer military ties between Egypt and Russia also promise to boost Moscow’s presence in the region, directly at the expense of the US given the latter’s decision to cut its military aid to Egypt (a decision criticised by Saudi Arabia). Such a development has surely not been lost on Riyadh.

What of the Middle East Peace Process?

If the Arab uprisings reinforced the limits of US power and influence in the region, Washington wasted little time in reasserting its authority over the Middle East Peace Process (MEPP). For good reason, many fear that a third Palestinian intifada will greatly exacerbate regional instability and possibly lead to a wider confrontation involving Israel. The wisdom of re-launching MEPP as a way to avoid (rather than encourage) such an outcome is debateable. What is certain, however, is that unless some sort of progress is made, the potential for confrontation will only increase.

With the prospect of an agreement on final status issues such as borders, Jerusalem, settlements, and refugees not even remotely likely, we should expect some sort of interim arrangement that all parties can sell to their respective constituencies (if it can first get past Israel’s coalition government) – most likely a Palestinian state with provisional borders (Phase II of the Roadmap), including some transfer of land in the West Bank from Area B to A, coupled with an agreement to hold final status negotiations at a specified date in the future. While presented as a historic breakthrough, it would largely spell disaster for Palestinians.

How Saudi Arabia responds will be particularly crucial. Having consented to return to negotiations against the wishes of both his own party, Fatah, as well as the PLO Executive Committee, President Mahmoud Abbas cannot sign any agreement, interim or otherwise, without the support of both Saudi Arabia and Egypt. Saudi Arabia could conceivably withhold its support as a reminder to the US of Riyadh’s importance in the region. Such a move, however, would only embolden Hamas, whom Saudi Arabia readily equates with the Muslim Brotherhood.

Instead, we could conceivably witness a convergence of US-Saudi-Israeli interests around some sort of interim arrangement described above. For Saudi Arabia, agreement on a Palestinian state with provisional borders would be seen as a way of boosting President Abbas’ standing against that of Hamas, as well as avoiding greater regional instability. The same could be said for the US, with the additional promise of partly restoring its diplomatic presence in the region. For its part, Israel may come to view some sort of interim agreement as providing a path towards greater regional co-ordination over Iran and possibly other areas. Whatever the outcome, the road ahead looks anything but assured.