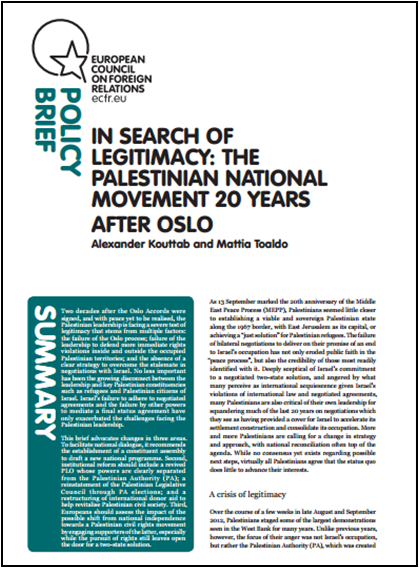 The last two decades of bilateral negotiations absent a final peace agreement have placed an enormous strain on Palestinian politics and society. If it is still possible to speak of a Palestinian national consensus in support of negotiations, it is fast disappearing. More and more Palestinians are instead calling for a change in strategy and approach. Such calls have a direct bearing on the Middle East Peace Process (MEPP), which neither the Palestinian leadership nor the European Union as a key sponsor and supporter of the MEPP can afford to ignore.

Despite all the interim agreements and promises made over the last 20 years, Palestinians are little closer to achieving their core strategic objectives, loosely defined as an end to Israel’s occupation, self-determination, and a “just solution” for Palestinian refugees. Nor has the situation on the ground in the Occupied Palestinian Territories (OPTs) substantially improved.

For many Palestinians, life has become harder – a far cry from the promised dividends of peace. Movement restrictions and closure have become the norm. Social inequalities have grown, poverty rates remain high, and dependency on aid has soared. The strong social bonds that once supported Palestinians through the harshest periods of occupation have largely disappeared, replaced by a rampant individualism at odds with the fragile economic situation most now find themselves in. Many now warn of the diminishing prospects for Palestinian statehood given the pace of Israeli settlement construction over the last two decades, while the bitter political divide between Fatah and Hamas continues to weaken the ability of either party to mount an effective political response to the many challenges Palestinians face.

The failure of bilateral negotiations has not only eroded public faith in the MEPP but has also hurt the credibility of the Palestinian leadership, which has consistently aligned itself with them. While a slim majority of Palestinians living in the OPTs continue to support a two-state solution, recent polls conducted by the Palestinian Center for Policy and Survey Research show that most believe it is no longer practical given the extensive presence of Israeli settlements. Less than a third view the Palestinian Authority (PA) positively, while only 31 percent in the West Bank, and 36 percent in the Gaza Strip evaluate their current conditions favourably. Fewer still are optimistic about the future, or Israel’s long-term intentions.

More than a loss of faith in negotiations, these statistics speak to a crisis of confidence in the very institutions and decision-making most closely associated with them. They highlight the extent to which Palestinian disenchantment goes beyond criticism of any individual or particular decision to include the political status quo in place since 1993.

The progressive marginalisation of Palestinians living outside of the OPTs from any meaningful form of engagement in political decision-making over the last 20 years has only exacerbated the sense of disconnect that increasingly exists between ordinary Palestinians and the political structures that represent them. Since 1993, decision-making has progressively become concentrated in the hands of a few, with de facto political power shifting from the Palestinian Liberation Organization (PLO) to the PA, and more recently, to the president’s office. This has significantly eroded whatever avenues were once open for Palestinians to influence key political decisions, particularly within the PLO. In concert with this, Palestinian political demands have narrowed to an almost exclusive focus on state building and the more immediate challenges associated with “self-rule” under occupation (with all other issues indefinitely deferred until permanent status negotiations).

The signs of a growing crisis of confidence in the political status quo are hard to miss. Across the various forums, websites, and publications that are a staple of Palestinian political life both inside and outside the OPTs, many Palestinians are calling for a return to the drawing board and a reassessment of national strategies and goals. Options being promoted include far reaching reforms to the PLO, new elections for the Palestine National Council, and even the dismantlement of the PA. These are not cosmetic changes. Nor were the demands of protestors involved in anti-government demonstrations held in Ramallah last September, which included calls for senior political figures to resign and for the PLO to walk away from the Oslo Accords altogether.

Increasingly so, these calls highlight a groundswell of changing political attitudes and sensibilities among a growing number of Palestinians. This extends beyond one-state/two-state conversations to include a focus on rights per se, debates over how best to define Israel’s occupation and which body of international law best applies, and calls for a return to community activism and non-violent resistance. Any national consensus or mandate in support of negotiations is fast disappearing.

Without a change in the status quo, the Palestinian leadership faces some hard choices. Two areas in particular stand out. First, the leadership should consider initiating a new Palestinian national dialogue aimed at revitalising a weakened Palestinian national movement. Given that debates over Palestinian strategy are already taking place, the leadership is better served by being part of them and staying ahead of the curve rather than finding itself one of their principal targets. While not risk free, helping to facilitate such a debate in a structured and inclusive environment that allows for the participation of key Palestinian constituencies will serve as a show of national leadership and help Ramallah reconnect with those whom it has largely lost touch with, particularly Palestinian refugees. One option – more viable than most – is the creation of a constituent assembly charged with drafting a new national programme capable of reunifying the Palestinian body politic around an agreed set of national goals and strategy.

Second, the Palestinian leadership should prioritise much needed institutional reforms to allow for greater democratic decision-making. Such reforms should start with the renewal of the PLO, whose role and responsibilities as the sole legitimate representative of all Palestinians should be clearly separated from those of the PA. Changes in PLO funding, as well as a review of its charter to strengthen internal democratic procedures, should also be considered. In addition, staging new elections for the PA and reviving the Palestinian Legislative Council will provide additional legislative oversight over executive decisions in the OPTs. PA elections, however, should not be treated as a panacea for all of the problems facing the Palestinian leadership. Lastly, strengthening Palestinian civil society and fostering greater public policy dialogue and debate are both important in strengthening public participation and representation in the OPTs.

The EU and its member states should encourage and support progress on both fronts. Mindful of the lessons learned following the EU and US boycott of the Hamas-led government in 2006, this includes helping to support a new Palestinian national dialogue and encouraging other countries with similar experiences to do so as well. The EU and its member states should also observe and reinforce the division between the PLO and PA in all of its respective dealings with both institutions, while the staging of successful PA elections will require strong EU support and no small amount of diplomatic muscle to ensure that Israel allows voting to take place across the OPTs. Additionally, the EU should concentrate its efforts more squarely on promoting greater public policy dialogue, as well as restructuring EU funding to empower rather than emasculate Palestinian civil society organisations in the OPTs.

Lastly, the EU should assess the impact of a possible shift in Palestinian political strategy as more and more Palestinians call for change. This means engaging more seriously with those who prioritise a struggle based on rights, without necessarily equating this to Palestinian independence alone. Recent history shows that both their organisational capacity and popular support look likely to grow. This could lead to the gradual marginalisation of political institutions traditionally devoted to two-state negotiations with Israel and leave traditional interlocutors of the EU with diminished clout while new actors gain traction. The EU and its members would thus do well to engage these actors early on while the pursuit of rights still leaves open the door for a two-state solution.

The resumption of US-sponsored Palestinian-Israeli negotiations should not be used to indefinitely delay such measures, even if they introduce certain sensitivities in terms of timing. While the OPTs remain relatively quiet, the situation on the ground remains brittle. A number of factors exist that could push them over the edge – the fiscal crisis facing the PA; continued settlement construction; increasing settler violence; and a combustible regional environment to name but a few. Against this backdrop, growing public disaffection conditioned by a loss of faith in negotiations only adds dry tinder to an already combustible situation.

Hedge politics: Turkey’s search for balance in the Middle East