Since US President Donald Trump met his Russian counterpart, Vladimir Putin, in Helsinki last month, there has been a steady drumbeat of speculation about the subject of their private discussions. It now seems that Putin floated the idea of organising a referendum in Donbas to resolve the crisis resulting from Russia’s invasion of eastern Ukraine, which followed its annexation of Crimea in spring 2014. There are unconfirmed reports that, in response, Trump asked Putin not to go public with the idea so that he would have time to consider it. Yet Putin’s apparent proposal is fundamentally flawed.

There is a positive aspect to the idea: Putin seems to have demonstrated an awareness of the need to seek an exit from the Donbas morass his imperial “Novorossiya” fantasy created. After having been forced to intervene with regular Russian forces to prevent the collapse of his destabilisation scheme in eastern Ukraine, he is now stuck with the Donetsk and Luhansk pseudo-statelets there, which depend on Kremlin support in virtually every respect. The venture has become a political embarrassment, an economic burden, and a huge obstacle to Russia’s foreign policy ambitions.

Putin previously aired the idea of a UN peacekeeping mission in eastern Ukraine, but it transpired that he wanted the force to be little more than a team of bodyguards for a weak Organization for Security and Co-operation in Europe observer mission. The plan had very little to do with implementing the Minsk agreement and resolving the crisis. The same is likely true of a referendum.

Of course, the main problem with the idea concerns the question such a referendum would ask. The Crimea referendum asked whether the peninsula should become part of Russia. Putin has repeatedly said that this is not what he seeks in Donbas, but it remains unclear whether he will maintain this position.

If joining Russia would not be on the ballot paper, and the creation of an independent state is another non-starter, it is reasonable to assume that Putin would want a Donbas referendum to focus on some sort of autonomy for the region. Indeed, various Russian spokespersons on the issue have often repeated this theme. After initially referring to vague concepts of a federalised Ukraine, they seem to have adopted “autonomy” as their preferred term.

This autonomy appears to go far beyond the Minsk agreement’s provision for “temporary procedure for the organization of local self-government, activities of local government bodies in certain districts of the Donetsk and Luhansk regions”. If autonomy is to be the focus of a Donbas referendum, the concept must be clearly defined. As Ukraine has already implemented far-reaching reforms that provide substantial autonomy to all its local authorities, it is hard to see what new form of autonomy could significantly improve on this.

Putin’s apparent idea for a referendum is fraught with complications

Some thinkers within the Kremlin may dream of a Donbas whose foreign and security policy orientation is independent of Ukraine’s. If so, they should look at themselves in the mirror: Russia is a federation that does not provide such rights to any of its constituent regions. Nor does any other European country.

Budgetary issues are also critical to a referendum in Donbas. The region’s economy was highly dependent on de facto subsidies from Kyiv prior to the conflict, and its needs will be even greater now.

Reviving the economy will hardly be possible if it remains separated from that of wider Ukraine. Moreover, it is unlikely that Putin would allow Donbas to fall under the extensive trade agreement between the European Union and Ukraine, even though this would be both economically necessary and logical.

Putin probably aims to separate Donbas from Ukraine’s economy and draw it into his Eurasian Economic Union. Such a move would not only be incompatible with the territorial integrity of the country but would also face resistance from key economic actors in the region, who have vehemently opposed such a move in the past.

Given these challenges, Putin’s apparent idea for a referendum is fraught with complications. And there is also the issue of which authority would oversee such a vote. (Putin would likely prefer that Kremlin-backed rebel leaders did so but, for obvious reasons, other sides in the conflict would reject this approach.) Added together, these difficulties suggest that deciding what question to put on the referendum ballot would be as difficult as resolving the conflict itself.

Another problem – in the somewhat unlikely event that the others could be resolved – concerns who would be allowed to vote in the referendum. Putin would likely want only people living in areas under the authority of the Donbas rebels to participate in such a vote. According to UN estimates, around 2.8 million people inhabit this part of Ukraine.

In April 2014, prior to the onset of the conflict, the population of Donbas was much larger. The war there has internally displaced around 1.7 million people, some of whom now live in parts of Donetsk and Luhansk that Kyiv controls. There are also a significant number of refugees from Donbas in Russia, as well as other countries.

It would be utterly unacceptable to hold a referendum that denied all these citizens of Donetsk and Luhansk the right to vote. Such a referendum would sanction a limited group’s takeover of the area. Thus, it would be easier to use an old electoral register to identify referendum voters than to set up an entirely new one.

Conducting a referendum in this way – allowing refugees and internally displaced persons to engage in absentee voting – is complicated but by no means impossible. The international community used this approach when implementing the peace agreement in Bosnia. Yet applying this method to Donbas would require an international organisation to run the process as a whole.

Finally, it is unclear whether a referendum in Donbas would solve the region’s basic problems with governance and control. In all likelihood, it would not.

The Minsk agreement is far from perfect, straightforward, or logical in its structure. Its February 2015 iteration is evidently the product of a very long and difficult night of negotiations. Yet the essence of the agreement still appears to provide the only viable path forward. It lays the groundwork for not a referendum but rather an election – an election that would allow the people of the Donetsk and Luhansk regions to choose leaders who would then negotiate on decentralisation or autonomy with Kyiv.

Organising an election would undoubtedly be challenging, as it would require the international community’s direct involvement and a lengthy, strenuous effort to establish a free and fair voting environment. But this approach still appears to be far more realistic than the strange detour of Putin’s apparent referendum idea.

One of the EU’s highest political priorities should be to end the war in Donbas, which is by far the worst active conflict in Europe. It has killed more than 10,000 people, forced millions to flee their homes, wrought massive economic destruction, and precipitated a sharp decline in the relationship between Russia and the West. A referendum would do little to end the violence or restore stability in Ukraine.

Carl Bildt is the co-chair of the European Council  on Foreign Relations, and former prime minister and foreign minister of Sweden. 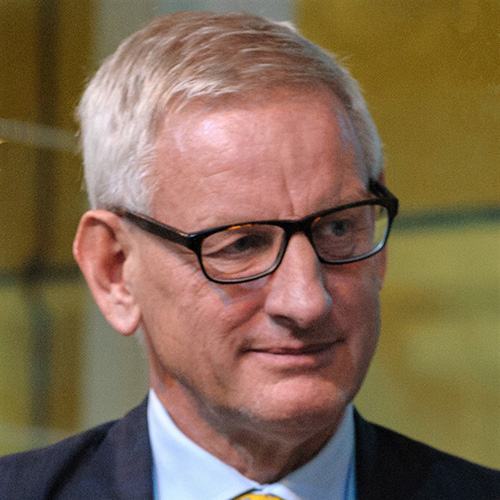