It has been a year since the launch of Operation Decisive Storm, a Saudi-led military operation aimed at restoring Yemen’s internationally recognised government to power. Yet still, the conflict in Yemen – the Arab world’s most impoverished country – remains an almost unknown war.

Perhaps that shouldn’t be a surprise: Operation Decisive Storm marked an escalation of Yemen’s many internal conflicts, which have been burning for years, rather than the beginning of an entirely new war. Despite the lack of attention it has received, the conflict in Yemen represents a pivotal moment for the region, and the world at large, due to both its likely consequences and the powers involved.

In military terms, the Saudi campaign has been a limited success. The Houthis and their allies are, by all objective measures, in retreat. By last autumn they had been pushed out of most of the south of the country and in mid-March they lost key districts in Taiz, Yemen’s third largest city. The Houthis and their allies, including former president Ali Abdullah Saleh and his military loyalists, have lost ground since the start of the conflict. Their adversaries- a mix of tribal militias, irregular fighters, and army units loyal to the embattled, internationally recognised president Abdo Rabbu Mansour Hadi – have gradually capitalised on the Saudi-led coalition’s airpower, military training and direct aid. 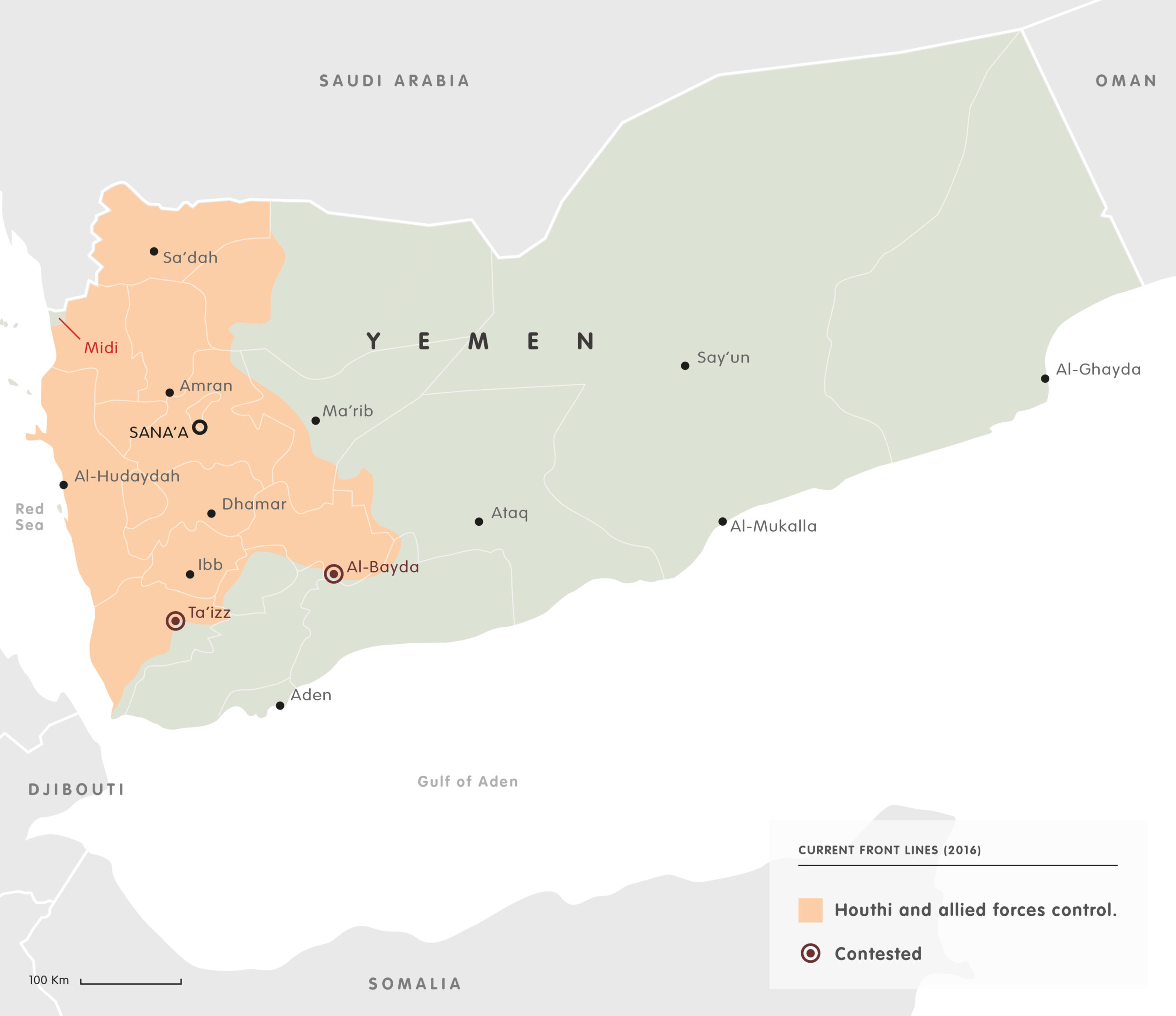 But while the coalition and their Yemeni allies have succeeded in taking the fight to the Houthis, the campaign's ultimate aim, a “return of legitimacy” – that is, the restoration of government control of the capital and of state institutions to the Hadi administration – is far from imminent.

While the Hadi government and its allies may boast of controlling 75 or 80 percent of Yemen, the reality is quite different. There is a reason why the handful of officials from the Hadi administration physically based in the country are confined to the presidential palace in Aden, the temporary capital. They travel in and out of the heavily secured compound, a de facto Yemeni Green zone, by helicopter.

While the city’s recently appointed governor and security chief have made tentative progress in securing Aden, Al Qaeda-linked militants have still been able to take advantage of the power vacuum caused by the war spurring an ongoing, UAE-backed military operation to push militants out of the city. Outside of Aden, though, Al Qaeda militants have been able to consolidate control in the provincial capital of Mukalla, Yemen’s third largest port and fifth largest city, establishing arms of governance, expanding west into the provinces of Abyan and Shabwa.

The vast majority of Yemen's northwestern highlands, the Houthi’s traditional power base, remains firmly under the control of the Houthis and their allies

While anti-Houthi tribal forces have managed to make significant progress in Marib and al-Jawf, tribal areas in the north where resistance to Houthi incursions has been the strongest, the battle for the two provinces has settled into a virtual stalemate. Tentative gains by anti-Houthi forces into the district of Nihm, in Sanaa governorate, have yet to give the impression that the capital is at risk of falling. In short, the vast majority of Yemen's northwestern highlands, the Houthi’s traditional power base, remains firmly under the control of the Houthis and their allies. Frequent rhetoric regarding the impending “liberation” of Sanaa notwithstanding, few observers are under the impression that it will be easy, or possible at all, to dislodge the Houthis and their allies by military means from the control of the capital and its surroundings – let alone the Houthis’ native province of Saada – without destruction and civilian bloodshed in excess of what the country has already suffered. Despite the breadth and firepower of the coalition, a decisive victory over the battle-hardened Houthis has yet to materialise.

The disintegration of a nation

Whoever ends up ruling Yemen at the end of the conflict will inherit a nation in almost unfathomably deep crisis. Its worth stressing that Yemen was not just already incredibly impoverished before the war began but also at the brink of financial insolvency. If the war were to end in the coming weeks or months the damage that Yemen has suffered will take years if not decades to bring Yemen to a point where it is merely “underdeveloped.”

Yemen's past, present and future have been slowly incinerated.

Much of Yemen’s already inadequate infrastructure has been completely destroyed. Key roads have been obliterated by airstrikes while clashes and sabotage have left key cities with power cuts measured in days and weeks, rather than hours. Yemen’s industrial capacity, similarly, has been deeply damaged. Major factories that employed hundreds of Yemenis and provided some modicum of self-sufficiency in the import-reliant country have been been bombed and shelled into rubble. Across the country, hundreds of thousands of children are out of school, millions of heads of households have lost jobs and roughly 15 million people – more than half of the population of the country – does not have enough food to eat. Most of those left are too poor to leave, trapped by neighbouring countries tightening of their borders.

Much of Yemen’s upper and middle classes on the other hand have already fled the country, while the bulk of the country’s key business families – figures that will be key in any rebuilding process –  started to liquidate their Yemen-based assets some time ago. Thankfully, the Yemeni Central Bank has managed to prevent the crash of the Yemeni rial due to significant efforts by international actors, bank employees and a rare collaboration between representatives of the nation’s warring factions. But bank insiders continue to express fears that they can only stave off devaluation – and mass inflation – for so long, threatening a chain reaction that will exponentially exacerbate the nation’s economic and humanitarian crisis. Even the ancient country’s past has not been spared: scores of historical sites have been destroyed or damaged by the conflict. Yemen's past, present and future have been slowly incinerated.

This last part is perhaps most significant. Even greater than the physical and financial effects of the crisis have been the psychological and societal trauma it has caused. Buildings and factories can be rebuilt, roads and power lines can be restored. But the less tangible but more important lasting effect of the conflict will be the deep shadows it casts over Yemen for the indefinite future.

Nearly every political party and faction have themselves split into different factions. Even those who have technically remained unified remain riven by internal tensions

Yemen is more divided that it has ever been in its modern history. Nearly every conceivable fault-line has been ripped open. The scorched-earth nature of the Houthis-Saleh campaign in the south and their continued marginalisation has caused secessionist-leaning southerners to harden their stance that continued unity is unsustainable. Once hidden tensions between central Yemen and the north have come blaringly out into the open. Sectarian sentiments once uttered by extremists in private are now loudly proclaimed by mainstream figures and officials on satellite television and in newspapers. Rather than seeing themselves on different sides of a political conflict, Yemenis increasingly on different sides in a regional battle: Yemenis in the north have increasingly directed blame for the destruction wrought by Saudi-led airstrikes towards the Kingdom’s allies in the country.

Nearly every political party and faction have themselves split into different factions. Even those who have technically remained unified remain riven by internal tensions. People on the same side of the wider conflict have increasingly come into conflict with each other. Factional divisions between different regional, political and ideological components of the anti-Houthi “resistance” have increasingly come out into the open, while quiet tensions between the Houthis and Saleh’s backers have begun to mount.

Despite the dire nature of the crisis facing Yemen there is much that can be done by international actors to both ameliorate the current situation and push key factions towards returning things to the political track, particularly in light of increasing signs of openness from certain key factions.

The European Union remains one of the few actors to be viewed positively by all key stakeholders in Yemen, putting Europe in a strong position not just to aid ongoing talks, but also aid key factions in building an inclusive, post-conflict government

Despite the thorny  nature of the conflict, recent breakthroughs – most notably the implementation of a border truce between Saudi Arabia and the Houthis – demonstrates a potential opening. It is imperative for key international actors to continue to back both the UN-brokered political process and the related, if far quieter talks, brokered by regional players.

Support for the upcoming UN-lead talks in Kuwait and the related ceasefire will be crucial. It is imperative that international actors learn from the mistakes of previous, stillborn truces and work to ensure a transparent, robust ceasefire monitoring process in order to identify those in breach of the peace and, potentially, to hold them accountable. That being said, openness to less conventional – if complementary–means of diplomacy are vital: the truce on the border in Saada demonstrates strong potential for traditional tribal conflict resolution mechanisms to play a productive role. In light of tensions between Saudi Arabia and the Obama administration, the United Kingdom’s leverage with the Kingdom is more important than ever. Simultaneously, it must be stressed that the European Union remains one of the few actors to be viewed positively by all key stakeholders in Yemen, putting Europe in a strong position not just to aid ongoing talks, but also aid key factions in building an inclusive, post-conflict government.

The dire state of Yemen cannot be emphasised enough – even once the current conflict ends, it will take mammoth, coordinated efforts to rebuild the country

It remains equally important for international actors to recognise their limits. So long as key factions are convinced that waging war remains in their interest, they are – particularly in the absence of significant international pressure – likely to remain averse to any potential peaceful resolution. On the larger level, it remains crucial to be cognisant of the deep fractures between differing sides. While the internationally-recognised Yemeni government may speak in the name of the varied anti-Houthi factions, they remain largely united only by virtue of their common enemy, holding vastly different ideologies and aims. Most significantly, southern secessionists will need to be granted a meaningful role in the process on their own merits; simply promises of decentralisation and assertions of the implementation of a federal plan are not enough. Overall, the dire state of Yemen cannot be emphasised enough – even once the current conflict ends, it will take mammoth, coordinated efforts to rebuild the country.

But it is vital that these challenges are not used as a reason to disengage. Left to smoulder, the terrible situation in the country will only deepen, and its after effects will shake the region and, owing to Yemen’s active Al Qaeda affiliate and strategic location, the world, for years to come.