Europe’s varied faces are revealing themselves in all their tricky diversity. Like Monty Python, we could look on the bright side of this to acknowledge that, when confronted with the chaos of the Brexit process, the European Union has responded with a steady resoluteness and unanimity over the last two years. And it has done so is in the face of a cavalcade of demands from its collapsing British counterpart. The negotiation represents an instance in which the EU has been able to effectively manage a crisis while maintaining a measured equanimity.

However, as far as the challenge of Viktor Orbán’s populism is concerned, the EU appears incapable of coming up with an adequate response. One reason for this failure stems from a clash of two very different philosophies, cultures, and approaches. The EU’s preference for negotiating, deliberating, and discussing things at length in a civilised manner resembles Jurgen Habermas’s notion of coffee-house culture: a public sphere in which ideas are talked over. Orbán rejects this culture quite explicitly and defines himself in other terms, of his own choosing. This was clearly on show when US television actor Chuck Norris came to Budapest a few months ago.

In line with populist politicians across the globe, Orbán not only personally welcomed Norris but even drove him around Budapest – in the driver’s seat, an unusual position for the prime minister, who is usually chauffeured about. Since, fortuitously, there was also space for a camera in the car, and the recording was subsequently shared on social media, the episode also gave viewers a glimpse into how Orbán sees himself. Specifically, the prime minister told his American guest: “You know I’m a streetfighter basically. [I don’t come] from the elite. [I come] from a small village 40 kilometres from here.” It was a reflection of this attitude, Orbán claimed, that “[n]inety percent of comment on me is negative,” Orbán said. “The liberals hate me.” To which Norris replied: “Like Trump?” “A little bit more than that,” said Orbán.” (An interesting titbit in this context is that, if one were to Google the phrase “I’m a streetfighter,” the first hit would be Steve Bannon’s self-description in 2017).

In fact the style and culture implied by this highlight the difference between the EU’s handling of Brexit and its lack of traction with Orbán. Theresa May acts in line with her self-image as an upstanding sort in her mission impossible. In contrast, to Orbán and Italy’s Matteo Salvini, the EU’s mode of consultation and cooperation means nothing. The same attitude was also apparent when Salvini recorded a backroom consultation with EU partners on his smartphone and then posted the video on Facebook.

It is vital to stress that what is at issue here is not a confrontation between the advanced and sophisticated west and a backward south and east, but, on the one side, a commitment to accord and compromise, and, on the other, a cult of strength and force.

Why is this important? Because up until now the focus of attention has remained stuck on the narrower question of whether the European People’s Party will expel Orbán. From the coffee-house culture perspective this is, of course, important – if someone cannot behave in a civilised manner, they have no place in our club. But Orbán is playing a whole different game: he wishes to turn the Europe’s Main Street upside-down. And if he does so with the help of a newly created Polish-Hungarian-Italian anti-migration bloc rather than with the EPP, then that is just as well.

But there is an intriguing long-term question here. If Orbán is successful in placing the migration fault line at the centre of European public discourse, then the EU’s response is one that anti-migrant populists will find difficult to deal with. Migration being the single greatest source of threat for Europe would logically lead one to conclude that pan-European border is necessary. This may actually play better in Hungary than Orbán hopes or realises: it is unfortunate but nevertheless a fact that over the past 800 years Hungary has tended to be on the losing side of many wars. As a result, trust in the Hungarian armed forces is not exactly high, and citizens trust NATO much more than they do their own military. After initially endorsing the idea of a common border force, Orbán is now vehemently opposed to it, portraying it as an attack on national sovereignty and a limitation of his powers that could lead all the way to a common army or, worse, a common prosecutor’s office. It is not easy being a streetfighter: when actual solutions to the problems Hungarians say they care about are being crafted in a European coffee-house, then all the huffing and puffing and shadow-boxing against imagined or potential threats will not help. Hungarians may come to see the institutions that fight the real fight as more attractive than their blustering ‘streetfighter’.

Indeed, a recent ECFR poll, conducted in the 16 largest member states, shows that the structure of anxiety is rather different in Hungary to the rest of Europe. Voters in 12 out of the 16 view Islamic radicals – and not migration – as the greatest threat. Hungary was actually the only country where migration was seen as a more important threat than Islamic radicals. It worth mentioning that four years ago migration was not even a topic of note in Hungary. “Migrants as horror” was the political construction of Orbán’s propaganda campaign – which in its magnitude and repertoire was unprecedented among European countries.[1]

In addition, support in these countries for a populist “coalition of streetfighters” is not much in evidence, especially when one compares what voters in Italy, Poland, and Hungary are worried about. For Orbán, it may even be hard to count on a strong alliance with governments of Poland and Italy given that these two societies do not share his understanding of migration as Europe’s number one priority. Poles fear Islamic radicals and Russia much more, while Italians are concerned about the economic crisis above anything else. 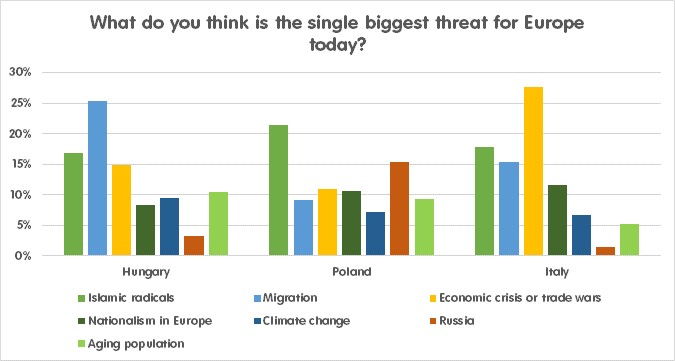 The great Polish sociologist Zygmunt Bauman, who recently passed away, called our times “Liquid modernity”. By that, he referred to the conditions of our world being ever changing, where nothing is solid, everything is in flux, turbulence is perpetual, and there can be rapid implosion of some forms, and a sudden, hardly foreseeable emergence of others. This dictum holds good for Brexit; the decision about Fidesz’s fate in the EPP; and the coming European election, and it holds good for foreign policy as well, where everything is in a turmoil, and alliances and commitments change quickly in an unpredictable fashion.

All this is partly because of the clash of different cultures – and streetfighters’ refusal to play according to the rules they despise. However, this also makes it hard for the streetfighters to know what to hold on to as much as it is difficult for anyone else trying to find their feet in today’s political turbulence.  We do not yet have a reason to be triumphant over the populists. We took a blow and time will tell whether we can fight back successfully.