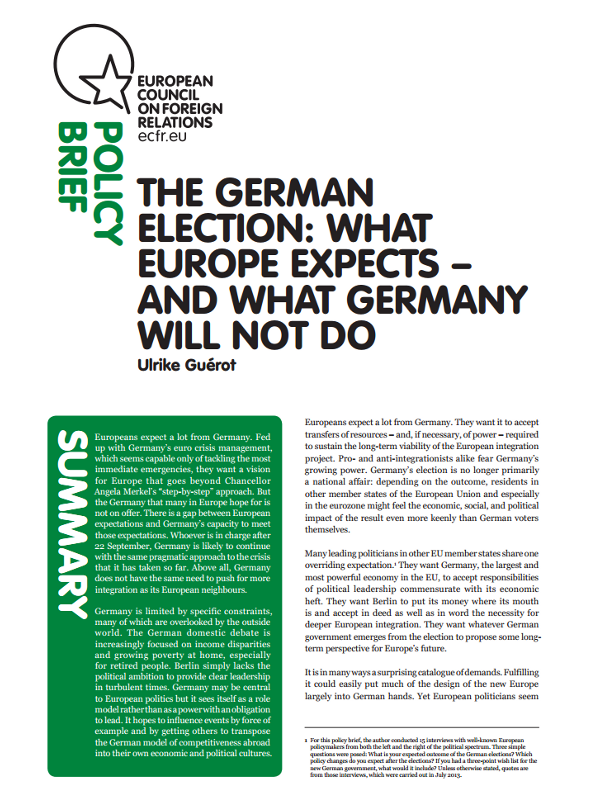 During the worst moments of the euro crisis, foreign leaders were amazed at the European approach to summer holidays. However bad things were, nothing stood in the way of the road to the beach, with a promise that nothing was to be done until September came round. This year summer has been extended, and Europe's leaders seem to be hanging around even longer before doing anything meaningful.

They have been waiting, of course, for the German elections before springing into action with long wish lists for the reinvention of Europe. But no matter what their hopes are, and no matter how vital Berlin is to European politics, post-election Germany is likely to prove a grave disappointment.

The past five years have seen Germany forced into a role of reluctant hegemon, its political and diplomatic clout enhanced to match its doubtless economic heft. It's the paymaster, the conductor and the driver. For other European leaders, sick of fire-fighting, Germany is now also the great hope if they are to move the European Union forward and solve the crisis at its roots. Other than an admission that Greece may need yet more money, they have understood that now is not the time to throw up issues that are bound to make Merkel and the German people feel uncomfortable. Just wait until after the elections, they think, and then we can make real progress.

The bad news is that these hopes of real progress are based on a misreading of Germany and are likely to be confounded.

Germany's domestic preoccupations tend to be underestimated by outsiders. Its evident economic strengths and their own comparative weaknesses have led the rest of Europe to regard modern Germany as a cash-rich colossus of our age. But despite its successes, it has real concerns that have come out in the election campaign. Germans worry about income inequalities, awful demographic projections, faltering investment levels, crumbling infrastructure, and inadequacies in higher education and in research and development.

Seen from elsewhere, these may not look particularly bad, but in Germany they are significant enough to shrink any wider ambitions to lead the continent.

At the same time, Germans believe their undoubted successes are due to their own efforts (especially compared with those feckless southern Europeans). They went through their own painful reforms, getting wage costs under control and making their own high-quality exports competitive through hard work. That, they say, is the secret to their success, rather than splashing money about – and that is why Germany continues to emphasise austerity as the route to economic success.

It can be argued that Germany has benefited from membership of the euro, presenting it with an in effect undervalued currency, and the fortuitous explosion in demand for its high-quality manufactures by China. It can also be argued that austerity as a cure is harming the patient rather than healing it. But no matter: wider hopes that German largesse will result in a growth strategy capable of stimulating the entire European economy will remain unfulfilled, even after the election.

Germans are also concerned about the institutional direction in which Europe is going. From elsewhere in the EU, for instance, banking union is seen as a key part of the solution to the crisis, to stabilise the European project and to disentangle state finances from bank finances. But Germany has dragged its feet on this (as in other areas of fundamental reform), and the legal and political hurdles that are being thrown up to this and other areas of reform that make Germans feel instinctively uneasy are unlikely to disappear once any new coalition government has taken power. Germany has become used to its slow, pragmatic and legalistic approach to dealing with the crisis, and – unless dangerous instability returns to the markets – it will not change this

Loftier ambitions for Europe on the world stage are also set to be frustrated. David Cameron's parliamentary defeat over intervention in Syria came as a surprise to most, given the leading role Britain – and France – typically play in European foreign policy. Germany's decision not to join in was no surprise. But many believe Europe will only be a global force with Germany involved, given its size and importance. And although Europe needs Germany if it is to have a true strategic focus, Germany itself lacks such a focus, preferring commerce to diplomacy. This will not change.

It is a long way from providing the energy and vision that the rest of Europe feels are necessary to solve the crisis at its roots. Post-election Germany will have a similar approach to pre-election Germany: legalistic, cautious and resistant to grand plans and gestures, no matter how much its European neighbours are looking to it to act. They might as well have stayed on the beach.

The article first appeared in the Guardian