The sudden eruption of hostilities around Nagorno-Karabakh, a disputed territory in the South Caucasus, caught many outside observers off guard. Although sporadic fighting has been a frequent occurrence across the Line of Contact, a heavily fortified buffer zone separating Armenian and Azerbaijani forces, conflict has generally been kept at low intensity since 1994, when the two sides agreed a fragile truce. Parties would normally flex their muscles every once in a while, but wouldn’t let the fighting spiral into a bigger confrontation. Troops would soon be called off to their trenches and the exchanges of artillery would be withdrawn in favour of the everyday routine of belligerent rhetoric. And so the situation has gone round in circles since 1994.

This time, however, conflicting sides engaged in what can be described as the deadliest fighting in the last two decades, shaking the military status quo on several fronts and claiming at least 64 military and civilian casualties. In contrast, in a similar standoff two years ago, that coincidentally lasted for five days as well, parties reported to have lost 19 people in total. So when first accounts of heavy fighting were reported on 2 April, and the world came to realise that this was far more serious than an ordinary show of teeth, Georgia ducked in silent anticipation, a seemingly paradoxical reaction given the country’s geographical proximity to Nagorno-Karabakh. Neither the Ministry of Foreign Affairs, nor any other governmental authority issued an official statement on the subject. Even the president, who is usually outspoken on matters of foreign policy, remained silent. Occasional commentaries emerged from politicians here and there, but were limited to standard wishes for rapid de-escalation. As one Georgian expert put it, the country’s leadership was probably doing all it could at that moment – pray for a peaceful end of hostilities.

Beyond the silence, however, one could easily sense the signs of alarm in Tbilisi. Already on 3 April, Georgia’s Prime Minister Giorgi Kvirikashvili convened an urgent meeting with senior government, parliament, and security authorities, gathering far wider representation of officials than both of Georgia’s security councils. The following day, defence  and foreign ministers got hold of their respective colleagues in Baku and Yerevan, and a day later Nagorno-Karabakh became one of the subject of discussion at a meeting of the president and the prime minister, a highly unusual event given the country’s tradition of clunky intra-executive relations. So when both sides agreed a ceasefire on 5 April, Tbilisi breathed a sigh of relief.

The Georgian reaction to recent events in Nagorno-Karabakh is symptomatic of Tbilisi’s complex relations with its two southern neighbours, with whom it not only shares a common border, but also a long history of cohabitation and a tradition of close cultural and economic ties.

Georgia is an important transportation corridor for Azerbaijan, which provides abundant energy resources to Turkish and European markets and a lifeline for the Armenian economy, offering its highways, ports and airspace to this economically isolated country. It was exactly the economic benefits of maintaining friendly relations with both that forced Tbilisi to delicately avoid the tough choice of taking sides and maintain its neutrality from the very onset of the conflict in 1990s. 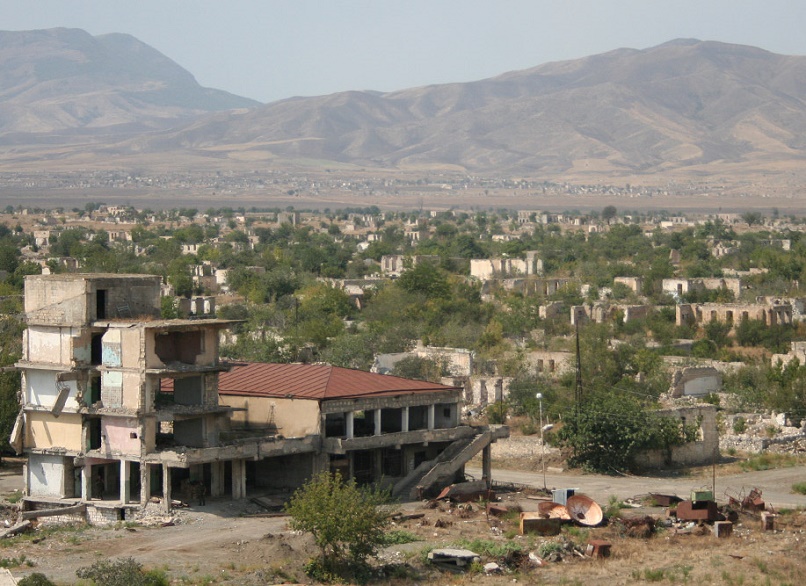 While trade is strong on both fronts, Georgian-Azerbaijani cooperation is much stronger on matters of foreign and security policy than that of Georgia and Armenia, largely due to Armenia’s position as an ally of Russia and Georgia’s troubled relations with it. Not surprisingly, Georgia’s foreign policy strategy has meant that it has earned “good neighbourly” with Armenia, while Georgian-Azerbaijani relations have been elevated to the level of “strategic partnership”. This however, does not in any way affect Georgia’s position toward the Armenian-Azerbaijani conflict as both countries remain high on Tbilisi’s bilateral policy agenda.

Georgia’s silent alarm over the Nagorno-Karabakh flare-up is fuelled more by a sense of Georgia’s own vulnerability than because it is sympathetic to its favourite neighbour. Georgian officials are fearful that the country’s favourable location – a blessing in peace – could easily become a curse in the event of an all-out war.

Being heavily reliant on international and regional transit revenues, tourism receipts and investments, Georgia’s economy is highly sensitive to regional economic and political developments, making it particularly vulnerable to even the slightest of changes in the region. For a country that has not yet fully recovered from a devastating war of its own, the prospect of experiencing yet another is petrifying. Moreover, Tbilisi fears that Azerbaijan’s critical transit infrastructure might come under attack, as the one on Baku-Tbilisi-Ceyhan Pipeline did during the 2008 Georgia-Russia war, posing a serious threat to Georgia’s energy independence and disrupting the vital supply lines pumping Caspian energy resources westwards through Georgia.

No less important is the fear of conflict spillover. Georgia is home to sizeable ethnic Azerbaijani and Armenian communities, each constituting approximately 6 percent of the overall population. Although the two communities have coexisted peacefully for as long as one can remember, they naturally sympathise with their kin in the conflict. This, combined with their dense concentration in a mosaic of ethnically-mixed towns and villages along the southern border of Georgia, a stone’s throw from the territories of Armenia and Azerbaijan, establishes a potentially fertile ground for in-country tensions and provides Tbilisi with yet another headache.

Even if Tbilisi manages to minimise the economic repercussions of a large-scale confrontation and prevent the conflict from spilling over into its own territory, it will still have to deal with a host of other conflict-related issues, including the influx of refugees, humanitarian assistance, and its possible role as a mediator.

There is also the question of who Georgia should support in the international arena. The declarations of support for each other’s territorial integrity, have become a lasting tradition in Georgian-Azerbaijani diplomatic encounters, which is hardly any surprise from two countries that have similar territorial issues. While Georgia has supported Azerbaijan in the past, it opted not to this time. Georgia’s Defence Minister Tinatin Khidasheli, who allegedly pledged support to Azerbaijan’s territorial integrity during a phone conversation with her colleague in Baku, made no such statement in public. The Minister of Foreign Affairs Mikheil Janelidze, delivered an almost identical message without any reference to territorial integrity, presumably as a gesture to stress Georgia’s neutral position in the conflict. Far from being a primary matter in this conflict, these statements demonstrate yet further that Georgia has to walk a tight rope to maintain friendly relations with both of its neighbours.

What Georgia fears most, however, is the military involvement of its two other neighbours – Russia and Turkey – who have conflicting interests in the region. Armenia hosts two Russian military bases and is under the security umbrella of the Russian-led Collective Security Treaty Organization, which provides Moscow with an official justification for military intervention if Armenia’s “sovereignty and territorial integrity” is threatened. Azerbaijan on the other hand, enjoys strong political and military support from Turkey, most importantly through the 2010 Agreement on Strategic Partnership and Mutual Support, which speaks of “using all possibilities” if either of the countries comes under military attack.

While outright military intervention from either of the outside powers, or both, seems extremely unlikely at this moment, it is the idea of a proxy war that haunts Tbilisi, especially in light of their recent stand-off over Syria. Since neither Turkey nor Russia have direct land access to their respective allies, authorities in Tbilisi would have to face a tough dilemma on whether to allow or deny the transportation of military hardware through its territory. The complete lockdown of land infrastructure and airspace – the likely Georgian reaction – would on the one hand alienate Turkey, its number one trading partner, and aggravate the already strained relations with Russia on the other. As some bold theories suggest, if Russia were to fail to secure transit clearance from Georgia, it might instead secure a land corridor by force between its base in Gyumri in north-western Armenia and 4th Military Base stationed in Tskhinvali Region/South Ossetia, just 30 miles from Tbilisi – a move which would might see Georgia dragged back into conflict with Russia once more.

Tornike Zurabashvili is a Research Fellow at Georgia’s Reforms Associates (GRASS), a non-partisan, non-governmental policy watchdog and think-tank based in Tbilisi, Georgia.

Sergi Kapanadze is the Director at Georgia’s Reforms Associates (GRASS), a non-partisan, non-governmental policy watchdog and think-tank based in Tbilisi, Georgia.

Never-ending divorce: The role of UK-EU security cooperation after Brexit

Between Russia, Sweden, and NATO: Finland’s defence of “sovereignty equality”

China’s new military base in Africa: What it means for Europe and America