Saudi Arabia’s decision to flood markets with cheap oil has resulted in a dramatic collapse in oil prices. The dispute between Moscow and Riyadh centres on oil price levels, production cuts, and diverging views about how to deal with competition from US shale oil. It is unfolding against the backdrop of weak demand – slashed even further by the coronavirus – and low prices, which were already putting a strain on the government budgets of oil-producing countries. This spat is likely to result in a significant economic deterioration right across the Middle East and may well aggravate already mounting geopolitical tensions in the Gulf.

At a general level, the price plunge will result in a huge loss of revenue for oil and gas producers. Most of them have already been accumulating fiscal deficits, which are now set to widen substantially. In more than half the countries in the region, the fiscal breakeven point, which marks the oil price required for the government budget to be balanced, is more than twice the current price of oil (see figure 1).

Even before the price war, the International Monetary Fund had warned Gulf Cooperation Council countries that their financial reserves could be exhausted in less than 15 years. Significant cost-cutting measures (including reductions in salaries and subsidies for public services) and tax rises are now more urgent than ever unless there is a rapid price reversal. This could impact on social stability. While countries like Saudi Arabia and the United Arab Emirates can handle the short-term blow by tapping reserves and borrowing from international capital markets, non-GCC countries like Iran and Iraq do not have this option due to various high risks associated with them – including US sanctions against Tehran. 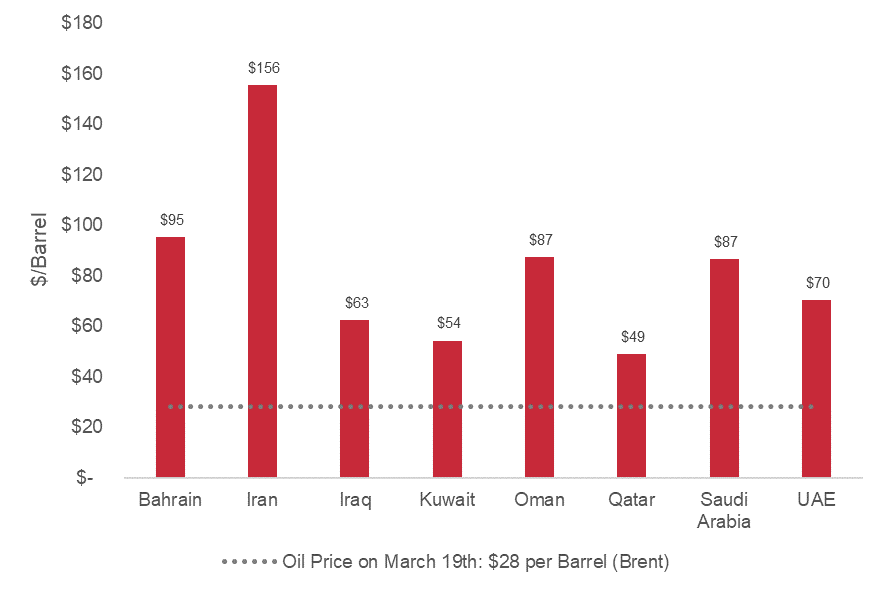 The economic fallout from the price war is compounded by the effect of the coronavirus. This has especially hit sectors of Gulf economies that have seen some progress in economic diversification: finance, tourism, trade, and logistics. But, as oil revenue plummets, these sectors offer no lifeline. Several international banks have cut their projections for non-oil GDP growth in the region, in the case of the GCC countries from an average of 2 percent last year to 0.4 percent.

Some Arab Gulf states are better positioned than others to deal with a prolonged period of low oil prices. Kuwait and Qatar, for example, have relatively high oil income per capita, and their governments can resort to substantial financial reserves.

But most countries now face profound challenges. The stakes are particularly high for Saudi Arabia, OPEC’s leading oil producer. The kingdom is struggling with a widening fiscal deficit and shrinking reserves (in 2014, Saudi Arabia’s reserves were some 48 percent bigger than today). Riyadh initiated the price war, and it presumably believes it can weather the initial revenue collapse. But such assertive oil policy could have significant consequences both for Crown Prince Mohammad bin Salman’s efforts at a consolidation of power at home if it affects social spending; and for his country’s international standing as a contributor to the crisis.

The UAE, too, is contemplating a period of economic worry with the Emirate of Dubai at the centre. Having never fully recovered from the 2008 financial crisis, Dubai’s troubles have grown markedly in recent years. While making some progress towards diversification, state-related entities have accumulated massive debt – totalling around half of Dubai’s GDP. The local stock exchange, the Dubai Financial Market General Index, has lost some 61 percent of its value since 2014 and the real estate prices have fallen through fear of a bubble. Overall, the UAE’s non-oil GDP growth has slowed noticeably in recent years, while the government’s non-oil fiscal balance has widened. This year’s Expo, planned for October, would likely have given the economy a boost that may now not arrive as expected.

In Iran, the last year has seen the country struggle to deal with massive losses in oil revenue and trade due to US sanctions. Its oil exports have shrunk to less than a fifth of the 2017 average (from 2.5 million barrels per day to less than 0.5). Iran’s GDP is estimated to have contracted by up to 9.5 percent in 2019, following negative growth of 4.8 percent the year before. Worse, high inflation of more than 35 percent has dramatically eroded purchasing power. Oil price declines will now further constrain the Iranian government’s ability to sustain social spending and will hamper efforts to fight the coronavirus, whose impact in Iran has been significant. Tehran has even asked the IMF for emergency finance of $5 billion – the first time it has requested IMF support since 1962. Social instability could grow given the wave of unrest witnessed by the country last year, especially if the government is forced to cut social spending, including subsidies.

But Iran’s position also differs from that of its Gulf peers. First, at around 30 percent, the government budget’s dependency on oil revenue is relatively low. In comparison to the other regional hydrocarbon exporters, Iran’s non-oil fiscal deficit is by far the smallest (see figure 2). Second, Iran will be somewhat less affected by the oil price slump, as it already underwent a sanctions-induced oil revenue shock in 2018-19; the Iranian economy has begun to adjust. 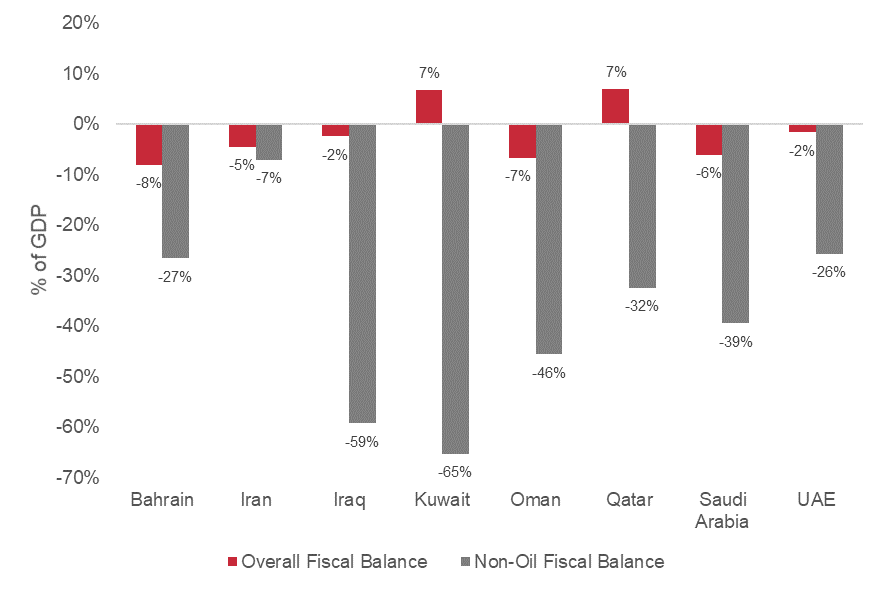 The country in the region that may suffer the most from the oil price war is Iraq. In its 2019 budget, some 95 percent of the Iraqi government’s budget relied on oil revenue. The consequences are being felt, as the losses in oil revenue make it difficult for the Iraqi state to pay the salaries of public servants.

Iraq’s budgetary crisis is unfolding at a precarious moment. Baghdad is in the midst of a lengthy political crisis. Economically, the government is struggling to provide basic public services, including power and healthcare. Frustration among Iraqis is growing, with public protests frequent. On a technical level, low oil prices could slow the expansion of the Iraqi upstream oil industry, which has growing marginal production costs because of increasingly complex geology. The situation is complicated further by the standoff between Iran and the United States. US sanction waivers for natural gas and power imports from Iran, which are essential for Iraq’s energy security, are only granted for short periods of 45 days. Monthly imports of physical cash – Iraq’s central bank deposits its oil revenue with banks in the US – have been delayed by Washington for political reasons. A new escalation from a combination of extreme socio-economic stress, a paralysed and fragmented political class, competition between a multitude of militias, and outright (proxy) warfare by Iran and the US is very much within the realm of the possible.

The oil price war could also cause instability beyond the Gulf. Egypt in particular depends on Gulf financial support to maintain spending on development, social services, and security. Jordan and Lebanon also rely on Gulf financial aid. Should fiscal pressure grow, the Arab Gulf countries might reconsider their spending on budget and development assistance in the Middle East.

All this notwithstanding, the region’s powerhouses – Iran, Qatar, Saudi Arabia, and the UAE – still likely control sufficient reserves to continue their political and military engagements abroad, at least into the foreseeable future. Over time, however, if oil prices stay low, these players might be forced to recalculate the cost-benefit analysis of their regional interventions. In the meantime, the oil price war remains in full swing – and it is unclear when either Moscow or Riyadh might blink first.