A quiet but fundamental shift is under way in the European Union’s policy on the Western Balkans. With the term of the current European Commission nearing its end, it seems that any plans for enlarging the union are following suit. Enlargement is becoming the policy that shall not be named – at least, in town hall meetings and parliaments in western Europe.

It is no secret that most of the European public is against enlargement – as an upcoming ECFR survey demonstrates. (Strikingly, Austrians and Germans, who host the largest Balkan diasporas as a share of population, are among those who are most sceptical about enlargement.) 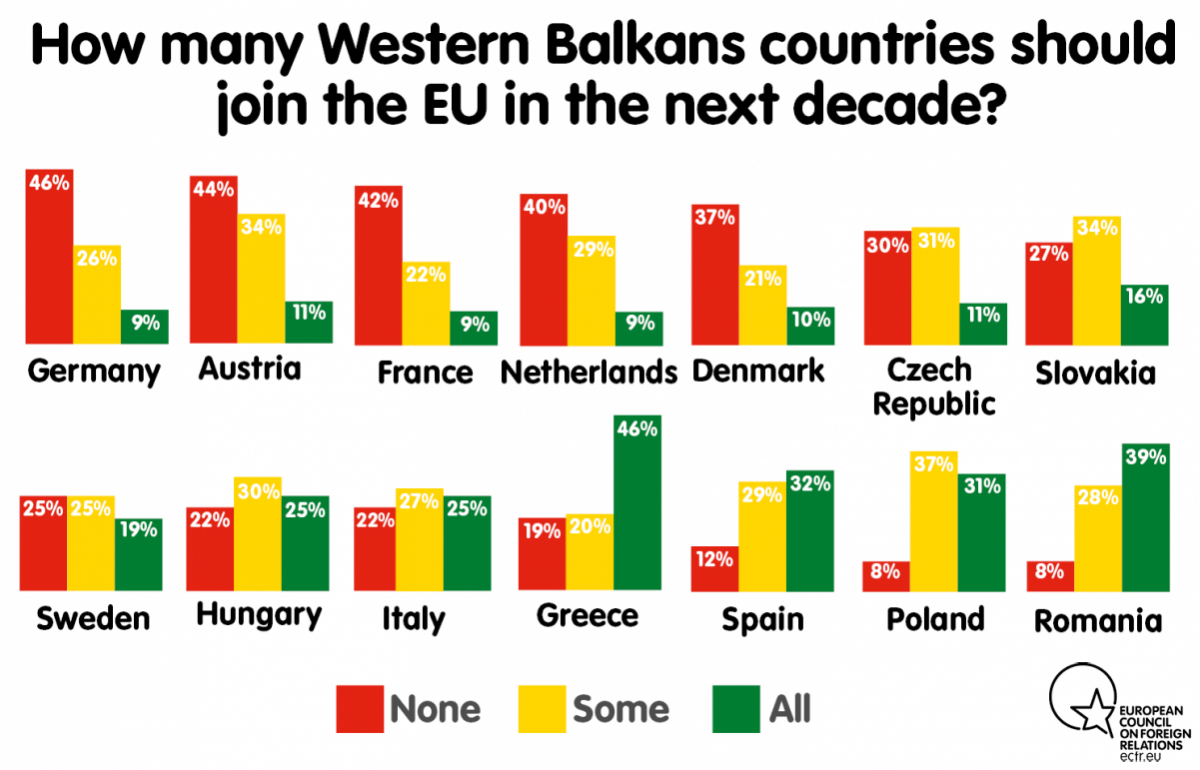 But, as Eurobarometer confirms, this trend is not new. What has changed is policymakers’ clear commitment not to deviate from public expectations on peripheral issues such as this one. “Because of the fear for [sic] foreign immigration”, one German MP explained recently, “people in my constituency would notice – and scrutinise – a decision to open accession negotiations with North Macedonia. Even though it is just a small step, far away from accession, it will be perceived critically by the public at this moment.”

Of course, the reasons for this defensive posture go beyond the migration crisis. They have to do with Romania’s and Bulgaria’s difficult transformations into member states, with the rule of law deficits in Poland and Hungary, and with the lack of leverage that other member states and EU institutions have over these countries. Most importantly, Europeans’ fears about the durability of the EU – with a majority of citizens believing that there is a realistic possibility that the EU will fall apart in the next 20 years – seem to point in the direction of strengthening ties between member states rather than adding to their number. In other words, the French position of putting the brakes on enlargement has less to do with the Western Balkans itself than with President Emmanuel Macron’s desire to prioritise quality of integration.

Yet Macron’s recent visit to Belgrade seemed to break with this pattern. For the first time in decades, a French president devoted significant time and political capital to a Western Balkans country.

At the joint press conference with his Serbian counterpart, Aleksandar Vucic, Macron adopted a friendly attitude towards countries in the region (which occasionally prompted the audience to interrupt his speech with a standing ovation). But he did not mention the accession process, instead focusing on Serbia’s dispute with Kosovo. Macron promised to help relaunch talks on normalising ties between Serbia and Kosovo in the next few weeks, reaffirming France’s commitment to the joint format with Germany he helped create in Berlin last April.

The German government convened the Berlin meeting to curtail behind-the-scenes negotiations between Vucic and Kosovo’s president, Hashim Thaci, over a potential land swap deal. German Chancellor Angela Merkel invited leaders from other Western Balkans countries to voice their concerns about the chain reaction such a deal could set off – and to persuade Macron to help her redirect the talks between Vucic and Thaci. The meeting also provided an opportunity to emphasise the fact that the negotiations had already prompted Kosovo’s prime minister, Ramush Haradinaj, to impose a 100 percent tariff on Serbian goods entering his country.

When Josep Borrell leaves his post as Spanish foreign minister to take up the role, he will have to prove his “Europeanness” on the Western Balkans

Not much has changed since then. Even though Haradinaj has been forced to resign after being subpoenaed by war crimes prosecutors in The Hague, Kosovo has not given in to pressure to repeal the tariff. French diplomats hope that a new government in Pristina will try to mend fences with Belgrade. Paris wants Kosovo and Serbia to begin a process that will ease political tension and improve security in the Western Balkans. Berlin also wants this. But it also wants to reassert control over the dialogue between the countries – which Federica Mogherini, the EU’s high representative for foreign affairs and security policy, drove with little transparency on the proposed land swap.

France’s and Germany’s main message for the Western Balkans is clear: countries in the region should prioritise efforts to demonstrate a sufficient level of political governance – and they will be permitted to begin the technical processes of EU accession only after they have achieved this. Thus, it is still too early to tell whether countries in the Western Balkans are moving towards EU membership or just an association between some sectors of their economies and the EU’s market.

With the next European Commission unlikely to have enlargement high on its agenda, the EU’s next high representative for foreign affairs and security policy will be relatively influential in the region. When Josep Borrell leaves his post as Spanish foreign minister to take up the role, he will have to prove his “Europeanness” on the Western Balkans. With the United Kingdom leaving the EU – and thereby reducing its leverage in diplomacy in the region – Borrell will be forced to align with Berlin and Paris on the Kosovo-Serbia dialogue.

To produce sustainable solutions, any agreement between Serbia and Kosovo will need to encompass the wider political aspects of good neighbourly relations. The creation of a common future for communities in northern Kosovo and southern Serbia will involve a long-term view rather than just the demarcation of territory.

The complex arrangements behind the makeup of Spain’s regions provide a good example of how countries can achieve a workable deal that goes beyond ethnic divisions. There are good examples of this in the Western Balkans as well: the agreement between North Macedonia and Greece, and that between North Macedonia and Bulgaria, are exactly the kind of political gestures that testify to countries’ willingness to resolve long-running disputes. Fostering the political will to reach such deals at the top, and helping the public understanding them, will be the next high representative’s main preoccupations in the Western Balkans.

And while the EU is recalibrating its policies on the Western Balkans, other powers are upping their game there. The region has been a focus of China’s efforts to extend its Belt and Road Initiative in Europe for quite some time. There is a visible Chinese presence in almost every corner of the region. Meanwhile, military cooperation between Belgrade and Moscow is also thriving – to “preserve Serbia’s territorial integrity”, as Vucic announced last week in Nis. The southern Serbian city hosts the “Russian-Serbian Humanitarian Center”, which is widely regarded as a potential foothold for a Russian military presence in Serbia. Vucic visited Nis to welcome ten BRDM-2 military reconnaissance vehicles under the first phase a Serbia-Russia bilateral arms agreement. Last June, the Slavic Military Brotherhood exercise – which involved elite Belarussian, Russian, and Serbian troops – took place in northern Serbia.

The EU should not wait for too long before moving towards a more hands-on approach to economic, migration, and security issues in the Western Balkans. As it recalibrates its policy tools and their underlying logic, the EU should make clear that the onus is on Western Balkans countries to act responsibly. Their political maturity and choices, and not the box-ticking exercises that characterise the accession process, will set the tone of their relationship with the EU more than it has in recent decades.