Xi Jinping’s appearance in battledress uniform, broadcast on Chinese television, at what is described as the PLA’s command centre, connects several dots together for the first time.

Xi is now labelled “Commander-in-Chief”, a title that even Mao Zedong did not appropriate. And while Deng Xiaoping – most importantly, in the 1985 military parade that marked his complete ascendency – and Jiang Zemin – significantly during a showdown across the Taiwan Straits in 1996 – occasionally donned military uniforms, they, and Xi himself, wore civilian clothing at the anniversary parades of the PLA in Beijing in 1999, 2009 and 2015.

A demonstration to the Chinese public and to the world is intended: Xi Jinping is in complete control, including operationally, of the Army

The title and the clothes attest to the extreme centralisation of power achieved by Xi Jinping. Some will argue that some of his predecessors wore uniforms – but they never took the title. Others will mention the fact that the US president is also the Commander in Chief, but US presidents never wear uniforms. Clearly, a demonstration to the Chinese public and to the world is intended: Xi Jinping is in complete control, including operationally, of the Army.

Xi’s new clothes confirm that control was indeed a key goal of the military reforms announced in recent months. He has broken up the old regional and general staff organisation, in an evident effort to fight entrenched bureaucracies, which include deep solidarities inside networks that have existed for decades. Coming alongside the purge and  humiliation of the two former vice-chairmen of the Central Military Commission, it confirms that operational, as well as political, autonomy for the Army is out of the question. 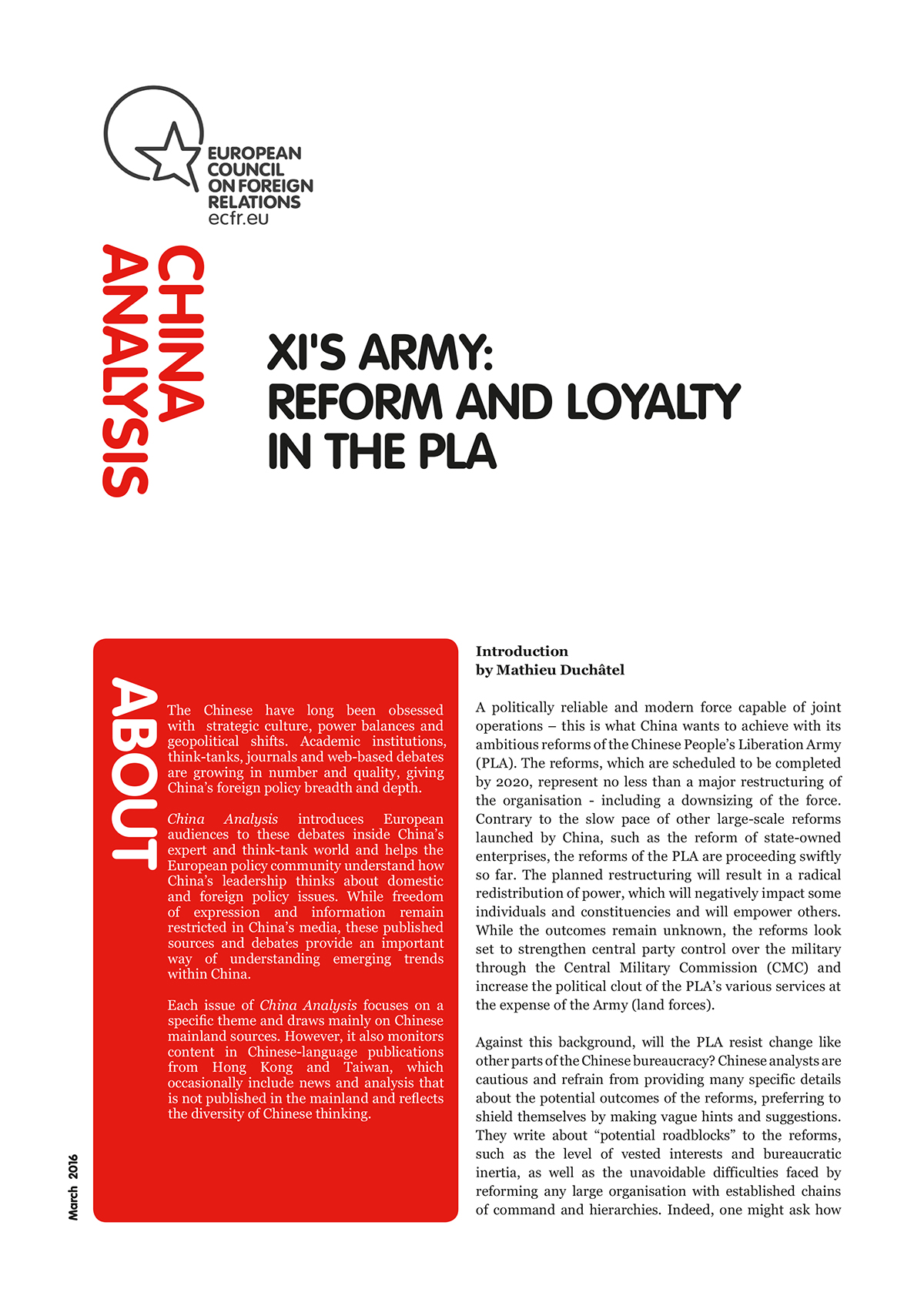 Xi's army: Reform and loyalty in the PLA

Is this just a new version of the old mantra that “the Party commands the gun”? Yes and no.

Yes, insofar as before 2012 Hu Jintao was rumoured to be a distant emperor, perhaps not caring enough or partly rejected by Army insiders. Analysts thought they discerned fragmentation and a lack of control over and within the PLA and paramilitary – with some alleging that some maritime incidents, or border skirmishes with India, may well have gone beyond the intent of the top leadership. It was tempting to paint China’s assertiveness in the South and East China Seas as a modern repetition of Imperial Japan’s syndrome of the 1930s. To this day, there has been speculation that radical military officers and some nationalist politicians cowed Japan’s civilian governments onto the path of confrontation and war, while the aloof Emperor, commander-in-chief in name, might have been overtaken by events.

Within two months, Xi has broken up the decades old organisational chart of the PLA [and] toned down its budget rise for 2016 to an almost benign 7.6 percent

This was very likely not the case in 2009-2012, where an open rift inside the top political leadership coincided with the PLA’s enthusiasm for a role – and for an increased budget. And it will certainly not be the case today. Within two months, Xi has broken up the decades old organisational chart of the PLA, toned down its budget rise for 2016 to an almost benign 7.6 percent; small beer considering a retired PLA general had been overtly campaigning for a 20 percent rise in 2016.

But he assumes absolute and direct pre-eminence over military operations in the same month that the PLA has advanced its pawns in very significant ways in the South China Sea. In the very week that Xi was meeting Obama in Washington at the Nuclear Security Summit, China was installing anti-ship missiles on Woody Island in the Spratleys, landed fighter jets on several of the new artificial islands built around rocks and atolls, sent the Central Military Commission’s vice-chairman, General Fan Changlong to the Spratleys, and reportedly started to expand Scarborough Shoal, a mere 140 kilometres from Manila.

Xi’s uniformed public showing equates to putting his personal signature on all these moves. Retrospectively, it should impact the argument that PLA moves across the Line of Control at the Indian border during Xi’s visit to India in September 2014 were somehow uncoordinated and had escaped his attention.

But Xi’s new title does not reinforce the principle that the Party commands the gun, unless one accepts the notion that China is at war. During the struggle for the liberation or conquest of China, Party leaders were also often military commanders, a situation that was briefly resurrected with Marshall Lin Biao’s top role in 1969-1971, at the height of the Cultural Revolution. Since 1949, the Party has control over the PLA, but leadership is not fused. Xi Jinping actually blurs that demarcation, inaugurating an era where the Party identifies with the Army.

Tomorrow, any incident, loss of face or other mishap will be directly ascribed to the top operational commander of the PLA, who happens to be China’s paramount leader

This may not matter so much in a political context where extreme recentralisation of power and personal rule have resurfaced anyway. It is even possible that Xi’s defiant move is actually another tactic to do away with any potential opposition. But it also ups the stakes for any military conflict that China may be involved in, small or large. When China suffered a military setback in its border offensive against Vietnam in 1979, the axe did not fall on political leaders or on Deng Xiaoping himself. Tomorrow, any incident, loss of face or other mishap will be directly ascribed to the top operational commander of the PLA, who happens to be China’s paramount leader.

This is a gamble on two fronts. To the international community, that China’s leader means business, is committed to these latest moves by the PLA and will face down other nations in any conflict situation. Inside China, it also removes much room to manoeuvre for him. There is a debate surfacing, intentionally or not, in Chinese circles that opposes a ‘war party’ and advocates for diplomatic engagement, much as in the Tokyo of the 1930s. Xi Jinping now puts a lid on all this agitation, which is actually a good thing. But he also takes ownership of the choice himself. The risk – evident in the Russian context too – is that it is politically much easier for him to find the forward gear than to reverse direction.