Happy New Year and all the best wishes for 2008 from the Berlin office team!

For all those who are interested readers of the ECFR-webpage, I just wanted to put a couple of reflections on our website for a good start of our European work in 2008.

To start with: over Christmas I was reading in a Berlin life-style magazine an article about attitudes of young people born in 1990, and found the sentence: ‘They believe the EU has always been there’. (I can tell you that this is not true. But this is good, because then the EU enters into daily life and becomes just a normal part of it, including the cheap-flights from Berlin to Riga and the Erasmus-studies. However, this is bad too, because this thinking tends to make us forget that most of the European achievements (peace, single market, Euro) have not only been hard work; they can also be put into question again; and above all, it makes us forget that there is still much more that could be achieved to make the EU project complete!

2008 will therefore be an important year again. We will see decisions on Kosovo taken; the problem of the Iranian nukes needs a constructive solution and the EU should be engaged. Climate change, energy policy, CAP reform and the review-clause with respect to the EU budget are just some of the topics that the EU will need to tackle within 2008. ECFR will try to observe these policy fields closely; and it will, by the way, publish its next report on Afghanistan further to our Russia report shortly.

In addition, 2008 has a couple of interesting upcoming events: The French EU presidency will be a focal point, as France is a key-player in Europe. Seemingly, France is ready to do moves on NATO/ ESDP as much as on CAP-reform, and that could open opportunities for Europe. Further, the US election may mark a turning point and allow a fresh start in EU-US relations on many issues with a new administration. It will be very important to observe how the US and the EU will position themselves to major global challenges and problems in the month to come and where they will find common ground.

We will work on the following topics in the coming months:

– An ECFR Policy Brief on Franco-German relations focusing new dynamics of Franco-German relations and Sarkozy’s initiatives on Europe. The other day, I heard about Sarkozy’s new idea to profoundly change the structure of the UN Security Council, making space for emerging countries and regional powers from Africa and Latin America. This is something that, from a European perspective, makes perfect sense, as the EU is one of the driving forces when it comes to restructuring the international system and defending the value of multilateralism as much as new concepts of global distribution and values. This is also something the ECFR stands for.

– An ampler study on the ‘state of the Union’ for June 2008, in a political environment that is essentially marked by French EU-Presidency and US elections. The study will try to frame overall ‘Problems and challenges of the EU in 2010’, among them the leadership question of the EU, the future of Turkish accession talks and broader geo-strategic considerations.

Furthermore, we will further improve ECFR’s position in Berlin’s political life. We are quite happy so far regarding feedback and our successful launch event on November 9th. We will also try to establish a couple of smaller foreign policy events in Berlin on various topics in cooperation with other partners. Of course, the regular website activities will continue with blogging on current EU related topics! Comments and feedback are always more than welcome. I will attend various European conferences in the first part of 2008 and then report about the discussion here. The more important ones are listed in the table below: 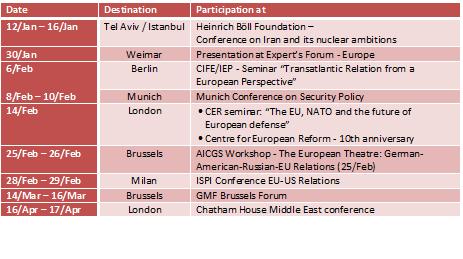