On 11 October, Belarus will hold presidential elections. They will be held in a tense atmosphere largely due to controversy over the legitimacy of the incumbent, Alexander Lukashenka. In 2010, he won (again) but as the OSCE did not recognise the results, the West imposed a series of diplomatic sanctions. These elections will also be complicated because the Belarusian economy is coming under serious pressure, due to both internal and external factors. The ongoing war in Ukraine, the drop in the global price of oil, the sanctions war between Russia and the West, as well as the dependence of the Belarusian economy on Russia have all led the country to the brink of an acute crisis.

Despite the authorities’ best efforts, the economy is fast going downhill. Industry has long been stagnant as fully 70% of GDP comes from the public sector. 20% of companies do not turn a profit and the pace of modernisation is generally slow.

There has been an increase in unemployment and underemployment. According to official estimates, there are 46 000 unemployed out of a population of nine million. This is almost twice as high as in 2014. Belarus has a system of part-time work and forced vacation. Since 2014, underemployment has increased four-fold, while the number of compulsory vacations has trebled. Overall, employment is down by 1.5%. Moreover, the average salary has fallen by $160 since the beginning of the year.

In this situation, the government has to take popular measures that are obviously harmful. Enormous sums are spent on loss-making companies in the form of grants. This has resulted in a large number of unsold products and the state has suffered huge losses ($850m). Moreover, Belarus has been plunged into a deep currency crisis. The Belarusian rouble is constantly falling against the main world currencies. Since January, it has lost nearly half its value against the dollar. 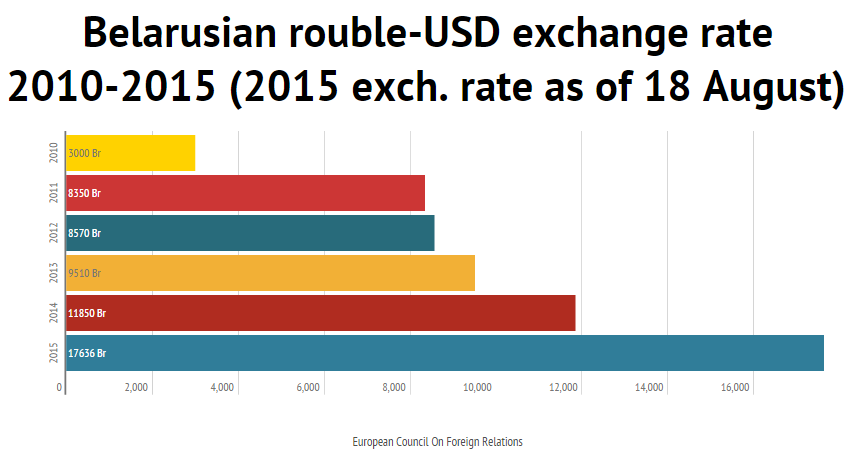 The economy needs a radically new state policy, but it would be a mistake to blame the government for everything. The fact is that ever since Soviet times, Belarus has been fully focused on the Russian market which is under severe pressure now due to sanctions and the low price of oil. The figures speak for themselves. 40% of Belarusian trade is with Russia. According to Moody's, a drop of 1% in Russia's GDP led to a drop of 0.63% in that of Belarus. Some experts predict a decline in Belarus’ GDP of up to 5-7% in 2015. 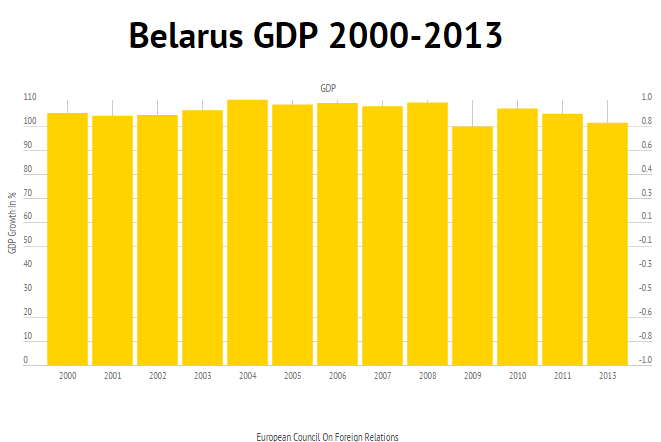 There are several reasons for this. Firstly, Belarusian exports depend on the refining of petrol products purchased at subsidised prices from Russia. Secondly, many calculations are made using the Russian rouble which automatically hits the Belarusian national currency. Thirdly, despite the coming into being of the Eurasian Economic Union, the number of non-tariff barriers for Belarusian products has actually increased over the past year due to Western sanctions on Russia and Moscow’s counter-sanctions. In comparison with last year, in January-May 2015 Belarusian total exports declined by 28% (or $4.4bn) while exports to Russia fell by 34% (or $2.1bn).

After the introduction of Western sanctions against Russia, people thought that Belarus would gain through the resale of food products, but this has not turned out to be the case. Whilst the proportion of goods sold to Russia increased from 25% to 30%, in value terms they fell by 16% to $1.3bn.

Although it has been in a sort of economic micro-crisis for years, Belarus has so far always managed to avoid defaulting. This is largely due to the use of administrative resources which might come in useful again this time (such as interventions to bolster the rouble or the subsidising of the most important factories). Moreover, there may well be a new round of talks with IFIs on reforming the economy in exchange for financial aid.

Minsk is also pinning its hopes on a recovering oil price. What is good for Russia will also be good for Belarus. And the oil price has to bounce back sooner or later, if only to avoid a collapse of US oil shale projects and offshore projects in Canada and Norway.

Diplomatic relations between Belarus and the West should improve, particularly given the August release of the political prisoners (the basic requirement for better relations with the EU). Moreover, Minsk is an active participant in the settlement of the Ukraine conflict which has helped bring the country out of diplomatic isolation. And the low level of political protests in the run-up to the elections shows that Lukashenka remains popular, despite all Belarus’ economic woes.