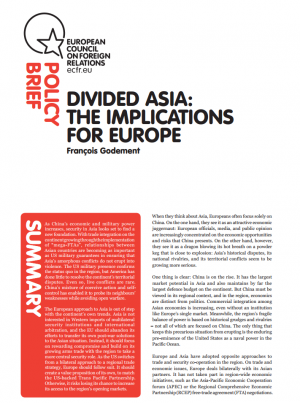 All indications are that the European Union is still having a hard time with East Asia. This is in spite of very high profile summitry: over the course of a few weeks, the EU has held meetings with Korea’s President Park Geun-hye (in Brussels), with Japan’s Prime Minister Shinzō Abe, and with China’s President Xi Jinping and Prime Minister Li Keqiang. But the meetings seem to bring out each East Asian leader’s agenda.

In Tokyo, the results were perhaps the most noticeable. The two parties signed an unprecedentedly detailed joint communiqué and announced specific moves towards a bilateral Free Trade Agreement. The EU went very far in its expression of concern over ongoing maritime issues, and it expressed sympathy for Japan’s diplomatic efforts to ensure peace. Yet Abe, who in the recent past has lobbied for European support on security issues, was not particularly gushing in his reception. Unwittingly, he may have confirmed that when the chips are down, only the United States’ hard power matters to Japan.

The same communiqués on innovation and high-tech co-operation marked Park Geun-hye’s visit to Brussels and to several other European capitals. But key issues in the implementation of the EU-Korea’s FTA – especially access to Korea’s public procurement – remain unaddressed. Park Geun-hye’s apparently spent considerable time persuading her interlocutors about the evil ways of Japan – surely a casting mistake.

The visit to China was perhaps the most perplexing. By all accounts, Xi Jinping gave a gushing welcome to the European leaders, including a three-hour dinner and an illustration of China’s plans for reform. Yet, for the first time in the history of the 16 EU-China summits, since at least 2001, a joint communiqué did not come of it. These are often the cause for pitched battles among negotiating teams, but what should we make of this absence? Instead, the two parties agreed on a joint “strategic agenda 2020 for co-operation” that lists many areas. But it mostly abstains from any foreign policy or international relations statement except the most trivial: the EU’s respect for China’s sovereignty and territorial integrity, which has a peculiar ring given the territorial disputes in East Asia and China’s support for European integration.

More worryingly, the summit did not move ahead on contentious issues: trade issues are still in the balance, and there is an ongoing question about the international practices of China’s telecom giants. China is making a high and ill-prepared request for a free trade agreement of its own with Europe; although the EU is not closed to the idea, it pointedly notes that issues about investment, public procurement, and, quite simply, a regular pattern for the High Level Economic Dialogue (for which Beijing could find no time in the last two and a half years) have to be addressed.

In sum, China welcomes sectoral co-operation, but political dialogue on international issues appears out of the scope, and bitter quarrels don’t have a resolution. Korea has found a niche for co-operation with Europe – it is the new, innovative, and creative economy – but otherwise lobbies for an issue that is far beyond Europe’s grasp: the unbelievably bad blood between Japan and Korea over tiny but symbolic territorial issues and of course the ghost of history between the two nations. Meanwhile, Japan seems more attentive to a wide European role as a global actor, but it appears that Abe’s attention is not really focused on the endeavour.

There are reasons of expediency for this situation, but also more fundamental factors on both sides. In the first category, this European Commission is entering its last stretch before the European vote next May. This probably produces a slow-down on the Chinese side. All three East Asian countries are engaged in challenging domestic change. The United States, over security issues, and their Trans Pacific Partnership proposal that is designed to capture the high ground in economic diplomacy, keep their bargaining edge.

But there are also fundamental reasons. East Asia is divided, perhaps the only world region where regional institutions play so limited a role. Europe cannot afford to prejudge sovereignty issues – although it might well take side where the form of action may threaten peace and stability. The arms embargo has tied its hands with China, and security cooperation is more of a member state prerogative in any case. Europe’s influence is indirect, and not expressed in hard power. The limitations of the European project – a split-level diplomacy and an essentially national defence – also limit its political value to East Asians.

There is worse. On the EU’s main source of global influence, trade policy, member states keep undercutting each other – and the European Union itself, of course.

The most recent and egregious example is happening with British Prime Minister David Cameron’s visit to China. He enthusiastically describes the UK as more open to investment from China than any other member state. He loudly proclaims his quest for a free trade agreement when the EU has indicated this should be the result of a step-by-step process. If his Chinese hosts really believed him, this would destroy the EU’s common trade policy – as Chirac and Schroeder did with a common security policy a decade ago, when they sold to China a lifting of the arms embargo that they could not deliver in any case.

But Cameron is by no means an outlier. Germany has undercut DG Trade and its own firms on the solar panel issue, with Merkel also forgetting her own words in the 2010 European Council on reciprocity in public procurement. France has often been more open to China in Paris than in Brussels – until, that is, friendly neighbours put China in the confidence. In Eastern Europe, China has successfully created a summit of its own with 16 nations, inside or outside the EU, and they discuss infrastructure financing in oblivion of the EU’s competence on regulations. Several Schengen states happily sell Europe’s “green card” against real estate investment (and for very modest amounts at that) in their own country.

Europe’s difficulty with China and East Asia is not unique. It has trouble finding unity with two other large partners – the United States and Russia. Finding its own internal coherence, strengthening integration and the Eurozone is hard enough.

Yet we should not delude ourselves. At globalisation’s fast pace, the capacity to conceive, implement, and enforce a bloc strategy is as important as economic competitiveness. The collective EU solution to that European problem is the least attractive, except for any other.