The square in front of Algiers’ grand post office presented a striking picture. On the steps of the imposing building, hundreds of doctors, many of them in white coats, chanted in support of a new political system. Arriving in the square was a seemingly endless procession of students from all sections of Algiers’ university system. Many engineering students wore bright yellow hard hats and carried placards demanding that Algeria be rebuilt on new foundations. Law students marched behind a banner calling for a state governed by justice and the rule of law. Economics students decried the government’s wasteful use of national resources. Across the crowded square resounded a song calling for the immediate resignation of Algeria’s aged and incapacitated president, Abdelaziz Bouteflika. Every so often, demonstrators would simply chant “Les Algeriens” over and over.

The protesters’ demand is simple: Bouteflika and the clan that surrounds him must step aside.

This was the scene I encountered on a recent research trip to Algeria. There, I spoke to protesters, opposition politicians, and civil society leaders about the demonstrations that have swept the country in recent weeks. I came away with a strong impression of the protesters’ enthusiasm, confidence, and ambition. At the demonstrations that took place on 15 March – shortly after Bouteflika announced that he would not run for a fifth term, but would stay on as president to oversee an open-ended process of political reform – it seemed that a huge cross-section of Algiers’ society had taken to the streets. Parents marched with their children. Elderly couples walking arm in arm were shepherded along by a protective knot of people. Nevertheless, it is young Algerians who are driving the protests. A retired army officer who was walking alongside a group of student demonstrators remarked to me quietly: “I was part of the system… These young people have the courage to do what my generation never did.” 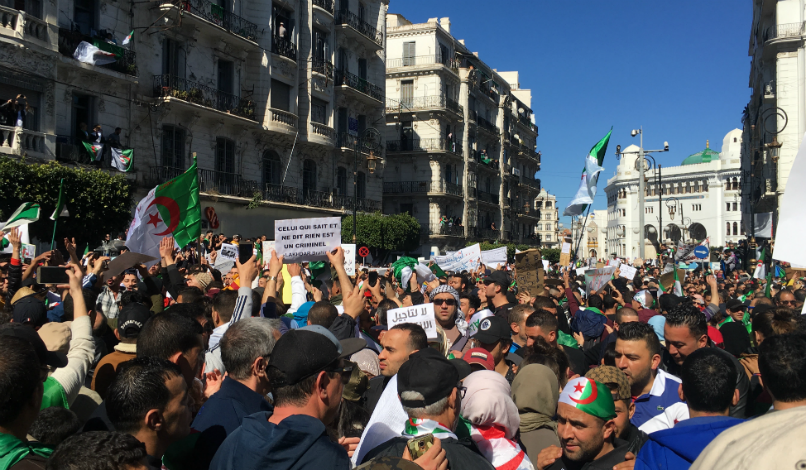 An appeal to popular authority

The rhetoric of popular unity and authority is everywhere on the streets. Indeed, one of the slogans I saw most often on placards was: “only one hero – the people”. Time and again, protesters said that the country belonged to the people but that power and wealth had been monopolised by a corrupt circle around the president. “It’s not just Bouteflika; the entire system has to change”, a young doctor told me. A middle-aged man demonstrating with his wife and a group of friends said simply: “the people are fed up with the elite”. “What we want is freedom for the people,” a vocational training instructor told me at another protest.

The developments of the last few weeks have led the protesters to increase their demands. The first large-scale demonstrations erupted spontaneously in response to Bouteflika’s announcement that he would seek a fifth term in office – despite having barely appeared in public since suffering a stroke in 2013. In the words of prominent human rights lawyer and activist Mustapha Bouchachi, this announcement left Algerians with “a sense of dishonour; a feeling that that they were being treated with contempt; a sense of shame in front of the world”. Facing these protests, the government cancelled the election but stated that the president would remain in power until a new constitution had been agreed on. Claiming that the move has no legal basis in the current constitution, the protesters switched their attention to the power structure that sustains Bouteflika’s regime.

The protesters do not share any ideology or detailed picture of the political system they envisage for Algeria. They have at most a general sense of the kind of government and society they want, sometimes describing it as a “second republic” to follow the system that has governed Algeria since it gained independence from France, in 1962. Strikingly, however, there is an apparently unanimous resistance among protesters to negotiations with the regime. “We don’t want our movement to be co-opted by the political system, in the way that the Berber protests of 2001 were,” one woman told me, referring to the last major outbreak of civil resistance in Algeria. In the words of opposition politician Zoubida Assoul, leader of the small Union for Change and Progress party, “you can’t make a transition with the people who provoked the crisis.” It seems clear that any political leader who attempted to discuss a transitional road map with Bouteflika’s political circle would immediately forfeit the support of the streets. The protesters’ demand is simple: Bouteflika and the clan that surrounds him must step aside.

In the face of this call for fundamental political change, Bouchachi sees Algeria’s interlocking network of elites  – ubiquitously known as le pouvoir (the power) – as merely “playing for time”. And other opposition leaders seem to share this view.

Meanwhile, the regime has charged veteran diplomat Ramtane Lamamra, who it recently reappointed as deputy prime minister and foreign minister, to make its case internationally. Speaking in Berlin on 20 March, Lamamra argued that the way forward lay in “dialogue with all political groups and also with civil society” but that the solution to the crisis “must guarantee that the Algerian state can continue to fulfil its obligations”. The visions of the regime and the protesters are diametrically opposed: the regime presents itself as the guarantor of an orderly transition, while the protesters see any process it oversees as inherently tainted and illegitimate.

For the moment, the vision of the streets is dominant. Algeria’s newly appointed prime minister, Noureddine Bedoui, appears to be struggling to form a credible government, having fallen behind in his announced timescale for doing so. As things stand, it is hard to believe that many experienced public figures who are not already members of regime-aligned political parties will be willing to participate in the national conference on political reform that the regime has set up. Many Algerian political actors have scrambled to distance themselves from the regime, seemingly in preparation for the next phase of the country’s politics. For instance, 13 of Algeria’s leading trade unions announced on 18 March that they would not meet with Bedoui to discuss the formation of the government, saying such talks would be “in contradiction to our position and that of the Algerian people”. In this way, the protesters have largely succeeded in defining the terms of public discourse.

The demonstrators and opposition leaders I spoke to argued that the regime’s evident lack of legitimacy will ultimately prevent it from remaining in power. Against this background, the discussion increasingly focuses on questions of how any change in leadership might take place and whether the protest movement – which appears to have been leaderless so far – needs to appoint representatives to issue demands on its behalf. Bouchachi is one of the political figures who seems to  have most credibility with the protest movement . Yet when I spoke to him in his office overlooking Algiers’ central street, a hub of protest activity, he denied any interest in such a role. 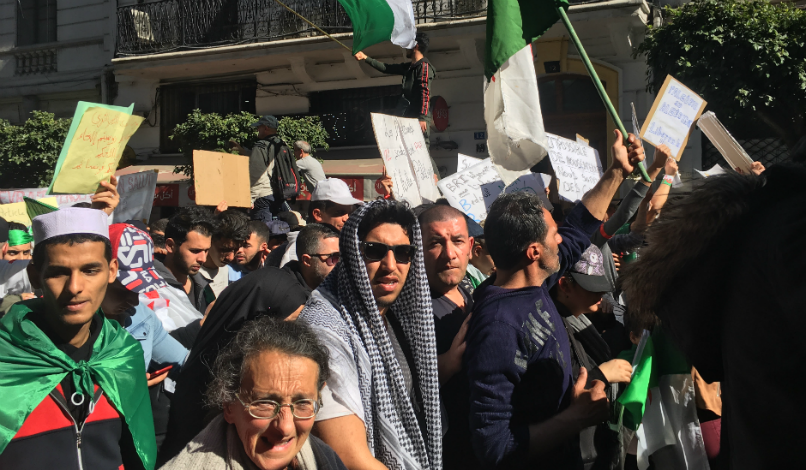 The protesters and the political opposition

“There was no party or organisation who made these people come out, it was the young on social networks”, he said. ”This is a peaceful revolution of our young and no one has the right to frame it or to try to speak on its behalf… The young should organise themselves. This is a movement that will eventually produce a leadership for the future of this country.”

In Bouchachi’s view, the protest movement should concentrate on peaceful demonstrations while opposition leaders should refuse to engage in dialogue with the regime. When he speaks to young people, he said, his main message is straightforward: “don’t lose hope. They will go. I don’t think that they will be able to hold on until the summer.” He sees the army as the key arbiter of Algeria’s future, believing it will withdraw its backing from a political clan that has lost all credibility and will throw its weight behind an alternative road map. “This is not an army that represents only one particular clan, as in Syria,” he told me. Many Algerians believe that recent statements issued by the army’s chief of staff, Ahmed Gaid Salah, which praised the patriotism and civic spirit of the people and did not mention Bouteflika’s name, show that he is already distancing himself from the government.

There is an emerging consensus among the opposition about how a political transition would proceed. A government of national unity comprising members of the political class and civil society would rewrite Algeria’s electoral laws and oversee preparations for new election. The newly elected assembly would then write a new constitution. Bouchachi argues that the process should be inclusive, involving all parts of Algerian political society aside from Bouteflika’s inner circle.

For her part, Assoul describes the protesters’ demands as a kind of collective therapy for people whom the authorities have repressed for many years. Speaking in her party’s small storefront office in a half-empty shopping mall, she told me that the role of opposition politicians was not to speak for the protesters but to create a framework for implementing their demands. As one of the key members of the Mouwatana (Citizenship) movement, Assoul was active in the pro-democracy movement before the latest round of protests . She is confident that the protesters have enough determination and leverage to achieve the change they seek. The movement “could move towards strikes if the pouvoir doesn’t budge, but it would always be in a peaceful way”, she said. “The movement must remain peaceful.”

Algeria has experienced a political dislocation in which all legitimacy has shifted to the people while the instruments of power have remained in the hands of the regime. Should their action lead to public disorder, the protesters would risk forfeiting their broad support base and allowing the regime to reassert control. They have shown tremendous restraint so far, but their patience could be tested if the authorities simply refuse to cede ground. Another big question concerns whether the army, even if it withdraws its support from Bouteflika would endorse the kind of open and representative political transition most protesters favour. It is easy to imagine that military leaders might seek to preserve the country’s broad power structures while shifting political leadership away from Bouteflika’s immediate circle. This is a moment of idealism for the crowds packed into Algeria’s public spaces; it seems almost certain that a long and uncertain process of political contestation lies ahead.