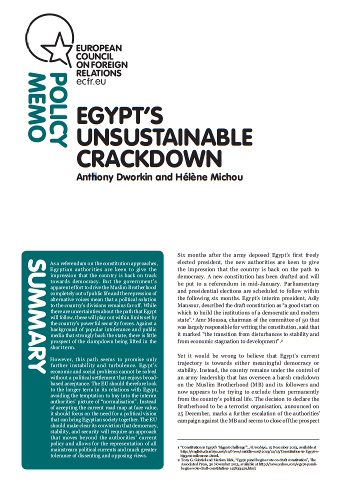 The people of Egypt will vote on 14 and 15 January in a referendum on the country’s proposed new constitution. Few people doubt that the constitution will be approved, but there is more at stake in the vote than merely adopting a new legal framework for the country. It is broadly understood in Egypt that the vote will also be a test of how far the country is willing to endorse the political settlement that has been put in place after the army overthrew the elected president Mohamed Morsi last July. There is also extensive speculation that army chief Abdel Fattah el-Sisi, the dominant figure in Egyptian politics, will study the results closely as he decides whether to run for president in elections that are expected within a few months.

Egyptian authorities are doing everything they can to ensure that both turnout and voter approval of the draft constitution exceed the totals set at the end of 2012 for the constitution drafted under Morsi’s presidency (those figures were 33 per cent for turnout and 64 per cent voting in favour). These efforts apparently go to the extent of seeking to prevent any opposition campaigning at all. According to the Strong Egypt party founded by the independent Islamist Abdel Moneim Aboul Fotouh, three of its members were arrested on 7 January while distributing posters in central Cairo urging a “no” vote in the referendum. In the present climate in Egypt, with a strong populist-nationalist mindset among the public, a media that largely repeats the government line, and official intolerance of any critical voices, it is simply impossible for a public campaign against the draft constitution to be run.

In any case, the opposition to the constitution from the handful of secular and liberal parties that have opposed it was always unlikely to be a decisive factor, given the limited support they currently enjoy. The crucial question is whether the Muslim Brotherhood continues to enjoy enough support to have a significant impact on the vote. Indeed the fundamental issue on which Egypt is really voting is how far the country is prepared to embrace a new political order from which the Brotherhood is systematically excluded.

The constitution is explicitly presented as the consummation of a hybrid “January 25-June 30” revolution, linking the uprising against former President Mubarak in 2011 with the mass demonstrations against Morsi last summer. And the referendum comes as the Muslim Brotherhood faces probably the greatest crisis of its history, after the government declared it to be a terrorist group and is apparently intent on trying to destroy it as an organisation.

The official position of the Brotherhood is that it will boycott the vote. Many people close to the movement believe it will also attempt to stage a series of protests during the referendum to emphasize its rejection of the authorities’ “road map” and discourage people from going to the polls. Despite the escalating crackdown against the organisation, MB supporters have continued to mount a steady series of protests, often centred on university campuses. While the Brotherhood continues to reject any notion of an armed campaign, its protests have witnessed a gradually increasing level of violence as supporters respond to security forces with petrol bombs and rocks.

It has been apparent for some time that the authorities in Egypt are intensely focused on ensuring a smooth vote and a strong endorsement of their political settlement in the referendum. But even if they are successful, Egypt’s divisions and tensions will not disappear. A democratic and consensual political system cannot be built in Egypt without offering a political role to the Muslim Brotherhood and allowing the political space for responsible opposition and a critical press and civil society. It remains unclear whether the so-called “eradicationist” faction within the governing elite really believes it can wipe out the Muslim Brotherhood, but most observers are convinced this attempt is doomed to fail, and will only lead to further disorder.

In the meantime, Egypt faces a genuine security threat from armed jihadist groups based in Sinai, notably Ansar Bait al-Maqdis, which claimed responsibility for the deadly attack on a police station in mid-December and a string of other incidents. Despite the Egyptian government’s rhetoric accusing the Muslim Brotherhood of terrorism, most observers believe that security forces recognise that there are no direct links between the Brotherhood and the armed jihadist groups. But the attempt to shut down Egypt’s dominant Islamist political movement can only drive wavering followers in the direction of more extremist organisations. The former coordinator for counterterrorism in the US State Department recently wrote that the Egyptian government’s turn against the Muslim Brotherhood was a “fateful error” that would make violence “the rational choice for fence-sitters”.

The European Union and other outside powers must not make the mistake of believing that Egypt’s current trajectory is likely to lead to stability or accountable government. Whatever result is reached in next week’s referendum, the current regime seems to lack any long-term political vision for the country. Its security-first approach is likely to be self-defeating even on its own terms, leading to an increase in violence. It is impossible to see meaningful reform of state institutions taking place under these circumstances, and difficult to believe that Egypt’s pressing social and economic problems can be tackled by a government that is intent on excluding a deeply-entrenched religious and social movement from public life.

The public demand for social justice, economic opportunity and a state that does not oppress its citizens remains alive in Egypt. The current crackdown can be expected to prove unsustainable. But as one experienced Egyptian diplomat recently told me, “things are likely to get worse before they get better”.