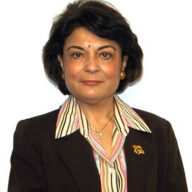 Ambassador Rend Al-Rahim is co-founder and president of the Iraq Foundation, a non-profit organization committed to the support and promotion of democracy, human rights, and civil society in Iraq.

Al-Rahim is widely recognised as a leading expert on Iraq. She travels to Iraq regularly to provide training to members of the Iraqi Parliament and civic leaders, and to strengthen cooperation with multiple stakeholders. She has collaborated with academic and research institutions, including Princeton University, the School of Oriental and African Studies University of London, and the University of Pennsylvania, as well as forums on the Iraqi Constitution. From 2003 to 2005, she served as Iraq’s chief of mission to the United States. She is the co-author, with Graham Fuller, of The Arab Shi’a: The Forgotten Muslims, in addition to op-eds and other articles in numerous publications. She has testified before the US Congress as an expert on Iraq.