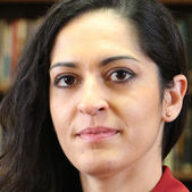 Iran, Iraq, security and geopolitics in the Middle East

She has nearly a decade of experience in international relations and security in the Middle East, having worked in academic institutions and think-tanks including King’s College London, the European Council on Foreign Relations, and the Oxford Research Group, as well as various international consultancy firms. She is a visiting fellow at the London School of Economics’ Middle East Centre and a non-resident associate fellow at the NATO Defence College. She frequently writes for outlets such as Foreign Policy, BBC News, the Telegraph, the Wall Street Journal, and the New York Times, and appears as a commentator on the BBC, Al Jazeera, Sky News, CNBC, NPR, and Bloomberg.