Greece and Macedonia need to distinguish between issues where they can agree to disagree and those where they need to agree.

This article argues that the current window of opportunity must be seized and provides a roadmap to resolving the Macedonian Name Dispute. It argues that the dispute needs to be addressed under the principles of freedom, responsibility and mutual recognition. In this spirit, the two sides need to distinguish between issues where they can agree to disagree and those where they need to agree; they need to agree to the goal for their negotiations; and they need to agree on a breakthrough and a roadmap. They also need to agree on a story, that Macedonia is a region shared between several states which must all abstain from “identity monopoly.” On this ground, a new permanent name can be agreed to and its adoption for international, not domestic purposes, can be linked to NATO membership and EU negotiations. Name options are mapped out through three levels of specificity, where the authors indicate what they believe to be the pros and cons of each option.

We believe that there is today a window of opportunity to resolve this dispute. Both the Greek and Macedonian governments are committed to a solution and therefore, presumably, to selling at home the compromises that this may entail.

The new Macedonian Prime Minister, Zoran Zaev, has clearly distanced himself from what some have referred to as the “Kitsh patriotism” or “antiquarianism” of his predecessor, Nikola Gruevski, who launched the monuments project Skopje 2014. For instance, since his election Zaev has indicated a willingness to accommodate Greek concerns by discussing changing the name of Skopje’s Alexander the Great airport. And the two foreign ministers, Mr Nikos Kotzias and Nikola Dimitrov have met and will meet again to discuss the prospects for resolving the name dispute.

In order to grasp this opportunity, discussions on a deal should be grounded in the principles of freedom, responsibility and mutual recognition.

Freedom. While the deal needs to be respectful of historical and identity concerns, people must ultimately free themselves from these concerns. Historians should not try to be diplomats, and diplomats should not rewrite history to serve their purpose. We cannot remain prisoners of contested readings of history.

Responsibility. The leaders of the two countries, but also their publics, have a responsibility to the next generation, which must be freed from this burden. Windows of opportunity can close fast, and best intentions get derailed as parties lose sight of the prize. All compromises hurt, all create risks for politicians, especially if they have to do with identity issues. Moderates must ignore accusations of treason, and arrive at a deal for the sake of future generations.

Mutual Recognition. Ultimately, this is an exercise in mutually recognizing each other’s dignity and good faith. In order to be truly transformative, each side needs to recognize not only the other side’s identity stories, sovereignty concerns and territorial integrity fears, but also their recognition: I recognize and trust that you recognize my sovereignty.

If we accept these guiding principles, how do we operationalize them?

First, the two sides need to distinguish between issues where they can agree to disagree, and those where they need to agree.  The first type of issue will require continued dialogue, involving historical or cultural Commissions and the likes. They include respective interpretations of history, interpretations which of course are not monolithic on each side. Also in this basket are Greek fears of irredentism from the other side, not only regarding territorial ambitions but also what are considered offensive claims about the so called ‘Macedonian minority’ in Greece.

There are good reasons to believe that these concerns are unfounded (ICJ judgement of December 5, 2011). But such highly political symbolic negotiations are about addressing the other side’s grievances, not one’s own beliefs. And while concerns regarding irredentism can be addressed through a formal declaration in the agreement itself, they can only be truly dealt with over time through confidence building and joint initiatives on textbooks and the like.

This leaves much on which the two parties need to agree to today.

Second, the negotiating parties need to agree to the goal for their negotiations. Something like: the goal of these negotiations is to agree on a sound basis for future neighbourly relations through honest and sincere mutual recognition between our countries and our peoples.

Third, the upcoming negotiations need to produce both a breakthrough and a roadmap.

What then of the name?

Here the two parties will need to display creativity and courage in equal measure. We summarise in the graph below what we believe the range of options are and the principles behind them.

Mapping out the Macedonian Name Dispute 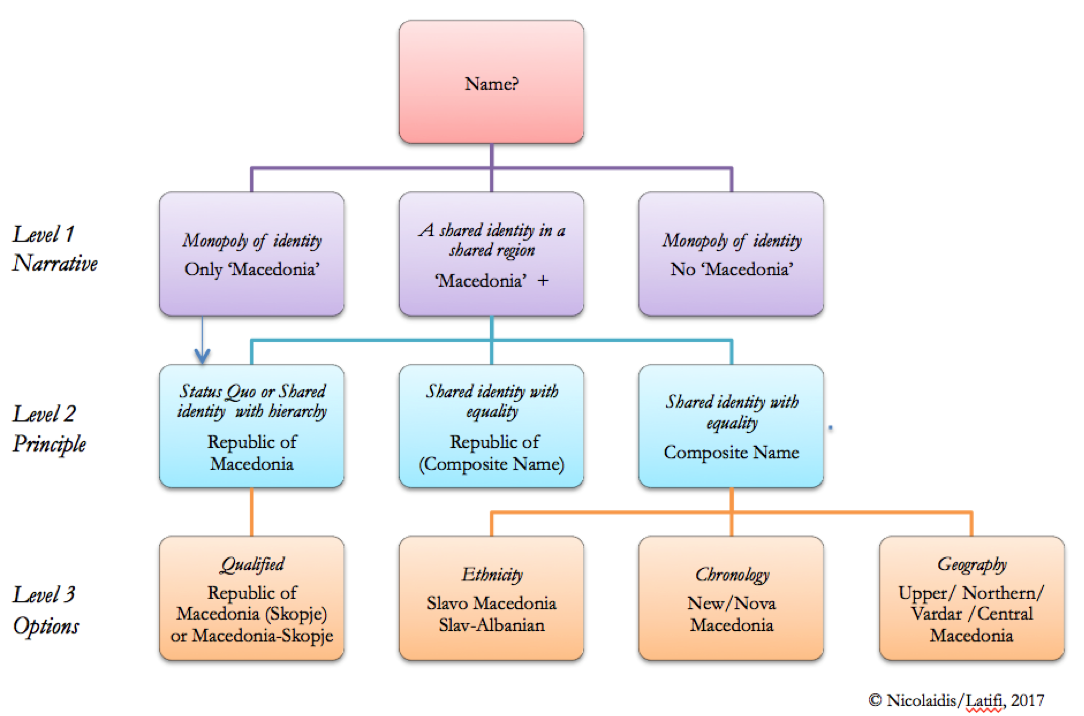 The parties need to start with a clear story – that this is a shared region inherited from times preceding the “nation-state” era. This is hardly controversial. Concretely, “Macedonia” is not a brand name but a region with shifting boundaries over many centuries, a region which is today overlaid by three or four modern nation-states. This is not just a technical issue about separating a region (spanning many states) and a state.

The original conflict between the two countries can be summarised as two sides bent on “identity monopoly.” Calling the country only Macedonia was perceived by Greeks to deny them their own Macedonian identity. The Greek retort that there should not be ‘Macedonia’ in their northern neighbour’s name at all constitutes an equally blatant attempt to monopolise the Macedonian identity for Greece. “Macedonia” should not be monopolized as an identity marker by any of the states of that region.

The truth of the matter is that national identities do not descend from heaven or ascend from the earth. They are constructed, like all social phenomena.

So this story is about sharing a collective identity, albeit a fluid one, that must be shared both by individuals who can choose to call themselves whatever they want, and by their respective countries.

But here is the twist: as part of sharing the overall “Macedonian” identity, we must mutually recognise and respect our different (national) versions of what this identity might mean. So we must agree to disagree about the historical validity of this and that claim.

But by the same token, we need to agree on a name that will reflect such recognition for all sides. Greek politicians need a name which will allow them to retain the Greek stamp over the ancient past of Macedonia as a region for domestic purposes, regardless of whether or not the rest of humanity cares. Equally, their northern neighbours need to be reassured that Greece will stop branding them as only Serbs or Bulgarians. Let they be free whoever wants to proclaim: I am Macedonian too.

From the general idea of “a shared region” many names follow. We see three generic categories:

Here again we see three categories, each privileging a certain approach to distinguishing between the region of Macedonia and the state in question and each approaching the challenge of “sharing identity” in a different way.

Is one of these many variations acceptable to the parties?

We believe so, under three sets of conditions.

The first condition has to do with the story that comes along with it. That this is a name which is about reconciliation and sharing the region of Macedonia (level 1) and therefore for international consumption: it does not impinge upon people’s lives, or dictate how they should call themselves and their language. This is not about self definition, but about formal external definition. Greeks will have to accept that their northern neighbours call themselves ‘Macedonians’ too, just as these Macedonians will have to accept that Greeks must feel unthreatened by whatever permanent international name they agree to. The story should also be about what is actually changing, eg that this is not a change of name for the country but rather the adoption of a permanent international name to replace a provisionalinternational name (Former Yugoslav Republic of Macedonia).

The second set of conditions is that the benefits that will come along with the adoption of this new name will be tangible, significant, and immediately visible: speedy membership in NATO, the start of accession negotiations with the EU, access to EU funds and support that go along with it, and other cooperative ventures. Various plans have been produced over the years which put more or less emphasis on sequencing in order to compensate for the relative lack of trust between the two countries at this stage (Skopje views Athens as a powerful neighbour which can wield its veto over NATO and EU membership at any time; Athens fears that when it loses that leverage, Skopje can break any agreement on a name without consequences). One plan proposed by ESI suggests that the name change to be enshrined immediately in the constitution only be effective initially in international relations (wherever FYROM was used before), to eventually be entrenched in the Macedonian Constitution (and therefore used erga omnes) with a referendum to take place on the eve of the country’s accession to the EU – the question being: do you agree to enter the EU under this name? Such an approach has the advantage of allowing each side to retain leverage until the moment comes. The disadvantage is that the issue would not be settled fast. Indeed, EU accession might not be on the cards for more than a decade. Other options would entail a Macedonian referendum immediately after the agreement, asking whether Macedonian citizens agree to starting negotiations with the EU and entering NATO under this permanent name to be enshrined in the Constitution. This would be more risky but also clearer to the public.

Finally, a third set of conditions have to do with the kind of confidence building and dialogue over the issues where each side have for the moment agreed to disagree as mentioned at the outset. Clearly, fears of irredentism cannot be address by a name but must be addressed by a process. Every name option mentioned above (level 3) can be interpreted as leaving room for irredentism or as opening a space for further mutual dialogue: that is up to future initiatives and the real and true practice of mutual recognition.

In the end, this is a story not only of rapprochement but also reconciliation that calls for imaginative and broad-based exchanges between the two societies. On this last count, we would like to introduce one last symbolic suggestion in addition to the above scenario. Why not build a brand new Centre for Macedonian Exchanges on the point at the boundary between the three countries which, if one visits today, appears ominously as the middle of nowhere (near Tumba Peak in Belasica). There are around 160 tri-country points in the world. One of the most beautiful one is the shared Iguazu waterfalls at the intersection of Brazil, Argentina and Paraguay. Why not make our very special Balkan one a symbol of a regional identity that is shared and therefore jointly owned, a symbol of transnational reconciliation?