On 1 July 2018, Austria assumed the presidency of the Council of the European Union. For the third time, Vienna is steering the action at the core of EU policymaking. Although the six-month presidency always places strain on the incumbent, it also provides a good opportunity to display skill and commitment in working with other member states.

The advent of the Austrian presidency raises a series of questions. Is Austria prepared for the role? How close are its connections to its peers? And how do they regard the country?

ECFR’s new EU28 survey provides insight into all these areas, showing that Austria has a complex mixture of strengths and weaknesses. In sum, the country has yet to fulfil its potential because it focuses on Germany too much, receives little response in its attempts to engage with other large member states, and neglects small affluent countries. Austria’s immediate neighbours to the east and south look to Vienna, but Vienna rarely looks back. Although Austria could work more with the Czech, Slovakian, and Croatian governments, it more often deals with Hungary.

Looking the other way

Austria’s patterns of interaction with other EU member states demonstrate its policymakers’ and political experts’ overwhelming focus on Germany. However, their German peers rarely reciprocate, placing far less emphasis on the relationship with Austria than with the Netherlands. Overall, the EU28 survey shows that Zagreb’s great interest in Austria meets with little response from Vienna. Austria often takes an interest in three of the Visegrád countries – Hungary, Slovakia, and the Czech Republic – but not the fourth, Poland. Vienna’s relationship with Budapest clearly predominates over that with the Czech and Slovak governments. 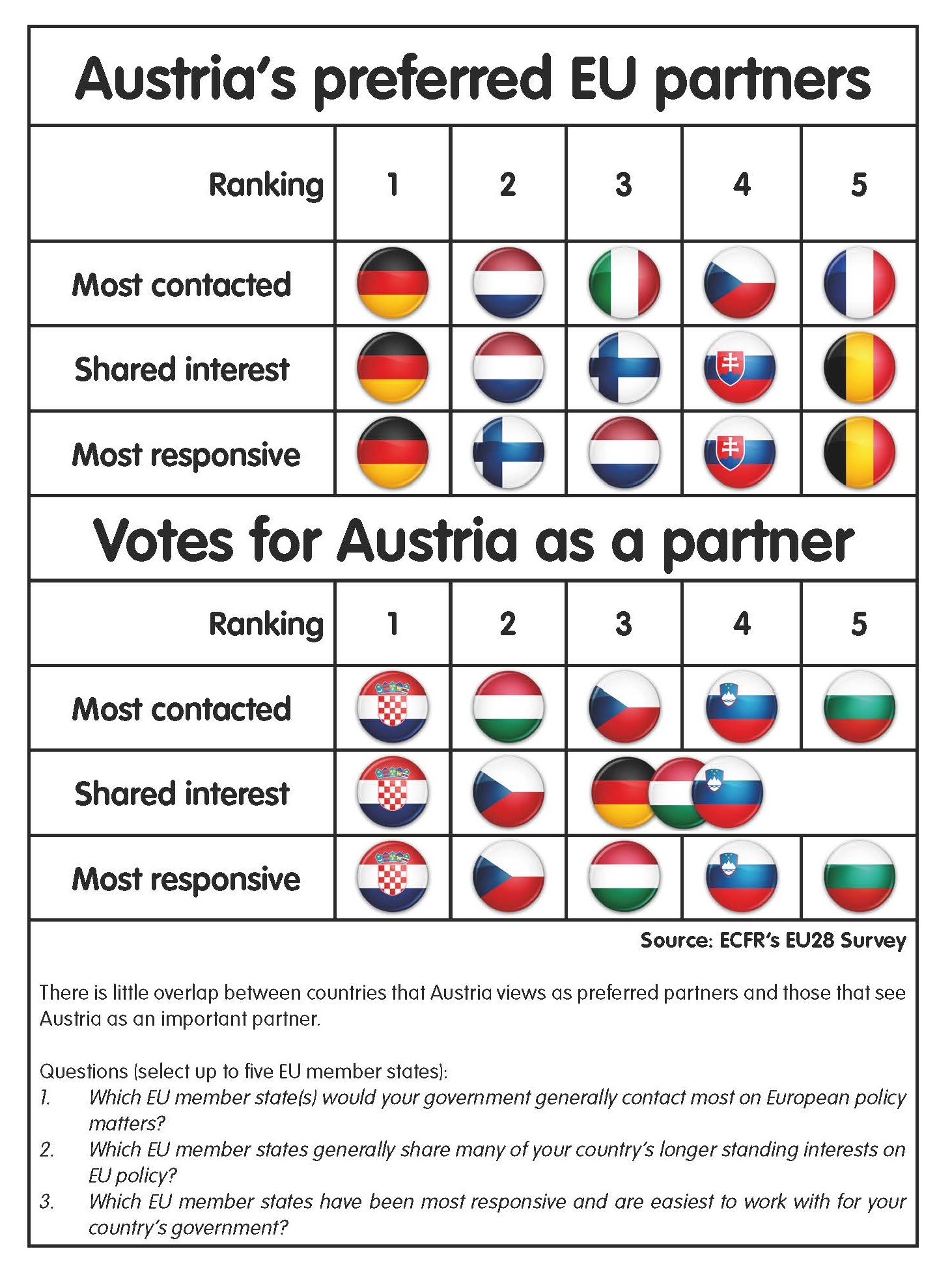 A similar pattern emerges in Austria’s perceptions of shared interest. In this area, the largest shares of the Austrian vote went to Germany and the Netherlands: 22 percent and 14 percent respectively. In contrast, only 9 percent of the German vote went to Austria. Austria received a significant share of the Croatian and Czech votes.

Responsiveness, another measure of like-mindedness, also demonstrates how Austria’s preferences rarely overlap with those of other EU countries. Austria views its most responsive EU partners as being Germany, which received 21 percent of the vote, and the Netherlands, Finland, and Slovakia, which each received 8 percent. Meanwhile, Austria received 21 percent of the Croatian vote, 11 percent of the Czech vote, and 10 percent of both the Hungarian and Slovenian votes – indicating a focus on Vienna that is much stronger than Austria’s focus on Zagreb, Prague, Budapest, or Ljubljana respectively.

Aside from its asymmetrical relationship with Berlin, Vienna has no close and reciprocal bilateral partnerships within the EU. Against this background, how do European policymakers and policy experts see Austria’s position and influence in the Union? Part of the answer to this question lies in the traditional notion of a commitment to deeper integration, or “more Europe”. Austrians’ see the integrationist camp as led by France (which receives 17 percent of the vote), followed by Germany, Belgium, and Luxembourg (10 percent each), and then Estonia, Italy, and Spain (6 percent each). Austrian respondents to ECFR’s new survey rate their own commitment to European integration at 4 percent, while other Europeans rate Austrians’ commitment at just 1 percent. Yet this mismatch, though significant, pales in comparison to that of Cypriot respondents (13 percent and 1 percent respectively) and Bulgarian respondents (11 percent and 2 percent respectively).

Among most EU national groups, France and Germany each received more than 20 percent of the vote share, due to the perception of them as the most influential EU member states. Just 16 percent of the Austrian vote lists France as having the greatest influence in the EU, while 17 percent viewed Germany in this way. Hungarian, Croatian, and Slovenian policymakers and policy experts were the only other groups to have similarly low estimations of French and German influence. Meanwhile, respondents from perceivedly influential EU countries considered Austria to have relatively little power within the Union.

Nonetheless, in the past two years, Austria appears to have become more influential among the EU’s seven small affluent member states (Sweden, Denmark, Finland, the Netherlands, Belgium, Luxembourg, and Austria). Across the EU, respondents have generally come to perceive Austria as having greater sway over border security and migration policy than any other small affluent member state. However, other members of the seven dispute this notion, with Dutch and Swedish respondents seeing their own countries as most influential in these policy areas. Overall, respondents saw Austria as the second most influential member of the seven on fiscal policy – although Belgians, Swedes, and Finns respondents bucked this trend – but as relatively uninfluential on foreign, security, and defence policy (see table below). In the latter area, Austrians view Austria as less influential than most other national groups do. 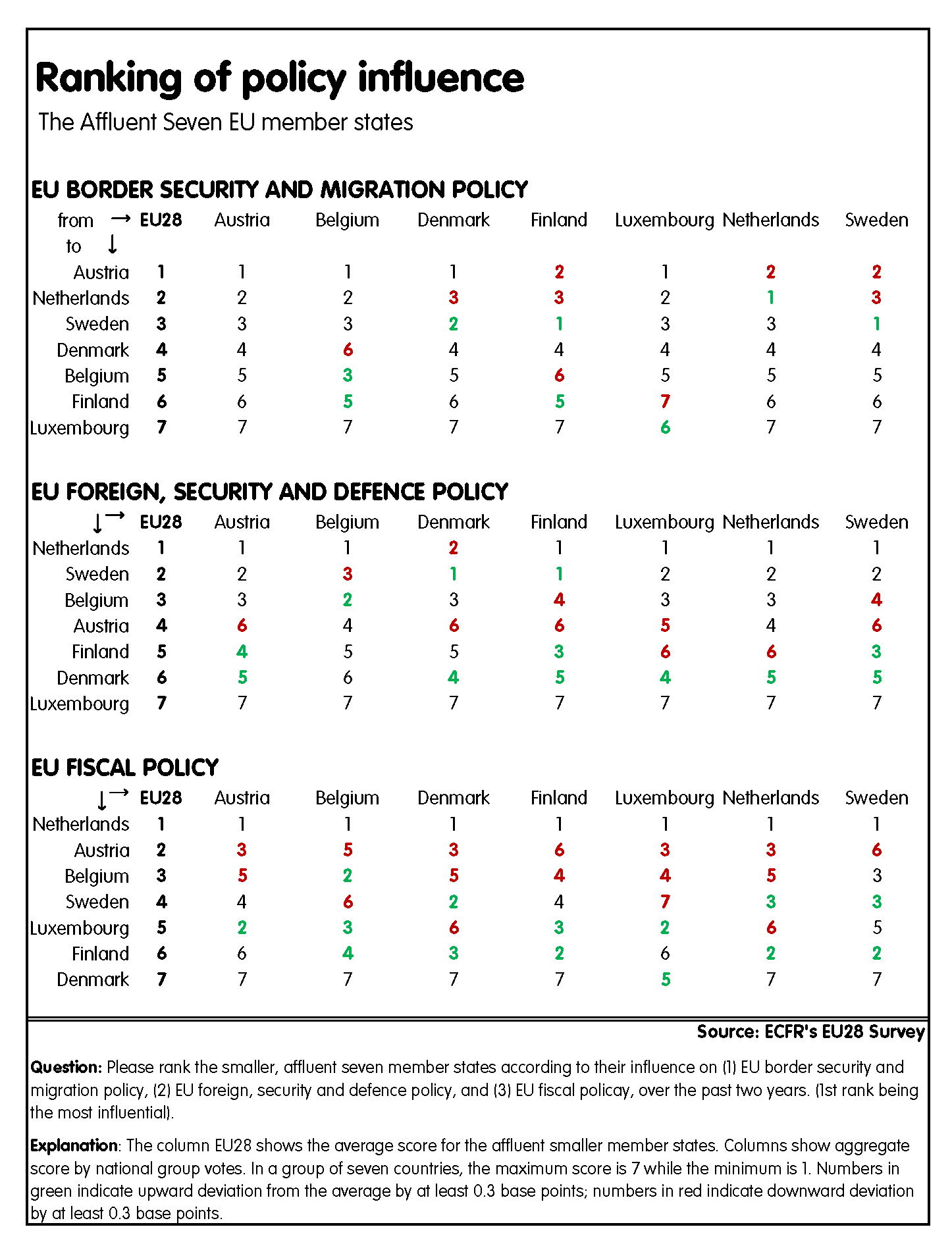 Asked about “variable geometry” or “multiple speeds”, Austrian policymakers and policy experts were generally reluctant to differentiate integration. However, only 51.6 percent of the Austrian vote share supported the idea that EU initiatives should involve every member state, compared to an EU-wide average of 56 percent. Austrian preferences for formal or informal coalitions exceed the EU average, but not by very much. Both coalition options receive an average of around 30 percent of the vote across the EU, compared to 35.6 percent in Austria. In comparison, the UK – the member state most sceptical of integration – is at nearly 44 percent.

Austrians, Germans, and Finns are convinced to similar degrees that Eurozone integration is largely a matter for coalitions. While 58.8 of the Austrian vote supported the idea that social policy is the preserve of national governments – a perspective also common in many northern and eastern member states, albeit rarely to such an extent – just 27.4 percent of the EU-wide vote backs this view. More than 70 percent of the Austrian vote listed digital policy, the integration of the single market, climate policy, and US policy as requiring an EU-wide response – a proportion higher than that for any other issue.

Austrian policymakers and policy experts are split on how the EU should pursue its foreign and security policy: 41.2 percent of the Austrian vote favours an approach that includes all member states, while the same share of the vote supports one based on a formal treaty between groups of member states. The split runs even deeper on defence policy: three approaches – EU-wide, formal coalition, and national – each garnered 23.5 percent of the vote, while around 29.5 percent went to informal coalition. No Austrian respondent said that they did not know which option to choose – making for an unusually even disagreement within a national sample.

These results raise a pivotal question: in the policy areas it cares about most, does Austria have EU partners with which it could form a coalition? According to the survey results, Austria’s top priorities within the EU in coming years will centre on migration. The border-police and coastguard priority and the immigration and asylum priority garnered 23.3 percent and 20.5 percent of the Austrian vote respectively. Austrians’ third-highest priority, common digital policy, received a comparatively low 11 percent of the vote. As the table below demonstrates, Vienna has few potential coalition partners: only a limited number of national groups share Austria’s policy priorities, receive a significant share of the Austrian vote, and often list Austria with a substantial share of their vote. 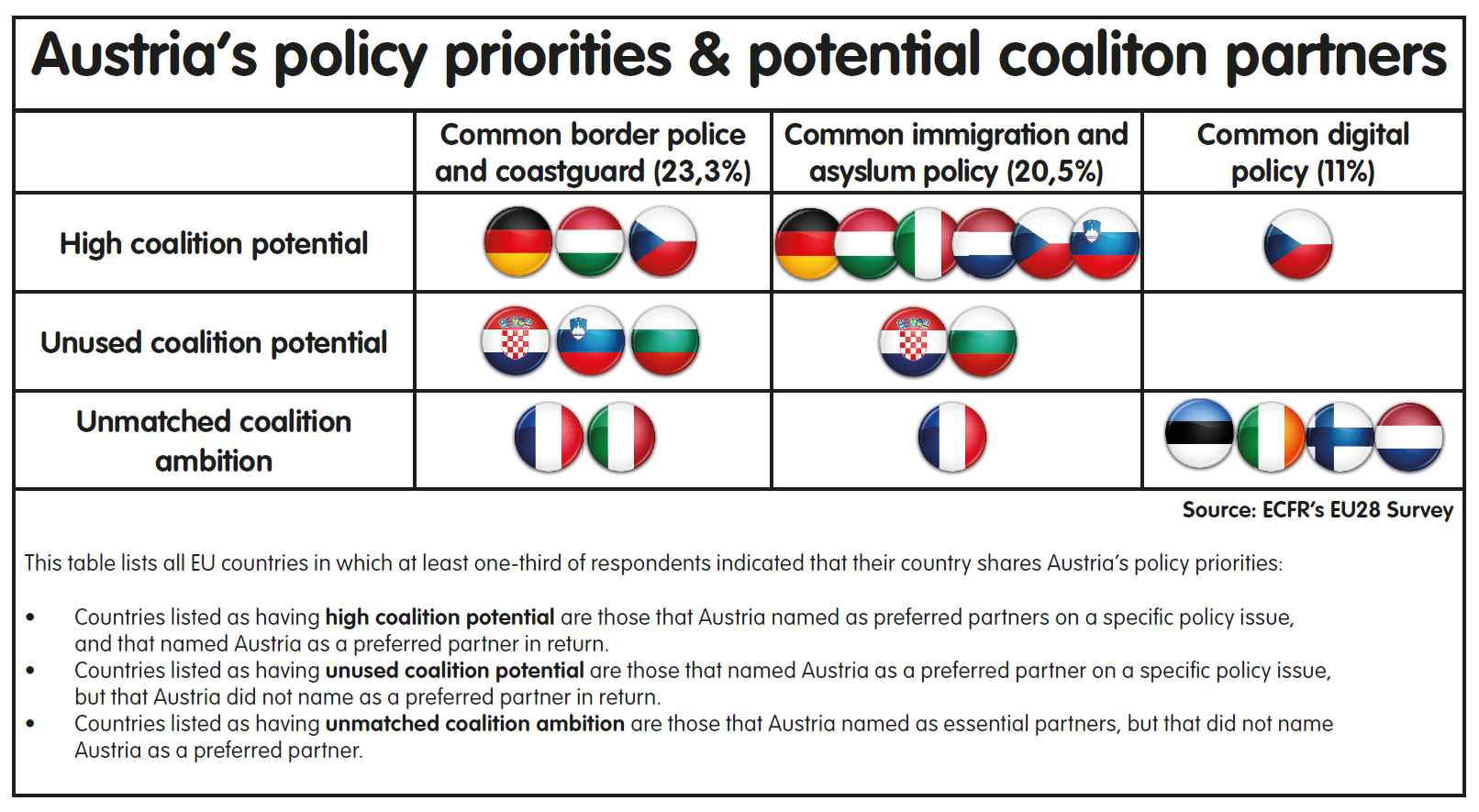 Although a coalition that includes Austria could be relatively unified on immigration and asylum issues, it would only be broadly effective if its members overcame their profound differences. Austria’s top priority has some limited potential to bring together a coalition, but it is a divisive issue – as seen in Germany’s and Hungary/the Czech Republic’s almost diametrically opposed views on it.

Other countries that Austria sees as important partners on priority issues do not regard Austria in this way: France and Italy on migration, the Netherlands on the single market, and Belgium on the Eurozone and the Common Foreign and Security Policy. Similarly, countries that saw Austria as an important partner on these issues – such as Croatia, Slovenia, and Bulgaria – received little attention from Austria. None of Austria’s perceived key partners on digital policy – the Netherlands, Estonia, Finland, Ireland, Italy, and Spain – viewed Austria in this way.

Austria will struggle to actively pursue its interests with like-minded partners that share its agenda. Yet each of the asymmetries in its relationships with other EU states reflects unfulfilled potential that the right strategy could tap.

Austria’s geographic location at the centre of Europe sharply contrasts with its political place on the margins. Vienna can hardly afford to alienate its most important partner, Berlin. However, on the key issues of immigration and border management, relations between the two are complicated. In light of the EU28 survey results, Austrian Chancellor Sebastian Kurz’s rapprochement with his German counterpart, Angela Merkel, at the European Council meeting in June 2018 seems even more necessary than it once did. The move helped prevent a breakdown in the bilateral relationship before the Austrian presidency began.

If Austria wants to develop closer links with other EU states, it still has a lot of work to do beyond its presidential duties. Its six-month tenure as president will provide a good opportunity to project an image of engagement, competence, and reliability. Although the presidency can jumpstart a country’s efforts to build networks with other member states – as some of ECFR’s survey results suggest of Bulgaria and Estonia – these efforts will only succeed if it takes additional steps to improve its position, role, and influence within the EU.

The EU28 Survey is a bi-annual expert poll conducted by ECFR in the 28 member states of the European Union. The study surveys the cooperation preferences and attitudes of European policy professionals working in governments, politics, think tanks, academia, and the media to explore the potential for coalitions among EU member states. The 2018 edition of the EU28 Survey ran from 24 April to 12 June 2018. 730 respondents completed the questions discussed in this piece. The full results of the survey, including the data and its interactive visualisation, will be published in October 2018. Findings of the previous edition, held in 2016, are available at https://ecfr.eu/eucoalitionexplorer. The project is part of ECFR’s Rethink: Europe initiative on cohesion and cooperation in the EU, funded by Stiftung Mercator.